Air pollution could be behind the 20% year-on-year rise in dementia cases, scientists warn

Air pollution is propelling an exponential rise in dementia cases around the world, a global study has suggested.

Cases of the disease are increasing at a rate of more than 20 per cent a year, most of which are in developed countries where air pollution is rife.

Scientists found people were more likely to develop dementia later in life when they were exposed to two air pollutants over a long period of time.

The researchers at the University of New South Wales are particularly concerned by nitrogen dioxide and sooty smog pumped out by old diesel cars. 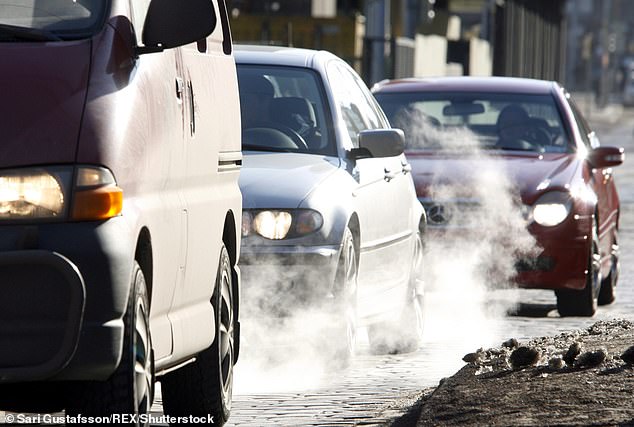 Air pollution is propelling a 20 per cent year-on-year rise in dementia cases around the world, scientists have warned 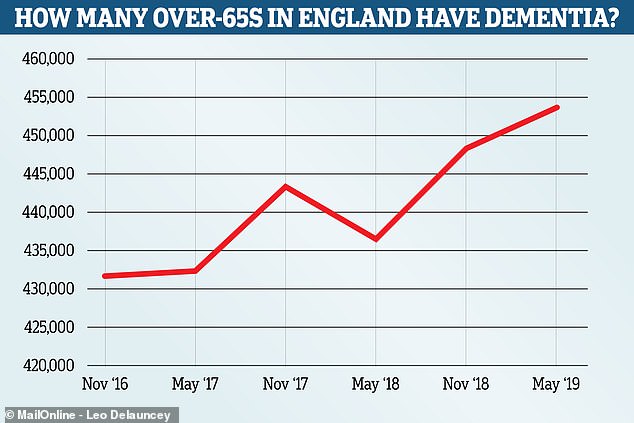 The microscopic particles in air pollution are breathed deep into the lungs and enter the blood stream.

Scientists believe they then travel into the brain where they provoke inflammation and increase the risk of strokes– problems which may trigger dementia.

The findings, published in the Journal of Alzheimer’s Disease today, provide further evidence that toxic fumes are linked to Alzheimer’s and other forms of dementia.

The disease is thought to be largely caused by genetics, with smoking, obesity and lack of exercise increasing the risk.

But the study suggests air pollution also plays a major role. More than 40,000 people in the UK are thought to die early every year because of air pollution.

Dementia is contributing to the deaths of twice as many elderly people as it did a decade ago, data revealed in June.

Figures from Public Health England (PHE) showed the memory-robbing disorder was involved in one in four deaths among people aged 75 or over in England in 2017.

This is double the number of fatalities in 2007, when dementia killed just 12.8 per cent of pensioners.

Experts have called the condition, which causes the progressive death of brain tissue and is the UK’s biggest killer, the ‘health crisis of our time’.

PHE’s figures record how many people had dementia as a contributing or underlying cause of death, so they may also have had terminal cancer or heart disease.

The statistics came just days after it was announced the number of people over the age of 65 living with the condition has hit an all-time high.

The lead author of the new study, Dr Ruth Peters, said it’s difficult for people to reduce exposure if they live where pollution levels are high.

‘However, unlike the majority of established dementia risk factors, it is very difficult for someone to reduce their exposure to air pollution, especially if they live somewhere where pollution levels are high.

‘This is concerning because the World Health Organisation (WHO) estimates 91 per cent of the world’s population lives in places where air quality exceeds WHO guideline limits.

‘This research shows that government regulation that reduces our exposure to air pollution has a huge potential health and economic benefit.’

The research team reviewed 40 studies on dementia risks in Canada, Sweden, Taiwan, Britain and the US, involving around 1,500 participants.

It is not the first study to link pollution to dementia, with researchers from King’s College and St George’s, University of London finding last year that people living in areas polluted by traffic and industry are 40 per cent more likely to develop dementia. They calculated that air pollution could be responsible for 60,000 cases of dementia in the UK.

The UK is notoriously bad at controlling air pollution, with 37 cities persistently displaying illegal levels and the Government repeatedly being hauled into court over the past few years.

Diesel cars have been promoted since the 1970s as an environmentally-friendly choice because they emit less carbon dioxide. Tony Blair’s Labour government, in particular, used generous tax breaks to persuade drivers to buy diesel cars.

The tactic contributed to the number of diesel drivers jumping from 1.5million a decade ago to about 11million today.

But in recent years scientists have realised that diesel also produces more of the tiny particles and nitrogen oxides that are damaging to our health.

Experts warn the figure will keep increasing because people are living longer and conditions such as Alzheimer’s are still untreatable.

The Office for National Statistics said the illness was responsible for 12.8 per cent of the 541,589 registered deaths in England and Wales last year.  It has been the nation’s biggest killer since 2016.

In the two years since the Government promised to publish a social care plan, families have been forced to find £15billion to support relatives with the illness.

Middle-class families are among the hardest hit because free care is given only to those with less than £23,250 in savings or housing wealth.

Dementia is an umbrella term used to describe a range of progressive neurological disorders, that is, conditions affecting the brain.

There are many different types of dementia, of which Alzheimer’s disease is the most common.

Some people may have a combination of types of dementia.

Regardless of which type is diagnosed, each person will experience their dementia in their own unique way.

Dementia is a global concern but it is most often seen in wealthier countries, where people are likely to live into very old age.

HOW MANY PEOPLE ARE AFFECTED?

The Alzheimer’s Society reports there are more than 850,000 people living with dementia in the UK today, of which more than 500,000 have Alzheimer’s.

It is estimated that the number of people living with dementia in the UK by 2025 will rise to over 1 million.

In the US, it’s estimated there are 5.5 million Alzheimer’s sufferers. A similar percentage rise is expected in the coming years.

As a person’s age increases, so does the risk of them developing dementia.

Rates of diagnosis are improving but many people with dementia are thought to still be undiagnosed.

IS THERE A CURE?

Currently there is no cure for dementia.

But new drugs can slow down its progression and the earlier it is spotted the more effective treatments are.

WHAT HAVE RECENT STUDIES SHOWN POLLUTION CAN DO TO OUR HEALTH AND BODIES?

CAUSE CHILDREN TO HAVE A LOW IQ: Researchers at the University of California, San Francisco, found in May 2019 that children born to mothers who live in polluted areas have an IQ that is up to seven points lower than those living in places with cleaner air.

CAUSE CHILDREN TO HAVE POORER MEMORY: Researchers at the Barcelona Institute for Global Health found boys exposed to greater levels of PM2.5 in the womb  performed worse on memory tests by the time they are 10.

DELAY THE DEVELOPMENT OF CHILDREN: Youngsters who live less than one-third of a mile away from busy roads are twice as likely to score lower on tests of communication skills in infancy, found researchers at Eunice Kennedy Shriver National Institute of Child Health in April. They were also more likely to have poorer hand-eye coordination.

MAKE CHILDREN MORE ANXIOUS: University of Cincinnati scientists claimed pollution may alter the structure of children’s brains to make them more anxious. Their study of 14 youngsters found rates of anxiety was higher among those exposed to greater levels of pollution.

CUT YOUR CHILD’S LIFE SHORT: Children born today will lose nearly two years of their lives because of air pollution, according to a report by the US-based Health Effects Institute and the University of British Columbia in April 2019. UNICEF called for action on the back of the study.

RAISE A CHILD’S RISK OF AUTISM: Researchers at Monash University in Australia discovered youngsters living in highly polluted parts of Shanghai have a 86 per cent greater chance of developing ASD. Lead author Dr Yuming Guo said: ‘The developing brains of young children are more vulnerable to toxic exposures in the environment.’

CAUSE ASTHMA IN CHILDREN: Four million children around the world develop asthma each year because of road traffic pollution, a major study by academics at George Washington University estimated. Experts are divided as to what causes asthma – but exposure to pollution in childhood increases the risk by damaging the lungs.

MAKE CHILDREN FAT: University of Southern California experts found last November that 10 year olds who lived in polluted areas when they were babies are, on average, 2.2lbs (1kg), heavier than those who grew up around cleaner air. Nitrogen dioxide pollution could disrupt how well children burn fat, the scientists said.

LEAVE WOMEN INFERTILE EARLIER: Scientists at the University of Modena, Italy, claimed in May 2019 that they believe pollution speeds up ageing in women, just like smoking, meaning they run out of eggs faster. This was based on them finding almost two-thirds of women who have a low ‘reserve’ of eggs regularly inhaled toxic air.

RAISE THE RISK OF A MISCARRIAGE: University of Utah scientists found in January that pregnant women are 16 per cent more likely to suffer the heartbreak of a miscarriage if they live in areas of high pollution.

RAISE THE RISK OF BREAST CANCER: Scientists at the University of Stirling found six women working at the same bridge next to a busy road in the US got breast cancer within three years of each other. There was a one in 10,000 chance the cases were a coincidence, the study said. It suggested chemicals in the traffic fumes caused the cancer by shutting down the BRCA genes, which try to stop tumours growing.

DAMAGE A MAN’S SPERM: Brazilian scientists at the University of Sao Paulo found in March that mice exposed to toxic air had lower counts and worse quality sperm compared to those who had inhaled clean air since birth.

MAKE MEN MORE LIKELY TO HAVE ERECTILE DYSFUNCTION:  Men who live on main roads are more likely to have difficulty getting an erection due to exposure to pollution, a Guangzhou University in China study suggested in February. Toxic fumes reduced blood flow to the genitals, tests on rats showed, putting them at risk of developing erectile dysfunction.

RAISE THE RISK OF PSYCHOSIS: In March, King’s College London scientists linked toxic air to intense paranoia and hearing voices in young people for the first time. They said uncovering exactly how pollution may lead to psychosis should be an ‘urgent health priority’.

MAKE YOU DEPRESSED: Massachusetts Institute of Technology researchers found in January that that the more polluted the air, the sadder we are. Their study was based on analysing social media users in China alongside the average daily PM2.5 concentration and weather data where they lived.

CAUSE DEMENTIA: Air pollution could be responsible for 60,000 cases of dementia in the UK, researchers from King’s College London and St George’s, University of London, calculated last September. Tiny pollutants breathed deep into the lungs and enter the blood stream, where they may travel into the brain and cause inflammation – a problem which may trigger dementia.