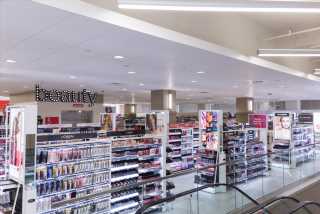 CVS is continuing the modernization of its beauty department.
Despite the drug chain's $70 billion acquisition last month of Aetna, which further solidified its foothold in health care, CVS is still committed to building out its beauty department as part of its future growth plan. An updated department layout that was piloted in four stores in 2018 is being expanded to 50 more by the end of 2019, and the retailer is also deepening its partnership with Glamsquad, rolling hair and makeup services out to those 50 stores and exclusively launching the on-demand beauty service app's GSQ product range, a diffusion line specifically designed for the mass market. The 50 stores are located in key markets such as New York, Los Angeles, Boston and Miami, and most are larger store formats that can house the expanded beauty departments.
"It actually exceeded our expectations," said Maly Bernstein, vice president of beauty and personal care for CVS Health,  of the new beauty department piloted in four stores last year. WWD reported in 2018 that in-store beauty sales could increase by five percent in the test stores.
The new crop of stores featuring the updated beauty department incorporate all of the elements of the pilot — a more dynamic layout featuring stand-alone fixtures for core brands such as Maybelline, L'Oréal, NYX, Revlon and Cover Girl; a trending beauty wall featuring digitally native and emerging brands; testers; a skin-care aisle segmented by skin type, and a Glamsquad station, now branded as GSQ. It also has some new features, including around 10 new brands — including Weleda and The Art of Shaving — and ear piercing services from Studex. In addition, Glamsquad's GSQ will debut new services, including blowouts with hairstyling for $35, kids hair and makeup for $15 each, and segmented makeup services — for example, an option to have only the eyes done. Glamsquad's GSQ product line, rolling out to stores now, is getting even bigger distribution than the 50 stores.
Glamsquad, which CVS invested in last year, worked with the retailer to identify the white space for the GSQ product line. What they came up with is a combination of hairstyling products, brushes and hot tools, as well as what Glamsquad chief executive officer Amy Shecter called "bottom-shelf basics — tweezers, eyelash curlers, emery boards," modernized with pops of color. The line consists of 50 sku's in total with an average price point of $7.99. A curling iron is priced at $39.99. Shecter said new products are already in development and said that GSQ, with its services and products launching in over half of CVS' total door count of 9,900 stores, could ultimately grow into a "billion-dollar brand" with additional expansion. "We see Glamsquad as the halo brand to GSQ and it all trickles down from the quality, luxury and aspiration from Glamsquad and trickling down to make more beauty more accessible to more women," she said. The line is to launch exclusively at CVS, and then roll out to other retailers.
For Bernstein, the expansion of CVS' beauty department is an indicator that the retailer is still bullish on the category and focused on breaking the department out of the traditional mass beauty retail mold. After a few years of consistent decline, overall mass beauty sales in tracked channels remain down, particularly in makeup. In the 52 weeks ending Oct. 5, makeup and nails were down 2 percent, though skin care showed a 2 percent jump.
As a result, CVS has brought in more skin-care brands, particularly in the clean and natural categories, such as Weleda and Zum Naturals. In makeup, "lashes are super hot," said Bernstein, so the retailer added lash services with GSQ — a purchase of false lashes at CVS will now earn you a free application service.
Bernstein said the pilot last year drew growth from not only the Millennials and Gen Z shoppers 25 years and younger, but it also increased basket size with older shoppers. "What's exciting is that the pilot stores were exceeding the growth of beauty throughout the chain," said Bernstein.