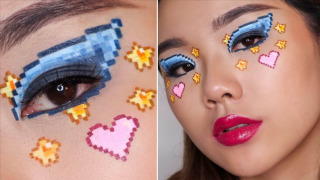 Computer and video game graphics these days are so high res, sometimes it's hard to believe you're looking at a digital rendering and not something caught in 4K. But with the 2020s already being, uh, wild, it makes sense that folks are feeling a sense of nostalgia and paying homage to simpler times — when the outside was fully open and computer graphics were a bit more low res.

It was clearly the mood 22-year-old Rochester-based influencer Sharon Wu was in when she posted a now-viral makeup look that mimics pixelated, zoomed-in computer graphics. "I got inspired by the old-timey arcade game aesthetics and wanted to create a look with 8-bit hearts," she tells Allure. "After playing around a bit, I decided to challenge myself and make the entire eyeshadow look pixelated while adding the stars and hearts in as some fun pops of color."

Wu did her research. Before a makeup brush touched her face, she sketched out the look she wanted to create on a pixel art program to get a feel of what the execution might look like. "When I drew the designs on my face, I sketched the general shape of the look first with colored pencil liners, which are easier to manipulate, and then went over the lines with water-activated liners for the final look," Wu shares. "The process became easier with time; I found it was more convenient to work in rows and columns instead of individual squares." She used the Suva Beauty Six Ten brush to create the tiny, block-like lines. It's the tool she says she favors when she's doing any eye makeup look with her water-activated liners.

Wu's work immediately inspired other beauty enthusiasts on social media, and now the 8-bit makeup is a full-on Internet trend. "I didn't expect so many people to be inspired by the look," says Wu. "I think it's really awesome to see people do different designs and create their own interpretation."

Amy, a 22-year-old master's student in Sheffield, U.K. (and a damn good makeup artist), shared her take with her 14.4K Instagram followers. Similar to Wu's look, Amy's included blue cat-eye shaped liner, as well as 8-bit hearts and stars. "I create all of my makeup looks using the same core products: eye shadow, water-activated face paints, concealer, and small craft brushes from Amazon in sized 10/0, 5/0, and 4/0," she tells Allure.

After prepping her lids with concealer,  she mapped out the base of the design with eye shadow. Then, using the face paints, she created the pixelated detailing. "I dip my brush into the paint each time I apply a new stroke to my face to maintain control of the product," she explains. "It can be very time consuming, especially on pieces with a lot of intricate detail, but it is always worth it when you get to see the final result."

Instagram cosplay queen Snitchery got in on the fun as well, posting her take on the look, which included little pixelated details on her bottom lip.

Jenn Seren, another makeup artist on Instagram, added pastel rainbows with clouds to her eyelids, making two posts showcasing her makeup creation. "More than just pixels on a screen," she captioned the second one.

This trend is giving me intense nostalgia for my teenage years on avatar-based chat platform The Palace. I used to edit my avatars, and a low-res 8-bit editor was just what I used to decorate clothing, change hair color, or even give my avatars brown skin so they could look more like me. Now, folks are using the same techniques to bring their makeup looks to the next level. To that, this old Millennial tips her hat.