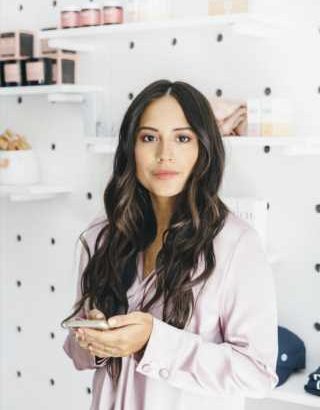 Chillhouse, the Lower East Side destination for calming wellness beverages and gel manicures, is revamping its business model.
The business has developed two different retail templates that it will focus on as it works to scale. Chillhouse flagships — the first is opening in SoHo Nov. 7 — will include manicures, pedicures, massages, facials and infrared heat treatments, plus a café and lounge and retail area. Smaller Chillhouse locations, including the Lower East Side shop, will concentrate on face and body services. Those locations will still have lounge and retail space, but will no longer offer manicures or have a café. The Lower East Side location will close Nov. 4 for a month while it is renovated.
"We're basically reconcepting that individual unit and future units that are about that size will become Face and Body studios," said Chillhouse founder Cyndi Ramirez. Having two different types of Chillhouse should allow the business to scale more quickly, she said.
Right now, Chillhouse has the Lower East Side and SoHo locations, but next year, hopes to build out two more, potentially in Los Angeles, Ramirez said. As the business expands to new cities, the idea would be to open a flagship in a core neighborhood — think West Hollywood for L.A. — and then open Face and Body locations in other neighborhoods, she said.
"It allows for simpler operations, and that way, we can control the quality of the service," Ramirez said. " studios will hopefully populate a lot faster than the flagship units."
Because the café, which includes signature Chillhouse beverage blends, will no longer be open in the Lower East Side location, Ramirez said the company is looking into bottling those beverages and eventually being able to distribute them in Face and Body locations.
At the new SoHo flagship, LES customers will be able to receive services, and visitors will be treated to an expanded menu that includes "naughty and nice grilled cheese," Ramirez said, meaning healthy and not-so-healthy grilled cheese options.
For more from WWD.com, see:
Cyndi Ramirez Fuses Beauty and Wellness at Chillhouse
After Sales Jump, Lauder Execs Talk China, Hong Kong, U.S.
As Sunscreen Ingredient Safety Questions Loom, SC Johnson Invests in Coola