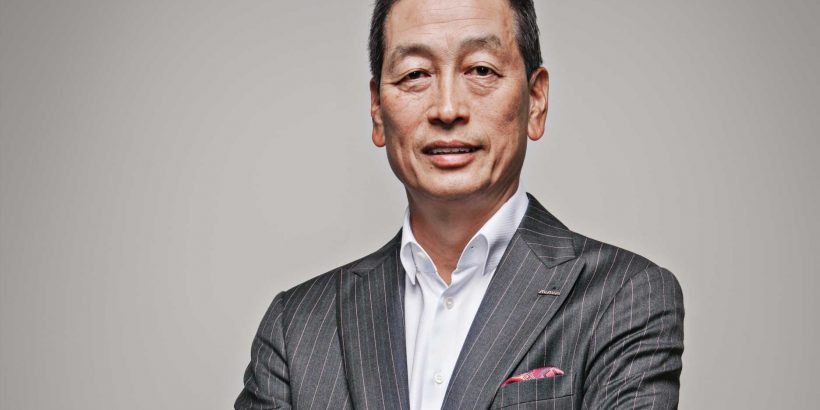 Masahiko Uotani is a human-centric guy.
By taking the helm of Shiseido in 2014, Uotani was the first outsider to be appointed chief executive officer of the business. That's unusual on its own, but taking it several steps further, the former Coca-Cola Japan head has flipped the once-shrinking, insular Japanese beauty business on its head, building out a global beauty operation that in calendar 2018 was fifth on the WWD Beauty Inc's Top 100 list, with 1.07 trillion yen in sales.
So, how did he do it? People, is the short answer, Uotani told a crowd at a Cosmetic Executive Women event in New York on Thursday.
"It's a human-led business, we're not in the business of selling big machines to other companies," Uotani said.
When he got there, Shiseido's sales had been declining for years.
"Everybody was working very hard," Uotani said. But despite new products and business practices, it didn't work. "People were so frustrated," he said.
He started going to Shiseido's beauty counters, asking the salespeople what they thought the problems were, since they are closest to the consumer, he said. One problem that came up was the "strongly controlled" nature of business. For example, sales reps needed approval before they were able to give a customer samples.
Then, he had a town hall meeting to talk to employees about the state of the business.
"In Japanese organizations, when you have meetings like this no one but that doesn't mean they agree," Uotani said. But at this meeting, one woman spoke up, and asked Uotani how employees could expect an outsider to turn the business around.
"My answer to her , 'yes, I took the challenge, but I am not going to change this company — you are going to change the company. Don't ask me how I want to change, you have to come back to me saying how you want me to change the company," Uotani said. "That's how I started."
The appointment of an outsider was not just a surprise to Shiseido employees — it was also a surprise to Uotani, who had been consulting with the business but had planned to retire and spend time playing golf with his wife in Hawaii.
"One day they came and said, 'we are working on the ceo succession and found someone from the outside.' And I said, 'wow, a traditional company wants to get someone from the outside…who is it?' And they said, 'it's you,'" Uotani said.
He talked to his wife — who is now happy with all the free beauty products — and accepted the post three weeks later, he said. But when he came on board, he knew he had to change the culture of the business in order to improve the numbers. All meetings are now conducted in English.
"It's not simply about the language, it is really working to change the culture," he said.
Uotani went on tour, talking to beauty consultants and other beauty company ceo's. One person told him Shiseido was a "sleeping beauty."
Five years later, "It's not sleeping anymore," he noted.
One of his first moves was to invest back in the business. He pledged $1 billion in reinvestment and told employees that no matter what, he'd stay the course they embarked on for three years to see if it would work.
Uotani wanted to develop a more collaborative and diverse culture, and established a global organization with key regional hires.
It's clear he delegates to them, too. Asked about which categories Shiseido looks to for acquisitions, he called on Marc Rey, president, chief executive officer of Shiseido Americas and chief growth officer, who did not proceed to answer the question from the audience.
But from the entire talk, it was apparent that people are at the heart of Uotani's strategy and Shiseido's turnaround. The business has posted a compound annual growth rate of 9 percent over the past five years, and has worked to invest and provide advancement opportunities in its employees through initiatives like learning centers.
Asked what he looks for when he hires, he ticked off intelligence first, then launched into a character description. "People who are attracted to other people, someone who you really want to talk to, someone you can be honest with problems," he said.
Going forward, Uotani expects the business to continue to grow, and sees opportunities to expand existing brands into new markets. Many Japanese brands have growth potential in Europe, he noted, and the U.S. brands have expansion opportunities in Asia.
Japan is becoming a less central part of the business — Uotani estimated that in the future, 70 percent of the total business will be outside of Japan, with about 40 percent coming from China. Manufacturing and other operations are happening globally, too. Makeup, for example, has set up a center in New York for manufacturing that Uotani said initially caused some confusion for the product development teams in Japan.
"New York is the center of makeup," he said.
But the U.S. market has its own problems right now, which he acknowledged. "It's tough. There has been a huge shift from traditional channels to online channels," Uotani said, noting that the U.S. remains the "center of the beauty industry."
But Shiseido is working to be close to its consumer everywhere. In Yokohama, Japan, for instance, the company has built an open innovation center where customers can come in. "A lot" of people have been showing up, and there, they can engage with the companies' scientists or sign up for a skin consultation and personalized regimen, he said. Some of them even lodge complains with the scientists, Uotani said.
Uotani, who went to Columbia business school in New York, says he still finds energy in travel. He has an office on the 22nd floor of a Tokyo building, but he's not especially interested in sitting in it.
"It doesn't give me any ideas. It's boring. I don't like it."
Source: Read Full Article