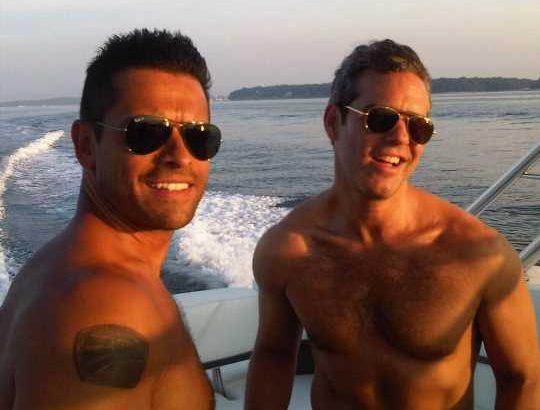 Andy Cohen is throwing it back in honor of Mark Consuelos' milestone 50th birthday.

On Tuesday, the Watch What Happens Live host, 52, celebrated the Riverdale star's special day with an Instagram post that featured snapshots from the pair's friendship over the years.

Kelly Ripa, Consuelos' wife, appeared in several shots, including one of the trio on vacation together. Moments like Consuelos sitting beside Brandi Glanville during an appearance on WWHL and Consuelos holding Cohen's son Benjamin, now 2, were also included in the post, as was a steamy pic of Consuelos and Cohen posing on a boat shirtless while wearing sunglasses.

Cohen captioned the post, "Happy birthday @instasuelos! You don't age but you keep getting better and better! (Slide #4 is my favorite) #daddyCool#mateo."

"Thank you AC ! Love you ❤️❤️❤️," Consuelos commented on the post. Ripa, who shares three children with her actor husband, also commented, writing, "Mine toooooooo 😍."

Cohen has a longtime friendship with both Ripa and Consuelos. In April 2019, Cohen and Consuelos enjoyed brunch together at Greenwich Village Italian eatery Morandi while joined by Cohen's son, who was not even 2 months old at the time.

The Bravo host captured the sweet moment, sharing a photo of Consuelos snapped while he held baby Ben up against his shoulder with his left arm and clasped a cup of coffee in his right. "I can't blame him for burrowing into @instasuelos," Cohen captioned the picture.

Consuelos, totally smitten, commented on Cohen's post, "Kid stole my heart…Ben is a straight up G with those pants."

A few weeks before the brunch outing, Cohen told PEOPLE how Ripa, 50, had helped him prepare for his newborn son. "Kelly Ripa helped me find my baby nurse, who's incredible," Cohen revealed.