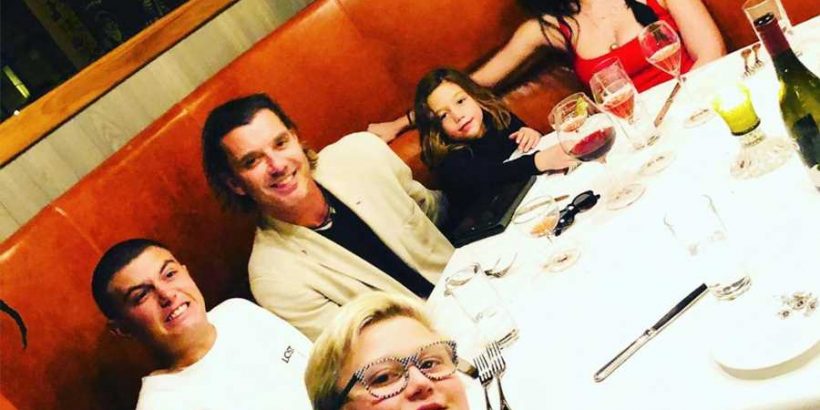 Gavin Rossdale had some extra special company at his birthday dinner!

On Wednesday, while celebrating his 54th birthday, Rossdale was joined by his four children for a festive dinner.

During the meal, the group paused for a moment to snap a rare shot together, which Rossdale proudly shared on his Instagram.

“I am in heaven – Grateful for these 4 miracles,” he captioned the image featuring his family sitting around a big table.

RELATED: Gwen Stefani and Gavin Rossdale Are in Mediation Over ‘Different Points of View’ on Parenting

Rossdale’s eldest children also turned to social media to document the occasion and wish their dad a happy birthday.

Daisy shared a snap from the evening on her Instagram and expressed her gratitude that the musician was their father.

“Happiest birthday dad @gavinrossdale we all love you with all our hearts and we are very lucky you made us ♥️🎂🎈,” she captioned a photo of Rossdale beaming as his four children gathered around him and smiled.

Kingston also added a selfie of him and Rossdale, writing alongside it, “I love you so much dad!! Happy birthday!!! 🤗❤️❤️”

Besides celebrating his birthday, Rossdale took a moment on Wednesday to reflect on his life and thank his fans for their support through the years.

Alongside a candid photo of himself, Rossdale wrote, “Thank you for all my birthday wishes – still means so much-birthdays are so fun – new year ahead – end of last year – always aiming for bliss – Thank you for being with me 🖤.📷 @lindseyblane.”

Rossdale’s birthday comes five months after the singer went public with girlfriend Natalie Golba on the red carpet at not one, but two premieres of John Wick 3.

First, the Bush frontman and the 27-year-old model stepped out for the New York premiere on May 9, making their red carpet debut as a couple. Shortly after, the pair also attended the Los Angeles premiere on May 15.

Prior to that, Rossdale dated model Sophia Thomalla for a little over a year. He was also married to Stefani, 50, for 13 years before announcing in August 2015 that they had split after an infidelity scandal rocked their marriage.

The former pair have continued to share custody of their children.

“We both just want the kids to be as safe and as happy as possible, so that’s the only focus we have,” Rossdale previously told PEOPLE of co-parenting with Stefani.