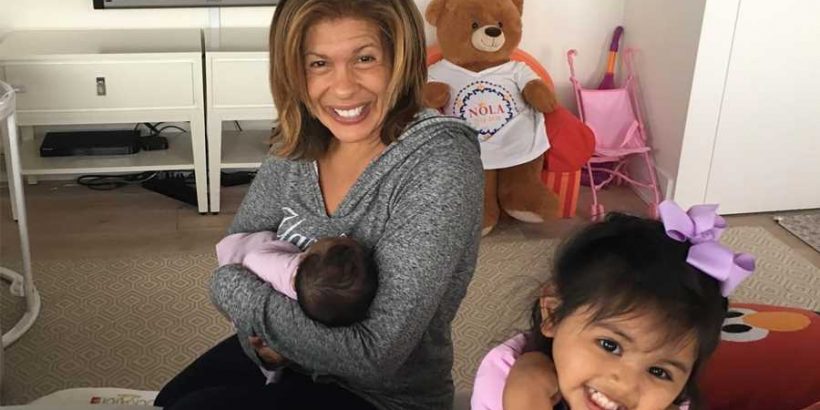 Days after she announced via phone on the Today show that she had adopted her second child, Kotb, 54, thanked her fans for their well wishes and support.

“Hope is sleeping soundly…and i am reading all of your beautiful messages. I am overwhelmed with your kindness …thank you for the love you have shown us,” Kotb captioned an Instagram photo of herself holding Hope while sitting on the couch beside smiling daughter Haley Joy, 2.

“It means so much,” she wrote in the Thursday post.

The NBC anchor also encouraged those who are also waiting for a miracle in their own life to keep the faith.

On Tuesday, the outlet shared a photo of the longtime television journalist holding her new addition, with Haley Joy standing next to her mama and new little sister with a big smile on her face.

“It’s a girl! And her name is Hope!” Kotb could be heard saying through tears over the phone as her fellow Today personalities wiped their eyes.

The show shared the same photo Kotb posted Thursday to their Instagram account, writing alongside it, “Congratulations are in order for @hodakotb, who adopted a second little girl, Hope Catherine, this week. ?.”

Kotb teased her new addition on her own Instagram account Monday, sharing a snapshot of the words “CHOOSE HOPE” in front of a stunning sky filled with clouds.

Kotb further raved about her newborn on the phone Tuesday, saying she “can’t believe” this is her new reality and adding that she’s “so happy” and having “so much fun” with her two girls.

“How’s Haley liking having a little sis? How’s she doing? Is she helping?” asked Savannah Guthrie.

“This morning at breakfast, she was trying to feed her her raspberries and I was like, ‘Not yet, babe,’ ” recalled the new mother of two.

Haley has completely taken to her new role, Kotb said: “She was literally marching around saying, ‘I’m a big sister!’ ” — so much so that “she did try to crawl into [Hope’s] bassinet.”

Kotb explained that she thought she was “full” when it came to giving love after welcoming Haley in February 2017, but her experience when she and boyfriend Joel Schiffman brought Hope home proved otherwise.

“Joel and I were standing there when they hand you the baby — and it’s the closest thing to a live birth I think you’ll ever see — [and] in that moment I was like, ‘My God.’ My heart just grew 10 times, it’s amazing,” she said. “I just can’t believe it’s happening, y’all. I can’t.”

The proud mom went on to describe the heart-melting moment Haley first met her baby sister: “We’d been telling her, ‘Baby Hope’s coming,’ and she literally walked up to her and looked at her and she goes, ‘Hope!’ “

“You hope, you pray, you dream about things, and we thought about Hope,” Kotb said of her baby girl’s moniker. “And we named her middle name Catherine after my best friend Karen, her daughter — I think you guys know that her husband passed a little while ago, and Catherine is so super strong.”