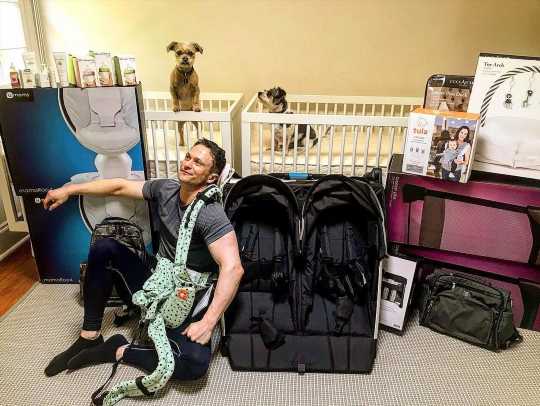 The actor, 36, and his wife Tara are expecting twins, Tucker shared on Instagram Monday, posting a photo of himself surrounded by baby products.

With a sheepish look on his face, the dad-to-be is backed by double cribs (both currently occupied by the couple’s dogs) and items like DockATots, 4moms Breeze playards, mamaRoos, a Thule double stroller, Baby Tula carriers, Wash with Water skincare products and Comotomo bottles.

“This is not an ad. This is real life,” Tucker joked in the snapshot’s caption. “And please support your local brick & mortar stores.”

Party Time! The View Throws Pregnant Abby Huntsman a Surprise Baby Shower for Her Twins on the Way

Tucker’s rep exclusively confirmed to PEOPLE in February that the couple are expecting. The twins will be their first children.

The Westworld actor and Tara — who, as of 2012, worked as the director of development at Identity Films — tied the knot at New York Public Library in N.Y.C. that year, The New York Times reported.

While Tucker is fairly private when it comes to his personal life, the star took to Twitter on Mother’s Day 2015 to express well wishes to anyone who was affected by the holiday.

“To those who can’t have children, wanted them, lost them, lost moms, didn’t have moms, wanted better moms: thank U for all the love u give,” he wrote.

Aside from his turns as Jay Kulina in Kingdom and Major Craddock in Westworld, Tucker is also known for his roles on Snowfall and The Black Donnellys, as well as in films like The Texas Chainsaw Massacre (2003) and The Virgin Suicides.

He will next appear in this year’s Charlie’s Angels movie reboot alongside Kristen Stewart and Elizabeth Banks — his first big-screen role since 2010 — as well as in the upcoming Kevin Bacon-led Showtime series City on a Hill.