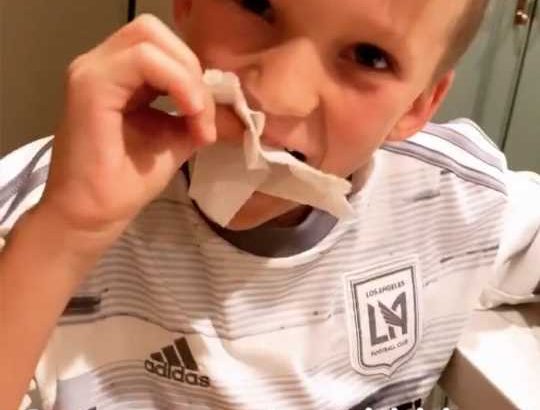 Looks like the tooth fairy will soon be paying a visit to Bingham “Bing” Hawn!

Kate Hudson‘s 8-year-old son was stoked to show off his latest conquest — a lost tooth! — in a video his proud mama shared to her Instagram Story on Monday evening.

“Ohhh! Let’s see, let’s see!” the actress and businesswoman coaxes Bing, as the camera pans downward and the little boy points to his extracted tooth, sitting on a counter.

“Oh my goodness. Let me see,” she tells her middle child, who then opens his mouth in a wide grin to show his newest gap and laughs along with his mom.

Jenna Dewan’s Daughter Everly, 6, Gets a Visit From the Tooth Fairy: “No More Front Teeth!”

Kate also used the bonding session to chat with Bing about her new podcast Sibling Revelry that she hosts alongside his uncle: her older brother and fellow actor Oliver Hudson.

“Uncle Ollie is obsessed with [getting to] No. 1,” she tells her son. “But I don’t think that that should matter because … “

“He’s not No. 1,” Bing deadpans, to which Kate replies, “Being two is also fun! … ‘Cause we’re so grateful for where we are, so don’t listen to Uncle Ollie.”

“Because he’s not a star,” Bing roasts his uncle, causing his mom to let out a huge laugh as her son adorably realizes he may have been too harsh on Oliver, 43.

Bing recently accompanied Kate, his 15-year-old big brother Ryder Russell and Mom’s boyfriend Danny Fujikawa to a Los Angeles Lakers game, where they sat courtside to watch the team play local rivals the Los Angeles Clippers during a game at the Staples Center.

On her Instagram Story, the mother of three shared a hilarious clip of the family driving to the game, where Fujikawa, 33, and Ryder played around with fake Irish and British accents.

For the outing, Kate wore a denim shirt and jeans, while her younger son rocked a Clippers jersey and hat and Ryder wore a black Clippers hat and a white sweatshirt. Based on their apparel choices, the family cheered on the winning team, as the Clippers went on to defeat the Lakers 112 to 102.

Not in attendance at the basketball game was Kate’s youngest child: 13-month-old daughter Rani Rose, whom she shares with her musician boyfriend.