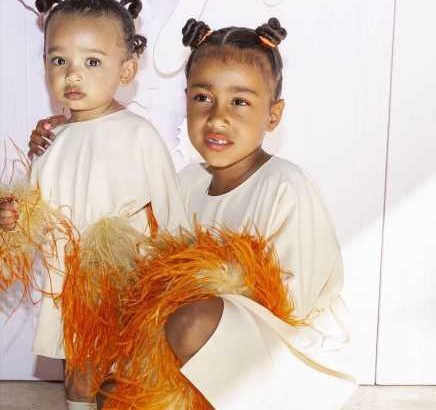 For their cousin’s big day, North and Chicago both sported beige dresses with feathery orange embellishments on the sides and the front.

Kardashian West, 38, wore a beige dress similar to that of her daughters, complete with a pair of high heels.

North also opted to wear a pair of her mom’s high heels. “She would not walk out of the house without my shoes,” Kardashian West said at the time.

The budding fashionista has a habit of raiding her mom’s closet, as Kardashian West hilariously explained on Instagram last month with a photo set of North having a meltdown after being told she couldn’t wear her mom’s high-heeled pink snakeskin boots.

“Sooooo Miss North dressed herself and thought she was ready for the day until I explained she couldn’t wear my boots,” Kardashian West wrote April 24.

In one photo, the Keeping Up with the Kardashians star is photographed from the back holding Saint as he smiles excitedly to someone out of frame.

In another, Kardashian West holds their youngest child in her arms while her rapper husband stands at her side in a gray sweatshirt and white pants, and Saint runs out of the frame with North looking on.

A fifth photo shows the sweet sister bond between North and Chicago, as North squats next to her younger sister and the two pose together.

Kardashian previously shared the girls’ outfits to her Instagram story, showing North toting around Chicago in her arms despite mom’s insistence that she put her sister down.

“How do you do this in heels? Okay, okay, put your sister down. No no no, I said just … ” said the KKW Beauty guru as North finally obliged and placed Chi on the ground next to her. “Northie, you gotta change into the shoes.”

The outing was one of the last ones the Kardashian West brood will enjoy as a family of five, as Kim and Kanye are currently expecting their fourth child via surrogate.

Kardashian West celebrated the new arrival last week with a “CBD & Meditation”-themed baby shower, during which attendees all received a pair of navy blue Yeezy slides and took part in a sound bath.

Guests also participated in a “Name Game” board, where they suggested unique monikers for the impending bundle of joy.

Kardashian West on Saturday also shared a sweet photo of Saint leaning in to kiss Chicago on the cheek with the caption, “My babies are my life!!”