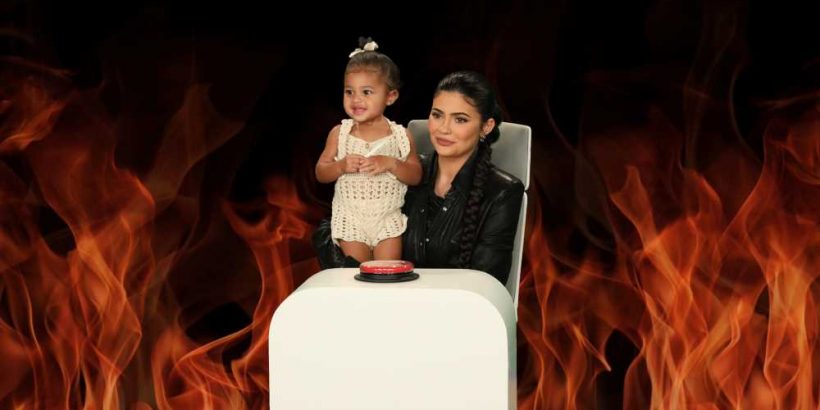 Stormi Webster adorably joined her mom for Ellen DeGeneres‘ viral segment “Burning Questions” this week, during which the 19-month-old stole the show with her cute responses.

Jenner, 22, opened up about Stormi’s close relationship with dad Travis Scott, including the funniest thing that the rapper does with his baby girl.

“When him and Stormi play together, it’s the most funny thing ever. They scream and they yell, and he makes her fly all over the house,” the mother of one shared. “They have so much fun together.”

As for the celeb the Kylie Cosmetics mogul would like to collaborate with, Jenner chose her daughter. “We have yet to collab, and I would love to collab with you,” Jenner told her toddler.

Kylie Jenner Reveals Her Biggest Fear Is “Dust in a Cup”: “I Don’t Know Why”

But Stormi had her dad on her mind when Jenner asked her, “Who loves you the most?”

After she said, “Daddy,” the Keeping Up with the Kardashians star shrugged and quipped, “Every time!”

Jenner later called her baby girl “the best gift” she has ever received from Scott, 28, whom she also joked “smells like weed a lot.”

Also during the rapid-fire mother-daughter Q&A session, Jenner revealed more than a few intimate details about herself and her family.

From the biggest mess Stormi has ever made (keep the M&Ms away from her!) to the secret she kept from momager Kris Jenner during high school, the star held nothing back while in the hot seat.

But perhaps the most shocking revelation came when she was asked about her biggest fear: “dust in a cup.”

“I don’t know why,” Jenner admitted. “One of my pet peeves is when there’s a lot of dust in a cup and then I think it’s, like, getting in my system.”