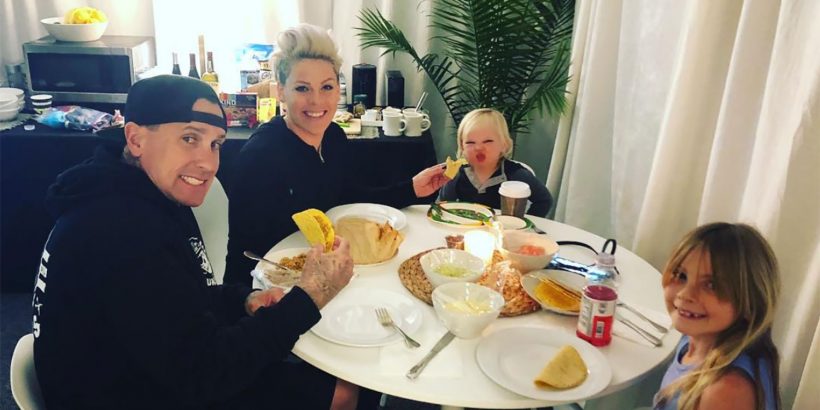 Pink has no time for the haters.

The singer, 39, shut down a troll who criticized a family photo she shared via Instagram on Friday. The sweet photo shows Pink sitting down for dinner with husband Carey Hart, 43, and their two children, daughter Willow Sage, 7, and son Jameson Moon, 2.

“At least twice a week on tour, we shut the door to the outside world and have family dinner,” Pink captioned a photo of their smiley taco night.

In an exchange first spotted by Comments by Celebs, a user commented on the post, “Except it’s posted on ig,” appearing to call out the hitmaker for posting about shutting out “the outside world” on social media.

Pink responded, “yes I like to promote healthy stuff. I also like to remind people to stop being TOTAL D— BAGS TOO. Consider this your reminder, f—o.”

After the commenter replied, “and well damn, I was coming to see ya Sunday night in Nashville…still love the music,” Pink responded, “that doesn’t change my answer. That just makes you confused.”

Pink has been open about her parenting journey on social media, especially as she travels around the world on her Beautiful Trauma tour. On Friday, the pop star posted a sweet snap of her children cuddling in a homemade fort in Charlotte, North Carolina, while Pink had the day off from performing.

“Fort city,” she captioned the photo.

Pink has also shared photos of the kids watching her perform and hanging out backstage. “Baby boy, you’re too much cuteness in one little body,” she captioned one photo of Jameson.

“Shooting the s— before the first show,” she wrote on another photo of both kids backstage.

In April 2018, the musician opened up about parenting for the cover of PEOPLE’s Beautiful Issue.

“The thing about parenting is you never know if anything you’re doing is working,” she said. “That’s been the most humbling thing for me. In my head, I sound amazing and then I turn around and her eyes are completely glazed over. I have no idea. We’ll see.”

“I believe in affection,” Pink said of her parenting style. “I believe in needs being met and faith being implemented, and I believe in letting your kids know they can count on you, and that you’ll be there. My parents obviously did not believe in that and I worked out okay. I always tell Willow, ‘I’m going to teach you the rules so that you’ll know how and when to break them.’”