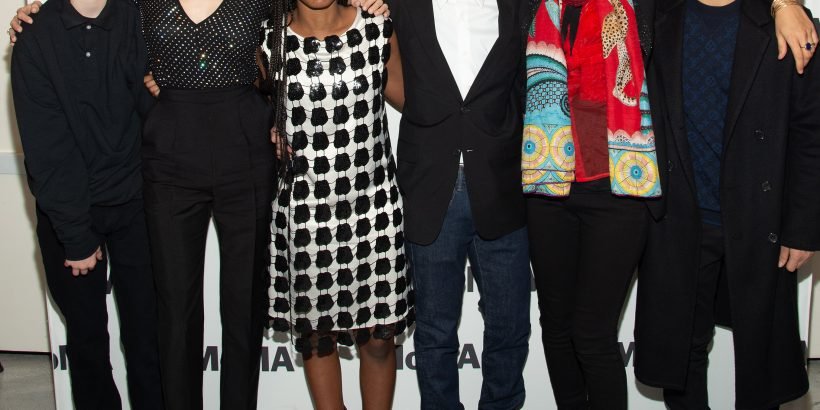 Days earlier, her four oldest children joined her for the New York City premiere of Serendipity, posing with filmmaker Prune Nourry on the red carpet.

Jolie’s daughters were once again her guests of honor, this time for the Feb. 3, 2018, Annie Awards — which celebrated the best animated films of the year — in Los Angeles. Jolie was on hand to celebrate the film The Breadwinner, an animated movie about a headstrong young girl in Afghanistan who disguises herself as a boy in order to provide for her family. The film, which Jolie co-produced, won the award for best animated feature-independent, and is up for an Oscar at next month’s ceremony.

Jolie was beaming on Jan. 9, 2018, as she attended The National Board of Review Awards Gala in New York City accompanied by her daughters Shiloh — who’d broken her arm while snowboarding and wore a black sling over a black suit — and Zahara.

Pax scored the VIP role of date for Mom’s outing at the Jan. 7, 2018, Golden Globe Awards in L.A., at which Jolie’s film First They Killed My Father was nominated for best motion picture – foreign language.

Maddox and Shiloh were back at it on Dec. 16, 2017, joining Jolie at Bangsokol: A Requiem for Cambodia at BAM (Brooklyn Academy of Music) in N.Y.C. along with First They Killed My Father author Loung Ung, film director Rithy Panh and composer Him Sophy.

On Dec. 15, the filmmaker brought along four of her children to accompany her to the 2017 United Nations Correspondents Association Awards at Cipriani Wall Street, where Jolie was honored as the 2017 UNCA Global Citizen of the year. She was photographed at the event alongside her sons Pax, Knox and daughters Zahara and Shiloh. While the actress’ other two children  — Maddox and Vivienne — were not present for the event, there was a good reason why they decided to sit the night out. “Vivienne had an upset tummy and big brother Maddox stayed with her,” a source told PEOPLE.

On Oct. 20, 2017, Jolie hit the red carpet with two special ladies by her side: daughters Shiloh Jolie-Pitt and Zahara Jolie-Pitt. The mother-daughter trio looked close as can be as they smiled and posed for photographers at the TCL Chinese 6 Theatres where The Breadwinner, the upcoming animated film about a headstrong young girl in Afghanistan who disguises herself as a boy in order to provide for her family, was having its Los Angeles premiere. (Jolie served as a producer on the film.)

Jolie’s whole family joined her on Sept. 11, 2017, at the Toronto International Film Festival premiere of her new movie, First They Killed My Father. Wearing a one-shoulder black Ralph & Russo dress, the proud mom was all smiles on the red carpet as she put her arms around her sons Pax and Maddox who both worked behind-the-scenes on the movie. The trio was also accompanied by Zahara, Shiloh and twins Knox and Vivienne.

Thanks to their special behind-the-scenes status, Jolie’s older sons got a special red carpet pic with Mom, too! “They worked hard,” Jolie told ET of her two oldest kids.

It was almost the same situation in Toronto the night before, when Jolie brought everyone but Maddox and Pax to the premiere of her other upcoming film, The Breadwinner, which she helped produce. At the festival, she shared, “I did start to get into acting and I did it partially because it was something to do with my mom and it made her so happy … I haven’t done much since she passed away, in front of the camera. Now I do it for my kids. And I do love it! It is fun! Who doesn’t love to get silly?”

The doting mom led the way from the car to the red carpet, as only a movie star can.

She shared a squeeze with her three youngest before facing photographers.

One of the young stars of First They Killed My Father, Sareum Srey Moch, joined the family, too.

This time, it was Moch’s turn to lead the way!

Jolie smiled proudly at (from left) Shiloh, Knox, Vivienne and Zahara at the Sept. 10, 2017, TIFF event.

Jolie’s six children initially joined her press tour at the Telluride Film Festival in Colorado on Sept. 2, 2017, for the First They Killed My Father premiere.