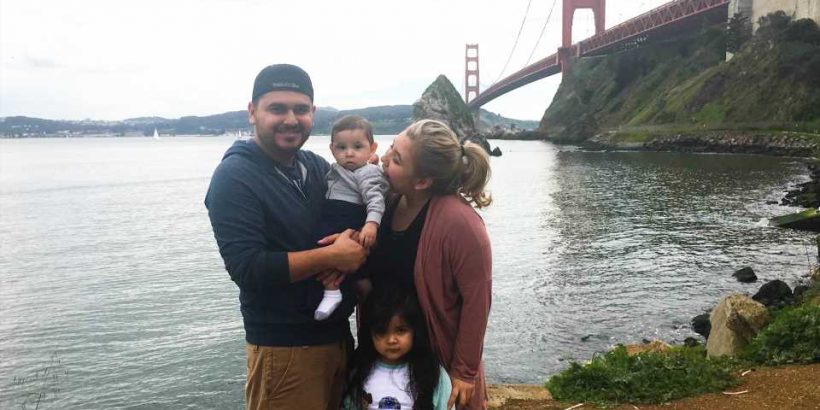 Karla Benavides planned to be a lawyer. But when she had her first child in 2013 at 19, everything changed. In high school, she used her restaurant paycheck for outings with her friends but, suddenly, she had a child to support. "I never really thought about saving money, and I was never big on budgeting," Benavides says.

After having her second child in 2016 and getting pregnant with her third, born in 2018, Benavides became a stay-at-home mom and the family began to live off just her husband's income.

"I was like, I cannot afford diapers for two," she remembers. "I cannot keep going to Target and spending $200 for shampoo, body wash, toothpaste, and diapers." Benavides knew she had to find a way to help her husband with their single income. That's when she discovered couponing. While visiting flea markets in Los Angeles, where she and her family live, Benavides noticed that a lot of the everyday supplies she needed were for sale. "I once asked a lady how she got all her supplies, and she mentioned to me that she coupons, and that's how she's able to buy her products," she says.

After that, Benavides discovered a whole coupon community on just about every social media platform. Inspired, she decided to learn as much as she could—it took about a month before she tried using a coupon herself. The first coupon she used earned back $2 for buying a certain shampoo. From there, she did one weekly coupon transaction until she felt ready to start combining coupons—a practice known as stacking, which secures the biggest discount or money back from a single purchase.

Things escalated quickly and Benavides got really good at couponing. After her third month, she built a nice little stockpile of necessities like shampoo, toothpaste, and razors. In fact, she realized she had enough of these items to last her family an entire year.

Once she got the hang of coupon stacking, Benavides began to post her hauls on social media. "That's when I started getting comments of people asking me, 'Oh, how did you buy this? How did you do this?'" she says. "So then I would just reply. I always reply to my messages, to my comments."

Now she saves her family more than $8,000 a year because of coupons. "I can coupon everything and anything from laundry items to beauty items to my kids school supplies, clothes, and toys." Because she's low on storage space, Benavides doesn't often coupon groceries. But her strategizing still makes a significant financial impact.

Ultimately, couponing has made Benavides more financially aware. By avoiding those trips to Target, she's no longer buying things she doesn't need. And on top of growing her weekly stockpile, she's also donating and selling some of her purchases.

"With that extra income that we had, we were able to do so many things," Benavides says. "We were able to remodel our home, buy a new car, and go on so many road trips with our kids."

Since that first cash-back coupon, she's carved a niche educating other moms on how to save tons of money with coupons. Better yet? She does it all through accessible platforms like TikTok and YouTube.

Curious about how you can get started on saving through couponing? Here's Benavides's best advice.

1. Treat it as a learning process.

When she first started, Benavides got out a notebook and got to work. "I would write down, 'OK, what does this coupon mean? How can I use this coupon?'" From there, she started reading store policies to understand exactly how the coupons worked. "It's honestly not that hard, it just takes a little time reading," she says.

2. Use social media to your advantage.

There are so many people out there—like Benavides—who can help you. "I started by following a ton of people who had more experience," she says. "They will post breakdowns of deals that are happening and what you have to do, what coupon you have to use, and stuff like that."

3. Pick one store to start with.

If you try to use coupons at a bunch of stores right off the bat, it can get overwhelming fast. Benavides recommends picking one store where you shop often and starting there. For her, that was CVS because it was right down the street from her house. "That's where I picked up an ad, saw the coupons that I had, and [compared them to] the deals that were in the ad," she says. "I would just try to match them, say, 'OK, if this is on sale two for $5, and I have a coupon that takes $2 off when I buy two, essentially it comes out to $3 for every item."

4. Set a budget, and know what you’re looking for.

Benavides initially dedicated $20 a week to couponing. Each week, she tried to identify what items she needed. If she couldn't find a deal for it, she'd wait a few weeks, because she knew it would come up eventually. "I would still only coupon what I needed, because when it comes to couponing, there will always be a deal. It's just about waiting for that deal to come," she says. In weeks when she couldn't find what she needed, she'd use her $20 on items that were still essentials. That's how she developed her stockpile.

5. As things get more complicated, do the math ahead of time.

Sitting down with your coupons and writing out a plan is one of Benavides's top tips. It'll help you figure out how much you'll be spending, spot opportunities to combine coupons, and ensure you're getting the items you need.

6. Get ready for some trial and error.

Benavides learned by simply making mistakes."I used to go into a store and then just see what I could try," she says. "A lot of cashiers are super friendly. When I would try to stack certain coupons and see if that was the way to use them, they would tell me, 'No, you have to use them this certain way." In the end, making mistakes helped Benavides master couponing.

This story originally appeared on Parents