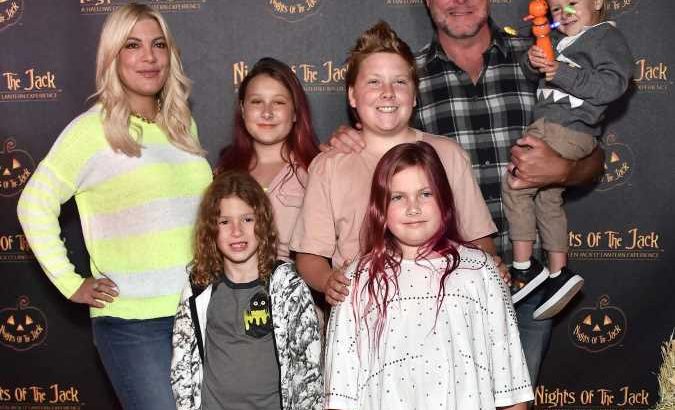 As a mother of five, Tori Spelling has fielded her fair share of mom-shaming comments, but she’s not sweating it.

The actress and husband Dean McDermott took their children along for the Nights of the Jack Friends and Family VIP Preview Night on Wednesday in Calabasas, California, where she opened up about a recent L.O.L. Surprise! event where she let her daughters Hattie Margaret, 8 this month, and Stella Doreen, 11, color their hair.

When asked about the criticism she received on social media, the 46-year-old star shrugged it off, telling reporters, “First of all, it was [for] Halloween costumes, in pink, and it washes out the next day. It wasn’t dye at all.”

“It was like, come dressed as your favorite L.O.L.,” Spelling explained. “It was a costume dress party where girls can be anything they want to be. Screw the shamers.”

The mother of five shared photos from the event that she attended earlier this week alongside McDermott, 52, Hattie, Stella and 2½-year-old son Beau Dean, where her daughters rocked colorful clothes, makeup and pink hair.

While most comments were supportive and complimentary, some users focused on the girls’ looks — like one user who remarked, “What is with all the makeup and dying those girls hair? Too young for that Tori!”

Spelling said that figuring out a family costume for Halloween is “really hard with five kids” who are of “varying ages.” (She and McDermott also share sons Finn Davey, 7, and Liam Aaron, 12.)

“The 2-year-old, I can get away with still putting on him what I want and making him [be part of] a family costume,” she said. “But they range up to 12, and they have different ideas of what they want to do for Halloween.”

“I did convince them — since we have two things to go to, one before Halloween, [to] do a family costume for that, and then [for] Halloween they can do whatever they want,” shared the BH90210 star.

With a household of seven, Spelling says she and McDermott (who’s also dad to 20-year-old son Jack) feel “complete” as a family — but never say never.

“I feel so blessed with the five I have I wouldn’t think to chance it, and we’re happy and our family is complete so probably no,” she said when asked if they would have more kids.

“I don’t ever like to say ‘never’ because I believe what’s meant to be is meant to be,” Spelling added.