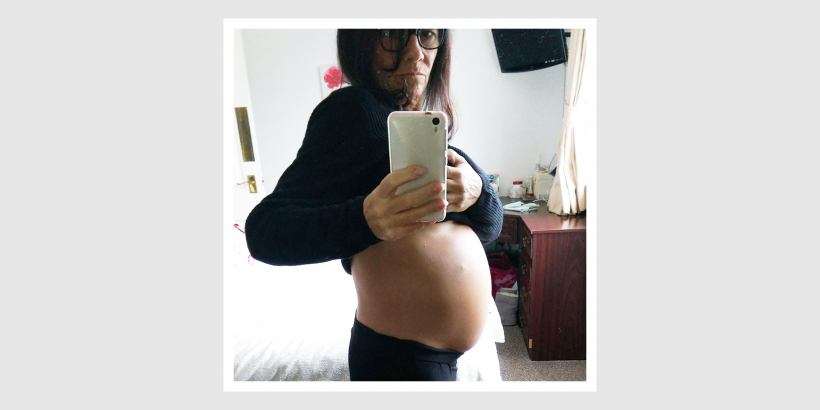 After what appeared to be the looks of a growing baby bump, Josephine Clinton decided to take a pregnancy test at the urging of her friends. But what they thought might be a “miracle baby” ended up being two massive ovarian tumors.

“This belly just came out of nowhere in a matter of weeks really,” according to Fox News. “I had been doing a bootcamp for quite a while but I wasn’t losing this belly. No matter how much exercise I was doing this belly wouldn’t go.”

Knowing something was off, Clinton sought answers, but doctors struggled to diagnose her as her symptoms were similar to that of IBS.

Four days later, at the urging of her friends, she agreed to take a pregnancy test. Clinton, who had struggled with infertility and been through IVF, already knew what the outcome would be.

“Of course it came back negative, and then they were like ‘Oh we’re really sorry, we shouldn’t have made you do it’,” she said. “I think they thought that they were getting my hopes up by thinking I might be pregnant.”

But that prompted her to stop at a local emergency room, just four days after going to her doctor. “They took me in for a scan straight away and then took me into a room and told me that there was a mass in my pelvic area,” Clinton recalls. “I had bilateral borderline ovarian tumors – one was the size of an apple and the other the size of a grapefruit.”

According to the Cancer Research Organization, borderline ovarian tumors are abnormal cells that form in the tissue covering the ovary. They are not cancerous and are usually cured with surgery.

Two months later, Clinton had a full hysterectomy. “The doctor said I was lucky I took myself into the hospital that day because if I had left it any longer, it would have been a totally different story.”

In retrospect, Clinton believes her story is a great lesson for other women about listening to your body and speaking up about your symptoms. “You don’t put two and two together,” she says. “There are a lot of the same symptoms as irritable bowel where you do have your back ache and feel bloated and stop going to the toilet.”

Symptoms for borderline ovarian tumors typically include a swollen abdomen, pain or a feeling of pressure, pain during or after sex, and vaginal bleeding not related to your period. But it’s important to remember that you may not experience all related symptoms. “They always say that you’re supposed to have symptoms, like painful sex or bleeding, and I had nothing like that,” Clinton says.

Thankfully, Clinton has been given a clear bill of health, and will just need to stop in for check-ups every six months to make sure the tumors do not return.