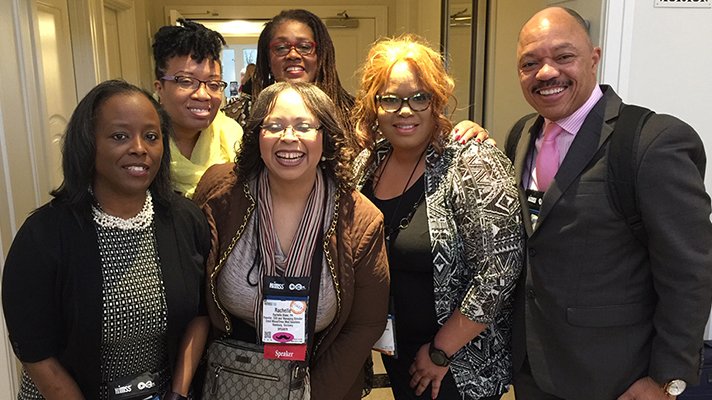 When Optum director of Advisory Services Iris P. Frye went to her first global HIMSS conference more than five years ago, what struck her was that out of the sheer volume of people attending, few were African-American.

“The first time I attended, I was basically shocked,” Siarri said. “I didn’t understand why I didn’t see professionals who looked like me. It didn’t sit right with me. When I came back the next year, I noticed it again.”

Women remain a rarity in the healthcare IT industry. African-American women, and men, are rarer still.

Frye and Siarri likened it to finding other unicorns in the crowd.

That was the start of the formation of the HIMSS’s African-American Special Interest Group around 2014.  The founding co-chairs are Frye and Rachelle Blake, president and CEO of Omnimicro.

“We both had been wanting to get something like this going for some time,” Blake said. “We wanted to make sure it was about representing diversity in the industry as a whole in health technology, and really within HIMSS.”

They got 25 signatures to start the committee and since then, said Blake, have been growing by leaps and bounds, so that membership is now measured in the hundreds.

It now includes men and women from around the world.

African-American SIG member Ty Faulkner, a professor of health technology, promotes the process of moving from paper to digital.

“Like me, they had a shared interest to improve the status of minorities in health IT,” Faulkner said. “My goal is how to eliminate the digital divide.”

Blake has been living in Hamburg, Germany for five or six years and has made connections across Europe.

“From my perspective, we’ve seen some major steps,” she said. “Like man going to the moon, we’ve seen small steps. We need to see leaps.”

Siarri travels in her job with InnoNurseand and in her role as a social media ambassador for HIMSS, first in Europe and now in the United States. She has found people warm and welcoming everywhere, from Barcelona to Malta and Finland, she said.

She and Frye met during a pre-conference workshop on the HIMSS Tiger Committee – Technology Informatics Guiding Education Reform.

The African-American SIG meets monthly, but members are in touch through Slack and other social media channels.

They impart information and answer questions on what’s going on at HIMSS and within healthcare IT.

“It’s bringing our unicorns together that are all over the world,” Siarri said

Each take his or her experiences and efforts for greater diversity to their  workplaces.

“I’m passionate about seeing representation,” Matthews said. “You go about your daily work, sometimes with your head down and sometimes you notice, you’re one of the few African-Americans in IT or health IT. As I’ve gotten higher and higher in the organization, there’s no other people who look like me.”

She does see movement, which is important now and for future healthcare technology professionals.

Matthews’ 14-year old son is interested in IT and STEM and went with her to a HIMSS global conference when he was 13. One of the goals of the committee is to interact with students and educate them about health IT.

The move towards more diversity is heading in the right direction, Matthews said, though more needs to be done.

“I do see some movement,” she said. “In general I see more women in leadership. In IT, I still think it’s a male-dominated field. The women at the table have to be at the top of their game.”

Siarri, who has been named a Most Influential Women in Health IT said she’d like to see in HIMSS more women of color in executive positions. That would be a good representation of how the industry is going.

Frye said she recently spoke to HIMSS leadership about the next steps for the group. The volunteer committee would like to become an officially recognized part of HIMSS.

“We have solidified our presence in HIMSS,” Frye said. “Our next step is how we can do that by getting the support of the leadership at HIMSS. We plan on working on that for 2019.”