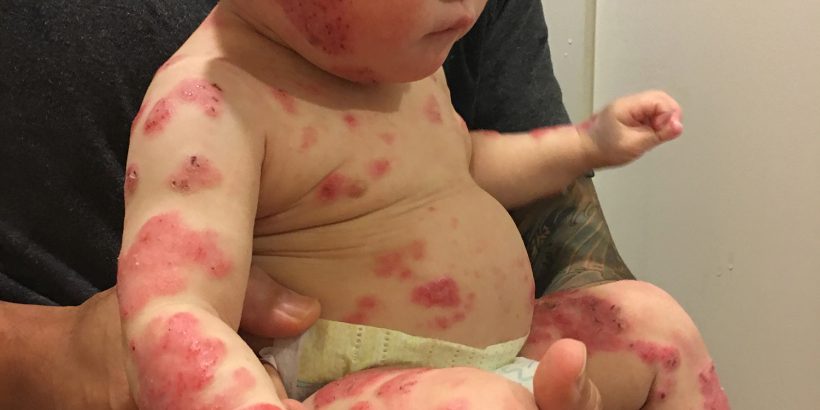 When Kristi Chun’s 1-1/2-month-old son, Colby, showed signs of eczema on his ear, she picked up a bottle of over-the-counter anti-itch cream, not realizing she was starting her family on a years-long journey of doctors’ visits and sleepless nights.

The hydrocortisone was effective practically overnight, the mom of one recalls to PEOPLE, but when it returned the next time on his mouth, as well, she and her husband took Colby to a doctor. Within a week of the first signs of eczema, the Chuns’ pediatrician prescribed them a steroid cream.

Initially, Chun recalls, the doctor told her that they don’t usually “jump to steroids,” but she still received the prescription in a “casual conversation.”

“There was no discussion or patient counseling about dangers of using it, potential side effects, how long you should use it for, anything like that,” the mom tells PEOPLE.

RELATED: Mom Speaks Out After Her Baby Almost Dies of Herpes from a Stranger Kissing Her on the Lips

The prescription, Triamcinolone, worked successfully for a few weeks until the skin rashes came back on Colby’s face and neck crease. Because it was “oozy” more than it had been in the past, Chun asked her doctor if it could be a yeast infection. The doctor’s response? A prescription anti-fungal cream, Nystatin, Chun says — which no one told her also contained steroids.

Once again, the mom applied a thin layer on Colby’s skin and it disappeared almost overnight. When it came back, though, it was in his leg and arm creases, too. The solution was more steroid cream, the doctor told her, Chun recalls, adding that all the while, she was trying to eliminate any potential causes of Colby’s flare-ups from her home.

“I was breastfeeding, so I was on an elimination diet,” she says. “We were changing detergents, doing everything possible to try and find the cause of eczema.”

Then, after four weeks of using the creams, Colby, about 2 months old at the time, woke up at 3 a.m. “screaming. His body was dripping and oozing, and he just would not go back to sleep,” Chun says.

So she scheduled an emergency doctor’s appointment, and the practitioner recommended three days of oral steroids. Concerned about the other doc’s previous statement about steroids not usually being the first line of defense, Chun consulted with a doctor friend about the three-day treatment. She recalls that he said it was fine because the dosage would only last briefly.

One day of the pills later, Colby was fine again, but days later came another whole-body flare-up. The Chuns then sought a dermatologist, who prescribed, again, more steroid cream.

“She was very casual in the way she prescribed it. She gave us more of what we already had and a prescription oil for his scalp,” Chun continues, adding that they used it on his whole body, including his cradle cap.

The cycle of Colby recovering almost immediately and then suffering even worse rashes continued for six weeks. There were periods where he wouldn’t sleep for more than 45 minutes at a time. All the while, the Chuns regularly brought their son to the dermatologist.

RELATED: Baby Left in Swing for Days Was Covered in Maggots and Died of ‘Diaper Rash’ — as Dad Is Sentenced

“Every time we’d bring him back, they’d say, ‘Okay, put more [steroid cream]. Put it on his torso, his legs,’ ” Chun says. “We’d ask about natural solutions, and she’d say, ‘We’d prefer not to because natural doesn’t mean it’s good or that he wouldn’t have an allergic reaction.’ “

In Chun’s desperate search to find anything that would provide her infant some relief, she discovered wet raps. The treatment calls for a layer of emollient directly on the skin, a wet layer of fabric, then a dry layer of fabric — and a conversation with a doctor if it’s used in conjunction with steroids. Chun says the doctor told her to apply the steroids before the emollient and then proceed with the product’s instructions.

“He’s this tiny little thing, and he would scream like he was being tortured,” when the mom applied the wet wraps, she says. “I thought I was doing the right thing.”

After two weeks of the wet wraps — and a lot of searching online for support for her son’s condition — Chun discovered the condition topical steroid withdrawal, also known as TSW.

“I saw there was a pattern,” she says. “It got to a point where I could predict when the eczema would come back. At that point, I realized that he was reacting to the steroids and I’d have to take him off them.”

Although Chun was confident in her assessment with what was wrong with her son, doctors “did not support” her and said to keep Colby on the drugs.

But they did stop using the steroids, and “It got even worse,” she recalls. “His whole body was swollen, his feet looked like balloons, his legs were huge, and his skin was very week. He would bleed so easily.”

Finally, though, after six to eight months of trying natural alternatives to steroids, from coconut oil, to wheat grass cream and organic honey, Colby smiled for the first time Chun could ever remember.

“Only within the past couple weeks has he been able to take a normal bath without screaming,” she explains. “He’s able to enjoy life for the most part.”

Based on her research — she’s relied heavily on the International Topical Steroid Addiction Network for information — Chun expects Colby to be fully recovered by the time he turns 3.

For parents whose sons and daughters are struggling with eczema — about 13 percent of kids do — Chun recommends always getting a second medical opinion about how to treat the condition.

Chun also advises always checking the FDA warning label before giving a child any prescription or over-the-counter drugs, even if they’re handed over totally casually.