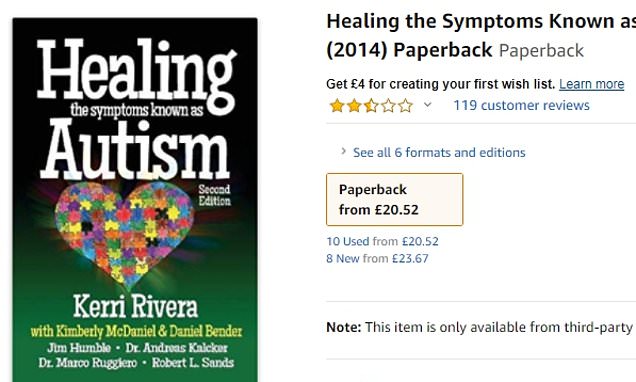 Amazon is selling books encouraging parents to feed their children toxic chemicals to cure their autism, it has been revealed.

The books claim autism – an incurable, congenital disorder – can be treated by drinking potentially toxic chemicals.

And among other touted cures for the condition are camel milk, electroconvulsive therapy, veganism, yoga and sex, an investigation by Wired has found.

In the book ‘Healing the symptoms known as autism’ parents are instructed on how to make chlorine dioxide, a type of industrial bleach, Wired reported

Books being sold on the subject include ‘Healing the Symptoms Known as Autism’ and ‘Fight Autism and Win’.

In ‘Healing the Symptoms’, the authors reportedly tell the reader how to make chlorine dioxide, a solution sometimes called Miracle Mineral Solution (MMS).

MMS is claimed to have health benefits but none are proven and it is, in reality, is a disinfectant unfit for human consumption.

Chlorine dioxide is used to disinfect drinking water, to clean electronic circuit boards and to bleach paper and fabrics.

The US’s Food and Drug Administration in 2010 specifically warned people not to drink MMS, which it called ‘an industrial bleach that can cause serious harm to health’.

CAN AUTISM BE CURED?

Autism is a life-long condition which children are born with and it cannot be cured.

Around one per cent of people in the UK have autism, and different people are affected by it in different ways and to varying levels of severity.

The condition is more common among boys and men than it is in females.

Although symptoms very between people, typical signs of autism include difficulty with social interactions, rigid and sometimes obsessive habits and interests, or sensitivity to some lights and sounds.

The exact cause of autism is unknown, but it is believed to be triggered by genetic factors.

There were once claims the MMR vaccine could cause the condition but these have been proven to be completely false.

Treating someone with autism involves managing symptoms and helping them to feel comfortable in their day-to-day life, but this varies widely depending on people’s individual conditions.

The FDA said anybody who had any MMS – which is wrongly claimed to be able to treat acne, cancer, flu, HIV and hepatitis – should throw it away immediately.

‘High oral doses of this bleach, such as those recommended in the labeling, can cause nausea, vomiting, diarrhea, and symptoms of severe dehydration.’

In its ‘Customers who viewed this item also viewed’ section beneath the listing for ‘Healing the Symptoms’, Amazon recommends chlorine dioxide water purifying drops.

Wired even invented a fake e-book to sell on Amazon and, despite it being seven pages copied from a Wikipedia entry, it was accepted within two hours.

The fake book was titled ‘How To Cure Autism: A guide to using chlorine dioxide to cure autism’ and Amazon allegedly suggested it use the keywords ‘autism cure’ to market the book.

Wired removed the book as soon as the advertising campaign was approved, and confirmed it didn’t sell any copies.

‘No responsible retailer should be giving a platform to people who promote dangerous products to vulnerable families,’ said Jane Harris, director of external affairs at the National Autistic Society.

‘We must do everything we can to protect people from charlatans and quacks.’

The book ‘Fight Autism and Win’, Wired said, instructs parents to give their children a medicine called DMSA, which is used to treat lead poisoning.

The FDA has also told people not to administer this themselves after a five-year-old autistic boy died when he was given it in 2005.

‘Fight Autism and Win’ suggests children be given a solution every four hours for three days once a week.

The two books named in this article were available to buy online in the UK and US earlier today – Amazon has since removed ‘Fight Autism and Win’.

WHAT IS MIRACLE MINERAL SOLUTION? THE DEADLY BLEACH PEDDLED TO PARENTS TO ‘CURE’ AUTISM, CANCER AND MALARIA

Government health watchdogs issued an urgent warning about miracle mineral solution (MMS), which has since sold thousands of bottles worldwide, in 2010.

A deluge of serious complaints forced the Food Standards Agency to urge people who bought the drink to throw it away.

Those who had tried it suffered agonising bouts of nausea and diarrhoea after taking just a few drops of the fluid.

It was reported at the time that MMS contains 28 per cent sodium chlorite solution – the equivalent to industrial strength bleach.

The FSA warned at the time that this was six times the amount that can be found in a bottle of Domestos bleach.

Its makers claim it can cure cancer, malaria and even autism – but no scientific evidence exists.

Bottles of the liquid cost in the region of £30 ($42) and it must be mixed with citric acid to produce chlorine dioxide. In large doses it could prove fatal.

It is reportedly stocked in some shops, but can be bought online.