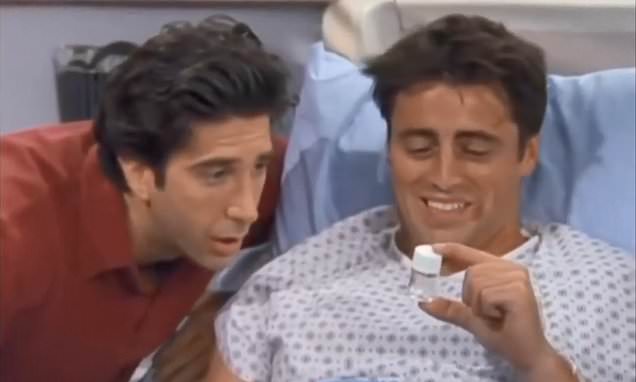 New drug combination could end agony of kidney stones by relaxing the body, allowing hard deposits to pass out smoothly

A new drug combination could end the agony of kidney stones by relaxing the body, to allow the painful lumps to pass more smoothly.

For most of the 500,000 Americans a year who develop kidney stones, the standard treatment plan is to take painkillers and wait for the stones to pass through the urethra, which can be extremely painful and takes up to 10 days.

However, researchers at the Massachusetts Institute of Technology have discovered a two-drug combination that can relax the ureter, which connects the kidneys to the bladder, allowing the stones more space to pass.

The treatment, which was effective in animal models, would be the first new treatment for kidney stone patients in 40 years – a possible game changer as rates keep rising year-on-year. 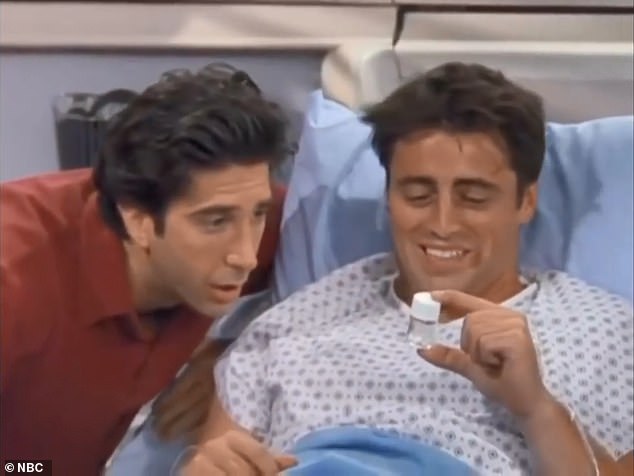 Kidney stones are so notoriously painful they provided an entire storyline for the hit show Friends (pictured: Joey and Ross admiring the tiny crystals that inflicted so much agony)

‘We think this could significantly impact kidney stone disease, which affects millions of people,’ says Michael Cima, a professor of materials science and engineering at MIT, and a senior author of the study.

Kidney stones are made from hard crystals that accumulate in the kidneys when there is too much solid waste in the urine and not enough liquid to wash it out.

While surgery is recommended for larger stones, those cases are rare, and most are prescribed painkillers to wait it out.

But it is becoming a bigger problem for doctors.

In the 1970s, less than one in four Americans suffered from the debilitating condition. Today, about one in 10 people will have a kidney stone at some point in their lives.

Rates are rising fastest in women and teenagers, which urologists say could be down to poorer, more sugar-laden diets, and the decline of physical activity.

Most of the pain from passing a kidney stone stems from inflammation in the ureter as the stones pass through the narrow tube.

Some doctors prescribe an oral medication that is designed to relax the ureter, but there is limited evidence it works effectively, and it is not FDA-approved.

Dr Cima, his PhD student Christopher Lee, and Dr Brian Eisner, co-director of the Kidney Stone Program at Massachusetts General Hospital, set about designing a muscle relaxant that can be delivered directly to the ureter.

‘If you look at how kidney stones are treated today, it hasn’t really changed since about 1980, and there’s a pretty substantial amount of evidence that the drugs given don’t work very well,’ Lee said.

‘The volume of how many people this could potentially help is really exciting.’

The team identified 18 drugs used for high blood pressure, glaucoma and other inflammatory conditions, and injected them into nearly 1 billion human ureteral cells in a Petri dish.

After analyzing the effect themselves, they used intensive computational processing to precisely measure the ‘relaxation responses’ of the cells.

They found that, after administering the drugs direct to the ureter using a catheter-like instrument, the pigs had barely any ureteral contractions.

What’s more, they did not detect the drugs in the pigs’ bloodstream, suggesting the drugs stayed localized in the ureter, decreasing the risks of side effects.

The researchers are now launching a startup company, Fluidity Medicine, to develop this idea further and get towards a point where they can test it on human patients.