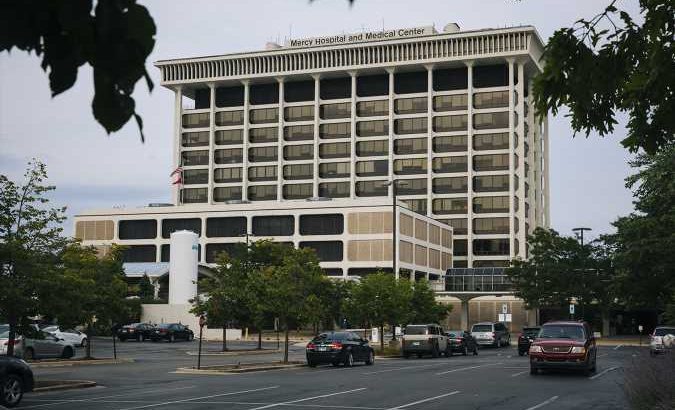 Illinois and Chicago officials are trying to figure out how to stop a private company from closing a money-losing urban hospital in a poor, underserved Chicago neighborhood.

Trinity Health, a national Catholic tax-exempt chain, wants to close Mercy Hospital and Medical Center on Chicago’s Near South Side by May 31. Last month, in an unusual move, the Illinois Health Facilities & Services Review Board unanimously denied Trinity permission to close the 412-bed facility, which predominantly serves Black and other minority patients on Medicaid.

The board members said they feared the closure would limit access to care for nearly 60,000 South Side residents, forcing them to travel nearly 7 miles to the closest facility with an emergency room, intensive care unit and birthing center. It also would cost the community about 2,000 hospital jobs.

So far, no one has come up with a politically and financially viable solution for strengthening safety-net health providers in low-income urban communities. “The sad fact is market location is everything,” said Lawton Robert Burns, a professor of health care management at the University of Pennsylvania, who studied the controversial closure of Hahnemann University Hospital in Philadelphia in 2019. “No offense to poor people, but there are economic factors that hospitals can’t control.”

But it is far from clear that a government board can stop a hospital from going out of business. “It’s really difficult in a capitalist country to tell a private company you have to continue to lose money,” said Dr. Linda Rae Murray, a member of the health facilities board and former Trinity Health board member who teaches health policy at the University of Illinois-Chicago.

Trinity, which operates 92 hospitals in 22 states, seems determined to push forward with its plans to close the hospital. It has deep pockets, with $31.9 billion in total assets. It reported revenue of $18.8 billion last year, and a profit of 2.3% in the most recent quarter. Trinity executives told the health facilities board in December that Mercy loses nearly $39 million a year and that they could not find any buyers for the hospital — Chicago’s oldest, chartered in 1852. They also reminded the board that state lawmakers rejected Mercy’s 2019 $1 billion proposal to merge with three other South Side hospitals and build a new hospital facility and several new clinics with $520 million in state aid.

Trinity declined to make anyone available for an interview for this article.

Trinity has said it will try again to get approval to shut Mercy at the facilities review board’s Jan. 26 meeting. It has offered to replace the hospital with a $13 million clinic offering just diagnostic and urgent care — but no primary care physician services. Critics of that proposal say the clinic, while helpful, would not be an adequate replacement for the hospital because it would not provide access to the full range of needed services.

“We can’t have these mega-hospital companies that are getting a property tax exemption for providing charity care closing a safety-net hospital in the middle of a pandemic,” said former Illinois Gov. Pat Quinn, a Democrat who spearheaded a 2013 deal to save Roseland Hospital, another embattled facility on Chicago’s South Side. “I’d tell the Trinity executives, ‘You’re not doing this to Chicago. We’ll work with you to put together a bigger deal.’”

The obvious long-term solution is richer Medicaid funding for safety-net hospitals, effective partnerships between public and private providers and firm commitments by financially strong hospital companies, including academic medical centers, to expand services in low-income communities. For instance, some say state and local officials should prod Trinity to use the resources of its Loyola University Medical Center in west suburban Chicago to bolster Mercy.

More from the Midwest

Hospitals are required to get a certificate of need for closure from the facilities review board, according to a new state law. But state officials’ actions are limited when seeking to enforce a decision to keep a facility open.

The state could levy a fine of up to $10,000 for not complying with the board’s decision, plus an additional $10,000 a month while the hospital continues to operate. But that’s a trivial amount for a big company like Trinity.

The state also could halt Medicaid and other public payments to Mercy. But that would be counterproductive, hastening the hospital’s demise since nearly half of Mercy’s inpatient revenue and 35% of its outpatient revenue comes from Medicaid, according to state data.

A final source of leverage is in Trinity’s ownership of three other hospitals in the Chicago area: Loyola, Gottlieb Memorial Hospital and MacNeal Hospital. The state could threaten Trinity’s property-tax exemption as a charitable organization. That’s an approach favored by Quinn, who cited a previous legal challenge to the tax-exempt status of the Carle Foundation Hospital in Urbana, Illinois.

No matter what the state does, Trinity can find ways to shut down Mercy. It could argue that even as Mercy is meeting the state requirement to continue to treat patients, it must close critical services like the emergency department or the birthing center because it lacks funding or staff to maintain adequate quality of care, said Juan Morado Jr., a Chicago health care lawyer who formerly served as general counsel for the facilities review board. The new law permits closing only one hospital department every six months.

While the state presses to keep the hospital open, Mercy also could suffer from attrition. When there’s talk of closing a hospital, physicians, nurses and other staffers may start leaving for other jobs. Whether Trinity seeks to refill positions is critical.

“There are things the owner can do to trickle the hospital down to nothing,” said Dr. David Ansell, senior vice president for community health equity at Rush University Medical Center in Chicago, who opposes shuttering Mercy. “There is a drip, drip, drip of negativity, and at some point people vote with their feet.”

The Chicago area has been through a similar battle recently. Pipeline Health, a private-equity investment firm, bought Westlake Hospital in suburban Melrose Park and two other local hospitals from hospital chain Tenet Healthcare in 2019. Pipeline quickly announced it was closing Westlake, a 230-bed hospital — even though it had promised the state it would keep it open for at least two years.

That controversial move prompted the Illinois legislature to give the facilities review board new authority to deny permission for future hospital closures, which the board lacked for Westlake.

Yet, the Westlake saga may point to a better solution for Mercy. In early 2020, the state and federal governments renovated the Westlake facility so it could be used as an overflow site for covid-19 patients. It wasn’t needed, but the updates led to strong interest from companies in purchasing and reopening the hospital, particularly for behavioral health inpatient services.

State Rep. Kathleen Willis, a Democrat who co-sponsored the 2019 bill to let the facilities review board say no to hospital closures, said a deal to buy and reopen Westlake likely will be announced within the next few weeks.

Any deal to save Mercy likely will require more money from Trinity, more commitment from other providers to offer a full range of hospital and medical services in the area, and significant increases in state and federal funding.

“Every hospital CEO has to worry about the bottom line of their business,” Ansell said. “But big organizations like Trinity need to come up with a better solution than the wholesale shutdown of an anchor institution that will leave communities bereft.”