Other studies have examined the way that exercise affects the microbiome, but this study is one of few to examine the reverse—how gut bacteria also impact voluntary exercise behaviors. Voluntary exercise involves both motivation and athletic ability.

The researchers’ methods and results are now detailed in the journal Behavioural Processes.

“We believed an animal’s collection of gut bacteria, its microbiome, would affect digestive processes and muscle function, as well as motivation for various behaviors, including exercise,” said Theodore Garland, UCR evolutionary physiologist in whose lab the research was conducted. “Our study reinforces this belief.”

Researchers confirmed through fecal samples that after 10 days of antibiotics, gut bacteria were reduced in two groups of mice: some bred for high levels of running, and some that were not.

Neither group of mice exhibited any signs of sickness behavior from the antibiotic treatment. So, when wheel running in the athletic mice was reduced by 21 percent, researchers were certain the microbiome damage was responsible. In addition, the high runner mice did not recover their running behavior even 12 days after the antibiotic treatment stopped.

The behavior of the normal mice was not significantly affected either during the treatment, or afterward. 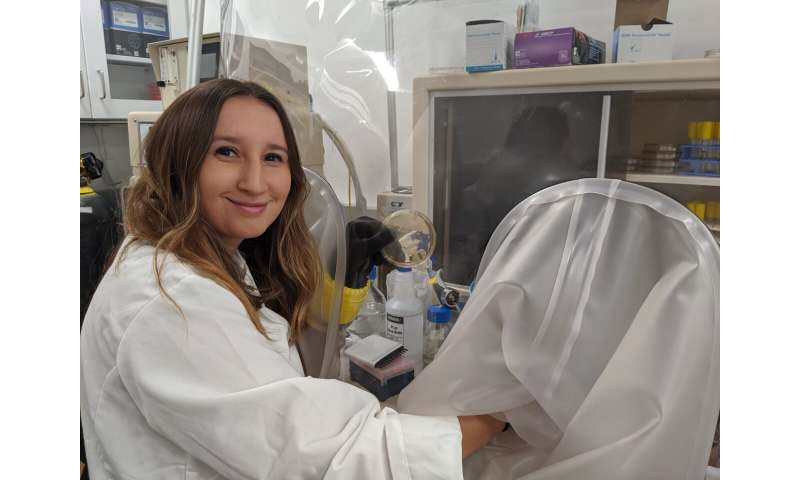 “A casual exerciser with a minor injury wouldn’t be affected much. But on a world-class athlete, a small setback can be much more magnified,” said Monica McNamara, UCR evolutionary biology doctoral student and the paper’s first author. “That’s why we wanted to compare the two types of mice.” Knocking out the normal gut microbiome might be compared with an injury.

One way the microbiome might affect exercise in mice or in humans is through its ability to transform carbohydrates into chemicals that travel through the body and affect muscle performance.

Moving forward, the researchers would like to identify the specific bacteria responsible for increased athletic performance. “If we can pinpoint the right microbes, there exists the possibility of using them as a therapeutic to help average people exercise more,” Garland said.

A lack of exercise is known to be a major risk factor for aspects of mental health, including depression, as well as physical health, including metabolic syndrome, diabetes, obesity, cardiovascular disease, cancer, and osteoporosis. Many in the public health community would like to promote exercise, but few have found ways to do it successfully.

“Though we are studying mice, their physiology is very similar to humans. The more we learn from them, the better our chances of improving our own health,” Garland said.

Certain foods may also increase desirable gut bacteria. While research into “probiotics” is developing, Garland recommends that those interested in promoting overall health maintain a balanced diet in addition to regular exercise.