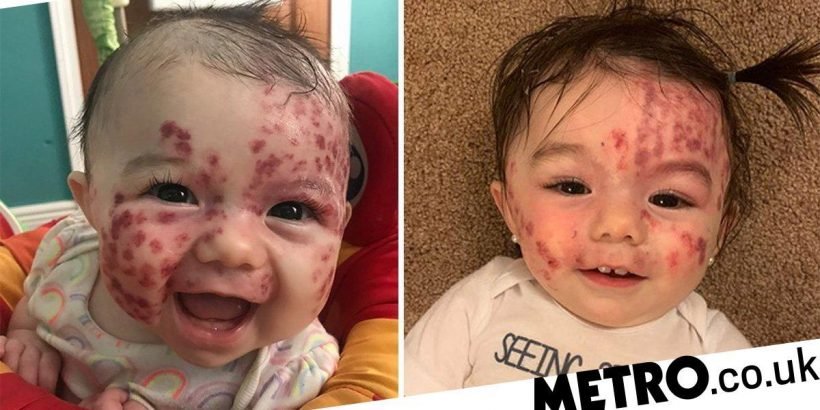 Deanna wants to see the marks on Bianca’s face as something beautiful, calling her daughter a ‘polka dot cutie’.

Deanna, a student nurse practitioner, said: ‘If we didn’t treat the birthmark, it would continue to grow into an extreme cause and could cause a facial deformity, harden-up and become darker in colour.

‘It always looks worse after treatment, it looks like little burn marks and we have to keep it moist with Vaseline while it heals for two weeks.

‘Many times, I’ve been to the grocery store, people have asked if she’s having an allergic reaction or fearing that she has measles because I’m an ‘anti-vaccinator’.

‘Mothers turn away and keep their children away from us, other times we have had comments asking if she was burned.

‘The worst is when people give stares asking if I’m a good mother and if I hurt my child, that has been very difficult to deal with.

‘I don’t blame people for being curious, I want people to ask and educate them so they are less ignorant and more understanding.

‘We call her our ‘polka dot cutie’, I view her as adorable and to me the polka dots represent how strong she is.’

There is no cure for Bianca’s port wine stain or Sturge-Weber Syndrome, so the child will need treatment for the rest of her life. Her treatments are helping to reduce the appearance of her birthmark, however.

Deanna said: ‘One day I thought about putting on makeup to mimic her birthmark and go to a store to see how people would react so i could put myself in her shoes in the future.

‘But I couldn’t do it, I don’t like to be stared at and I didn’t want her to be teased or stand out because of that.

‘But mainly our reasoning was because we didn’t want it to continuously grow, it’s so unpredictable and can be very aggressive, we don’t know what will happen.

‘There are concerns that the seizures could return or it could calcify in her brain, acting like a brain tumour.

‘Bianca’s birthmark has changed significantly through the lightening of laser treatment, she barely looks like she has a port wine stain on her face.

‘The results are great, I recommend to any new parent questioning if their child should go through it, it’s amazing to see the before and after results.’