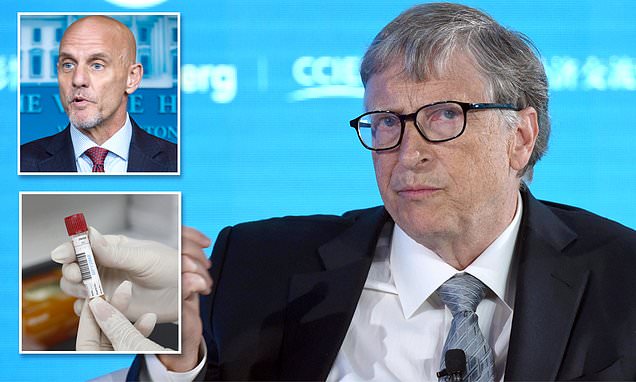 Bill Gates no longer trusts US regulators – and questions whether the Food and Drug Administration’s eventual approval of a coronavirus vaccine will mean the shot is safe.

‘The FDA lost a lot of credibility,’ the billionaire philanthropist told Bloomberg Television, referring to the agency’s series of prematurely positive outlook on various COVID-19 treatments, and subsequent retractions.

Confidence in a vaccine from the long-time investor in public health initiatives could help to encourage Americans to get the shot that is likely the world’s best hope to combat the pandemic.

But right now, Gates has little confidence that the FDA will sufficiently vet vaccines, and his skepticism is mirrored in the American public.

Meanwhile, Gates’s own foundation published a report on Monday finding that the pandemic has wiped out 25 years of progress on global vaccine initiatives in just 25 weeks. 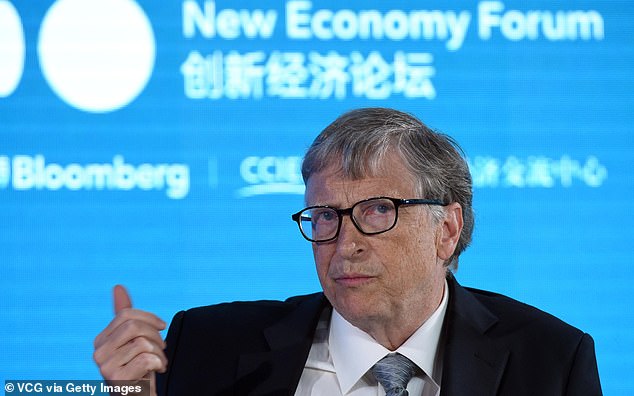 When asked if he still trusts the FDA after its ‘bungled’ and overly-optimistic statements and decisions about COVID-19 treatments, he cited ‘cracks’ in what it has said during an interview with Bloomberg Television. He said he was relieved companies promised not to cut corners

The coronavirus crisis has forced health agencies in every nation to pivot their focus to the developing treatments, vaccines and guidelines to slow the spread of the deadly infection.

With the help of governmental agencies, drug companies have set to work testing therapeutics and developing vaccines with unprecedented speed.

The public and political eye has shifted onto health agencies in unprecedented ways too, and the they’ve buckled under the pressure, at least in Gates’s view.

‘Historically, just like the CDC was viewed as the best in the world, the FDA had that same reputation as a top-notch regulator,’ Gates said.

‘But there’s been some cracks with some of the things they’ve said at the commissioner level.’

After the FDA issued emergency use authorization for the use of plasma donated by COVID-19 survivors in August, Commissioner Dr Stephen Hahn cited an off-the-cuff statistic that plasma would save 35 percent of patients treated with it.

That figure was drawn from an unpublished observational study, and did not compare patients treated with plasma to those who got a placebo. 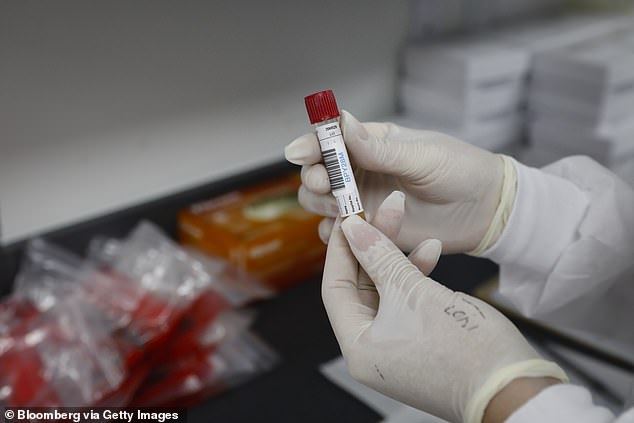 President Trump has hinted that he hopes a coronavirus vaccine could be ready before the November 3 election, but health experts are concerned about the safety of potential shots amid this sort or political pressure (file) 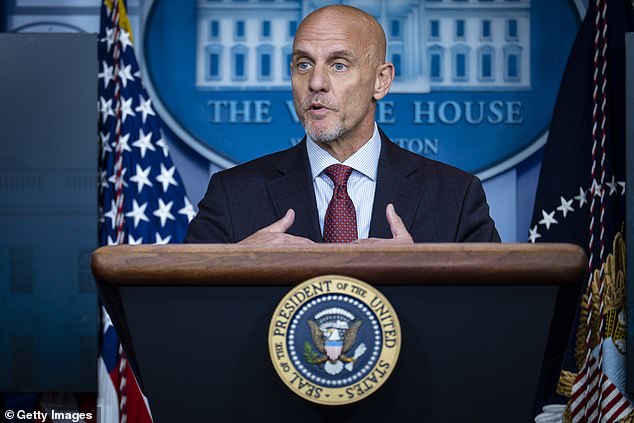 FDA Commissioner Dr Stephen Hahn said after the agency’s August approval of convalescent plasma to treat COVID-19 that it saved the lives of 35% of patients treated it. The stat came from an unpublished study and Dr Hahn’s statement drew wide criticism, including that his optimism was politically motivated

Dr Hahn was panned for he comment, made from the White House, and issued an apology via Twitter, calling criticism of him warranted.

In fact, scientists from another governmental agency, the National Institutes of Health (NIH), said it should not have been approved, and hospitals refused to start using the treatment. Many believed the FDA has simply caved to pressure from the Trump administration.

The coronavirus pandemic has triggered a seven percent rise in poverty around the world – and could unravel years of progress against global health issues, according to a new report from the Bill and Melinda Gates Foundation.

‘We saw with the completely bungled plasma statements that when you start pressuring people to say optimistic things, they go completely off the rails,’ Gates told Bloomberg. 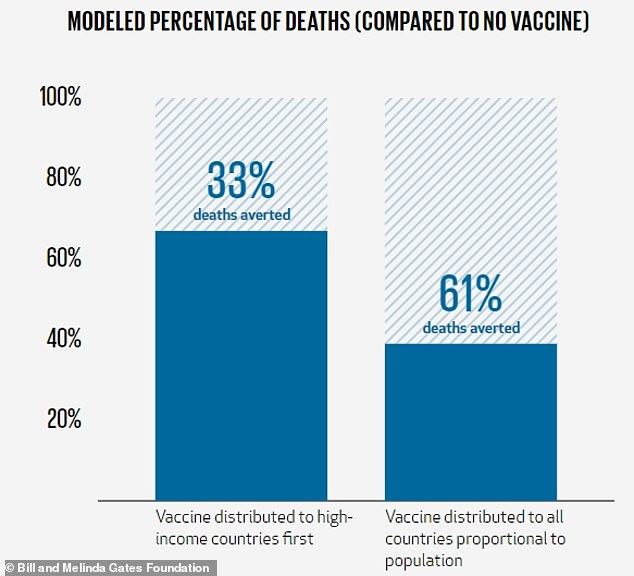 The Gates Foundation Goalkeeper report found that economic turmoil has wiped out 25 years of progress on global vaccination, but found that ensuring all nations get a COVID-19 vaccine could prevent 61% of deaths – nearly twice as many as would be avoided if only high-income countries get the shot

‘The FDA lost a lot of credibility there.’

And as Trump teases the possibility of a coronavirus vaccine being approved before the November 3 election, the FDA is facing skepticism of its trustworthiness to make sure that a vaccine only gets approval if it is indeed safe.

In recent weeks, about half of Americans have said they’re not planning on getting a coronavirus vaccine when one does become available in regularly conducted polls.

Some have even said they are less likely to trust a shot if the president endorses it.

Gates did not specify whether or not he plans to get a coronavirus vaccine.

But historically, the philanthropist is by no-means an anti-vaxxer.

Once there is a coronavirus vaccine, the Bill and Melinda Gates Foundation has promised to help ensure that people in poorer countries have access to it. 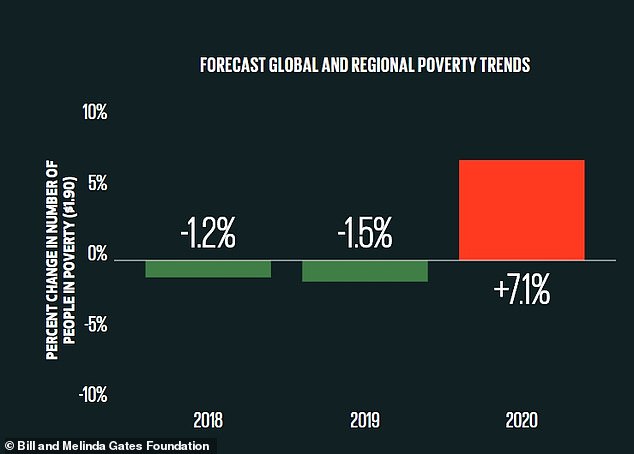 The foundation has already pledged billions of dollars to global initiatives to provide vaccines to children around the world, especially in poor countries, to protect them from infectious diseases.

Much of their work has been undone by the pandemi, however.

The Gates Foundation’s annual Goalkeeper report claims that the world has lost about 25 years of progress on global vaccination in the span of 25 weeks of the pandemic.

According to the report, released Monday, the loss of more than 929,000 lives to coronavirus worldwide is only the beginning of the pandemic’s toll.

Financial turmoil has triggered a seven percent rise in worldwide poverty, and money and efforts that were spent on ensuring that children around the globe got vaccinated against all manner of fatal diseases have been siphoned off to fight the pandemic.