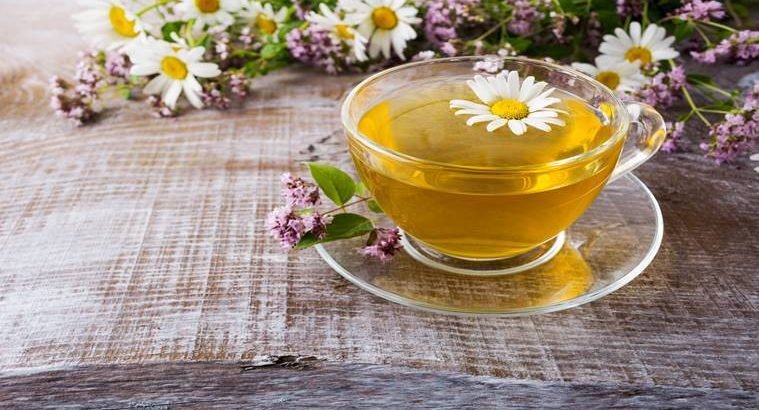 Chamomile tea is rich in flavonoids which possess antioxidant and anti-microbial properties that are good for health.

As a caffeine-free infusion, chamomile or ‘babune ka phal‘ has been used as a natural remedy for many ailments since time immemorial and has been considered a better alternative to regular tea. A centuries old herb, chamomile comes from daisy-like flowers of the Asteraceae plant family. It offers a number of health benefits as its laden with antioxidants. Though some studies suggest consumption of chamomile infusion may help lower the risk of diseases like heart disease and cancer and even control blood sugar, definitive studies are yet to be carried out.

While chamomile has two varieties, Roman and German, most of the chamomile tea produced around the world is prepared from leaves of the German variety. A single cup of brewed chamomile tea is said to contain around two calories, and 0.5 grams of carbohydrates.

It also has traces of magnesium, calcium, fluoride, potassium, folate and Vitamin A and is rich in flavonoids which possess antioxidant and anti-microbial properties.

Can’t fall asleep on a regular basis? Insomnia, or chronic inability to sleep, is a common problem today and is responsible for causing various other health problems. Consuming chamomile infusion can help relax and soothe your nerves and help you sleep soundly. Being caffeine-free, it is an ideal beverage to sip before going to bed. It is known to contain apigenin, an antioxidant that binds to certain receptors in your brain and may induce sleep.

PMSing is a serious concern among many. Chamomile infusion is known to have pain-relieving as well as antispasmodic properties which helps in the reduced production of prostaglandins (hormone-like substances) which cause inflammation and pain according to a study published in the Journal of Agriculture and Chemistry. As a result, it relaxes the uterus.

Chamomile infusion has the ability to fight harmful bacteria, thereby, helping boost immunity. Also, it is known to treat cold and sore throat. Due to the presence of antioxidants, it acts as a defense against inflammation.

A gentle relaxant, chamomile infusion helps calm down nerves and works as an effective natural sedative. Due to its soothing and calming effect on the body, drinking chamomile tea on a daily basis is said to reduce anxiety drastically.

Good for the skin

Consuming chamomile infusion also helps in eliminating acne scars. One can also apply chamomile topically on the skin. It can be used as a natural bleach and to reduce tanning and sunburn for it is blessed with anti-inflammatory and antiseptic properties. Let brewed tea cool down at room temperature and then with the help of a towel, apply it on the sunburned area.

To make chamomile tea, steep a chamomile tea bag or chamomile flowers in hot water for 5 to 10 minutes in a mug covered with a saucer. Once, its cooled down, sip the infusion slowly.

It is advised that pregnant women should only use chamomile under their doctor’s directions since chamomile is said to have uterine stimulating properties which may induce pre-term labour and other complications, Also, those allergic to daisies or dandelions should ideally stay away.