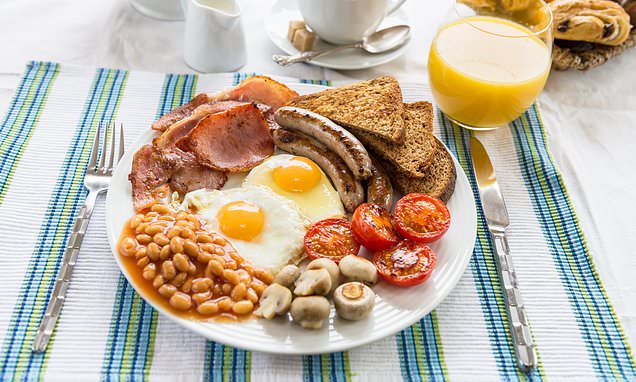 Breakfast is NOT the most important meal of the day: Study finds no evidence eating in the morning boosts weight loss

People trying to lose weight should skip breakfast, according to new research.

Previous studies have suggested that eating a big meal in the morning curbs our appetite throughout the day, helping dieters slim down.

But a review, published in The BMJ, suggests ‘the most important meal of the day’ may not help people to control their weight. 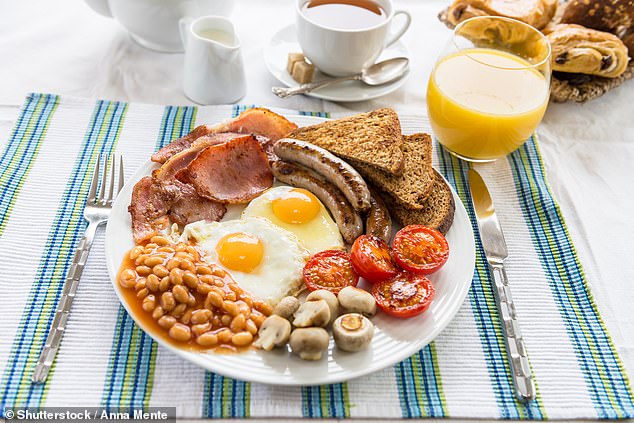 Breakfast is not the most important meal of the day, research suggests (stock)

Researchers found there is no good evidence to support the idea that eating breakfast promotes weight loss – or that skipping breakfast leads to weight gain.

In fact, the findings show that daily calorie intake was higher in people eating breakfast and that skipping brekkie does not cause greater appetite later in the day.

The researchers said their review questions the popular recommendation that eating breakfast can help with weight control.

Previous studies have suggested that eating breakfast is linked with maintaining a healthy weight.

But the researchers said those findings were observational and possibly reflected an individual’s wider healthy lifestyle and food choices.

The team from Monash University in Melbourne, Australia, analysed the effect of regularly eating breakfast on weight change and daily energy intake, based on evidence from 13 studies, mainly in Britain and the United States, from the last 28 years.

WHAT SIZE BREAKFAST, LUNCH AND DINNER IS BEST FOR WEIGHT LOSS?

A blow out breakfast, ‘average’ lunch and small dinner may be the best combination for those suffering from diabetes or obesity, research suggested in March 2018.

Sticking to just three meals a day of varying sizes also reduces diabetics’ glucose levels and insulin requirements, as well as their hunger and carbohydrate cravings, the research adds.

Lead author Dr Daniela Jakubowicz, from Tel Aviv University, said: ‘The hour of the day — when you eat and how frequently you eat — is more important than what you eat and how many calories you eat.

‘Our body metabolism changes throughout the day.

Results further suggest fasting glucose levels decrease by 54 mg/dl (from 161 to 107) in those eating three meals a day group compared to only 23 mg/dl (from 164 to 141) in those consuming six.

Healthy levels are considered to be less than 108 mg/dl.

Having breakfast as the main meal of the day also significantly reduces the need for insulin by -20.5 units/day (from 54.7 to 34.8) compared to those spread out throughout the day, which requires people have 2.2 more units a day (from 67.8 to 70).

Overall amounts of glucose in the blood are also lower just 14 days after adopting a three meal a day eating plan.

Several trials focused on the relationship between eating or skipping breakfast and changes in body weight, while others looked at the effect of breakfast on daily energy intake.

Participants included habitual and non-habitual breakfast eaters, or both, at a range of body weights who were monitored between 24 hours and 16 weeks.

The researchers found that total daily energy intake was higher in groups who ate breakfast compared with those who skipped it – an average of 260 more calories consumed in a day – regardless of their usual breakfast habits.

And the results showed that those who skipped breakfast were on average one pound (0.44 kilos) lighter.

But the effect of breakfast on weight did not differ between people with a normal weight and those who were overweight.

It has previously been suggested that eating breakfast may help with weight loss because of the efficient burning of calories early in the day preventing overeating later on.

But the reviewers found ‘no significant difference’ in metabolic rates between breakfast eaters and skippers.

And, despite common belief, skipping breakfast was not linked to people feeling hungrier in the afternoon or to differences in energy expenditure.

The researchers said that because of the varying quality of the studies included, the findings should be interpreted with caution.

But study co-author Professor Flavia Cicuttini, of Monash University, said: ‘Currently, the available evidence does not support modifying diets in adults to include the consumption of breakfast as a good strategy to lose weight.’

She added: ‘Although eating breakfast regularly could have other important effects, caution is needed when recommending breakfast for weight loss in adults, as it may have the opposite effect.’

Professor Tim Spector, of King’s College London, discussing the findings, said that people have different preferences for when they eat food, which ‘might suit our unique personal metabolism.’

He added: ‘No ‘one size fits all,’ and prescriptive slow moving diet guidelines filled with erroneous information look increasingly counterproductive and detract from important health messages.

‘While waiting for guidelines to change, no harm can be done in trying out your own personal experiments in skipping breakfast.’