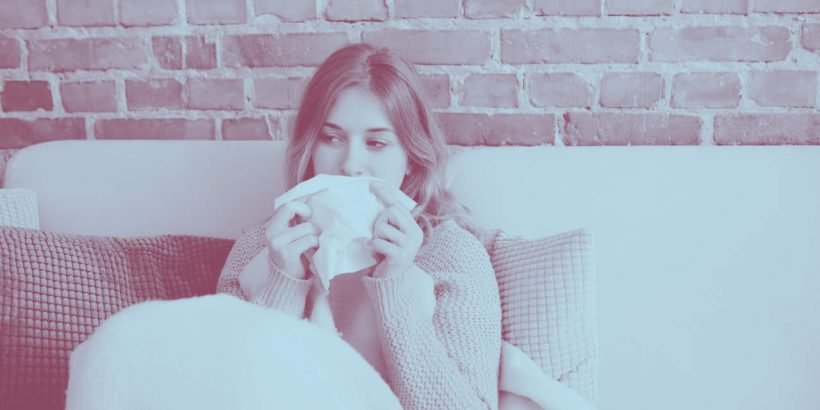 It’s cold and flu season, which means that—like every year around this time—these two viruses are circulating throughout much of the country. Influenza is currently widespread in 36 states, the CDC reported last week. And while common cold numbers are harder to come by (since most of us don’t go to the doctor for treatment), we all probably know someone—or have been that someone—who’s fallen victim to coughing and sneezing in recent weeks.

The common cold is certainly no picnic, and the flu can be downright miserable, or even dangerous. And with so many people sick right now, it raises an interesting question: If you’re already sick with one of these illnesses, is it possible to also catch the other? In other words, can a person be sick with both the flu and a cold at the same time? And if so, what does that feel like?

To find out, Health spoke with William Schaffner, MD, professor of infectious diseases and preventive medicine at Vanderbilt University. Here’s what he thinks about the possibility of such an unfortunate predicament—and what we can do to protect ourselves.

Two viruses at once?

While there’s been plenty of scientific research on influenza and on the common cold, there are no published studies that focus on the concurrence of both at once. But that doesn’t mean it’s not possible, says Dr. Schaffner. To understand how that might happen, he says, it’s important to first know a little about how and why the two illnesses occur.

The influenza virus generally causes symptoms such as fever, chills, fatigue, and weakness. These symptoms can also be accompanied by sinus congestion, sore throat, headaches, and muscle pain. There are several types of influenza virus, two of which (influenza A and B) are the typical causes of seasonal flu.

The common cold, on the other hand, is generally milder, with symptoms such as coughing, sneezing, sore throat, congestion, runny nose, and fatigue. These telltale signs can be caused by a number of pathogens, but the most common culprit is rhinovirus.

“The cold virus spends most of its time up in your nose and your sinuses and the back of your throat, whereas the flu virus gets into the back of your throat and has the tendency to get down into your chest,” says Dr. Schaffner. But they are both respiratory viruses, he adds, and there’s no reason they can’t both infect a person at the same time. The same goes for other causes of cold-like illnesses, such as coronavirus or respiratory syncytial virus (RSV).

The good news? The body can fight two infections at once, although the double-whammy may leave you feeling even worse than a normal bout of cold or flu. “You probably wouldn’t be able to tell that you have both at once,” says Dr. Schaffner. “You would probably just be several degrees more miserable than normal, and you’d have the impression that you’ve got a really nasty case of the flu.”

What about other infections?

A bigger concern may be catching a bacterial infection while you’re already sick with the flu. A 2017 review of literature published in Frontiers in Microbiology highlighted the ability for bacterial illnesses—like pneumonia and staph—to piggyback onto an existing influenza infection.

According to this research, bacterial infections occur afterward or concurrently in as many as 65% of lab-confirmed influenza cases. The flu virus “aids bacterial infection in a number of ways,” the authors wrote: For example, it can impair the immune system and cause cell destruction, “allowing for the spread of bacteria and development of invasive infection.”

Infections like bacterial pneumonia can then make the severity of flu and other viruses much worse, “which is bad news for public health,” the authors wrote. Antibiotics can help treat bacterial infections, they say, but these drugs come with their own problems, like overprescription and the growing threat of antibiotic resistance.

How to protect yourself

That’s why getting an annual flu shot or nasal spray vaccine is the best way to safeguard against getting a nasty combo illness this season. “We don’t have any kind of vaccine against the [common] cold, but we do have one for the flu—which of course is the more serious offender and makes more people very sick,” says Dr. Schaffner.

A flu vaccine may not protect 100% against influenza, but it can reduce your risk of catching it and your risk of experiencing serious complications (like those dangerous bacterial infections). Adults over 65—and younger people with chronic health issues—may also want to talk to their doctor about a one-time pneumonia vaccine, Dr. Scanner adds, for added protection.

You can also protect against the viruses that cause colds and flu by washing your hands regularly, not sharing utensils or glasses, and avoiding other people who are sick. And if you do come down with an illness this season, do yourself a favor and get plenty of rest and fluids. It’s what your body needs to fight off whatever you do have—and whatever else might be lurking in the wings.