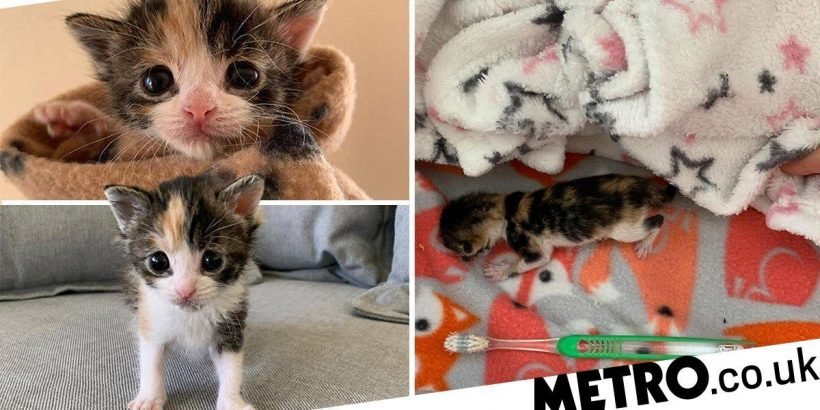 A homeowner in Los Angeles was shocked to find a kitten under their home. To their surprise, the kitty was found without her mum and still had her umbilical cord attached.

They had spotted stray cats around their L.A home and presumed that the cat mum had left behind the kitten while moving around.

After searching the area, they decided to hand in the calico to the Alley Cat Rescue as she was underweight, weighing just 76 grams and needed medical care.

The folks at Alley Cat called the gorgeous youngster Pudding – she was smaller than a toothbrush when she first came in.

Now Pudding, with the help of her carers, continues to grow every day and is just a bit bigger than the bottle she feeds on.

Her wee legs are becoming active and Pudding is slowly starting to live her best kitten life.

‘Pudding is growing and has a powerful set of lungs. Her weight steadily goes up every day. She loves belly rubs, but most of all she loves her food.’

Alley Cat Rescue is now working with the homeowner to see if they can find Pudding’s mum and get her spayed.

But while that happens, Pudding is reaching small milestones. She recently hit 100 grams, found her first purr and began kneading in the air with her tiny paws.

She has now been placed with a foster mum and cuddles up with her after every feeding.

Recently she was pictured with her big girl bottle which is just a bit smaller than she is.

Pretty soon the bottle will look tiny next to her.

MORE: Kitten the size of a tennis ball is determined to grow the same size as his siblings

MORE: Cats are being given buzz cuts to look like little dinosaurs and don’t they look fierce?

MORE: Cats can recognise their own name so if they ignore you they’re just being jerks