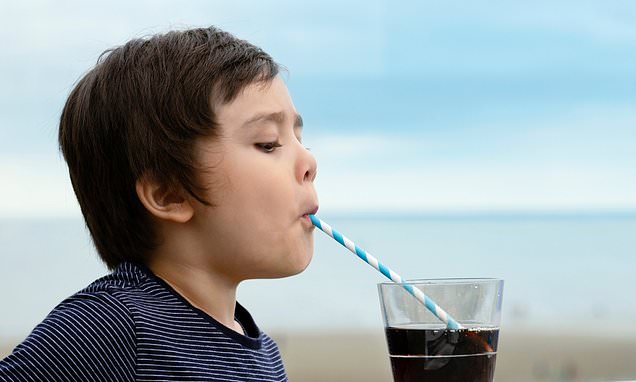 Children who don’t drink water could be consuming 100 extra calories each day, researchers have calculated.

Those youngsters consumed 93 calories more from sugar-sweetened beverages than children who did drink water.

Experts have warned it could raise the risk of children becoming obese, because 3,500 calories – 37 days’ worth – is enough to gain a 1lb of weight.

One third of UK children aged two to 15 are now categorised as overweight or obese, according to official figures. 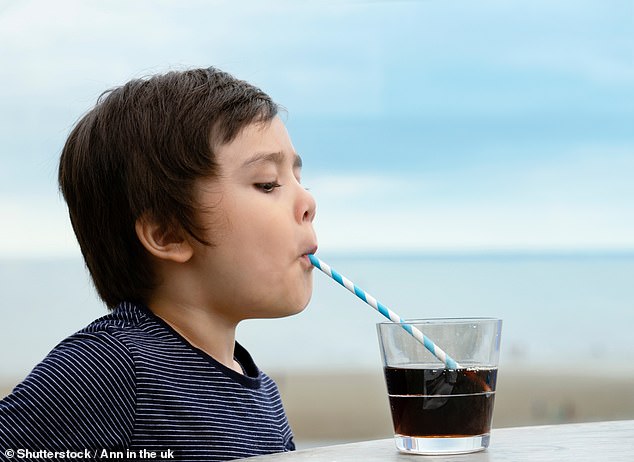 Children who don’t drink water could be consuming 200 extra calories a day from sugary drinks, researchers at Penn State University have said

In the US, nearly one in five young people between the age of six and 19 are obese.

‘And the first beverage option for kids should be water.

Since April 2018, soft drink companies have been required to pay a levy on drinks with added sugar.

Fruit juices and milk are not included in the tax.

The move was aimed to help tackle childhood obesity. Sugar-sweetened soft drinks are the single biggest source of dietary sugar for children and teenagers.

Some drinks, including Fanta, Lucozade, Sprite, Dr Pepper and Vimto, had their recipes changed so they contained less than 5g of sugar and the price did not need to be put up.

However, others like Coca Cola and Pepsi refused to reduce the amount of sugar and, as a result, the price of them increased.

The Government predicted the levy would raise £240million in the first year, which it said would be spent on sports clubs and breakfast clubs in schools.

The sugar tax raised £153.8million in the first six months after it was introduced, between April and October 2018.

‘Because if they’re not drinking water, they’re probably going to replace it with other beverages, like sugar-sweetened beverages, that are less healthy and have more calories.’

Dr Rosinger and his team analysed the drinking habits of 8,400 children aged between two and 19.

The researchers found that on a given day, around one in five children reported that they didn’t drink any water.

The US Department of Agriculture recommends that no more than 10 per cent of a person’s daily calories should come from added sugars.

However, the children who didn’t drink water tended to go over this limit from sugary drinks.

While an extra 100 calories may not seem like a lot on a single day, over time it can have a big impact, Dr Rosinger said.

‘What you have to remember is that an extra 3,500 calories equals one pound of weight gain,’ Professor Rosinger said.

‘So if you’re not compensating for those extra calories, then over a month, you can potentially gain a pound. Over several months, that could add up.’

They did not include 100 per cent fruit juices, drinks sweetened with zero-calorie sweeteners, or drinks that are sweetened by the consumer like tea.

The UK Government introduced a sugar tax on soft drinks in an attempt to cut childhood obesity in April last year.

Sugar-sweetened soft drinks are the single biggest source of dietary sugar for children and teenagers, but the levy was designed to limit the amount of sugar companies can add to their drinks.

On average, young people in the US consume 143 calories from sugary drinks a day.

Dr Rosinger said that the findings, published in the Journal of the American Medical Association Pediatrics, underscore the importance of children having free access to clean water.

He said: ‘Water insecurity is a growing problem in the US, so we need to keep that in mind as important context, especially when it comes to parents who may be giving their kids soda or juice because they distrust the water.’