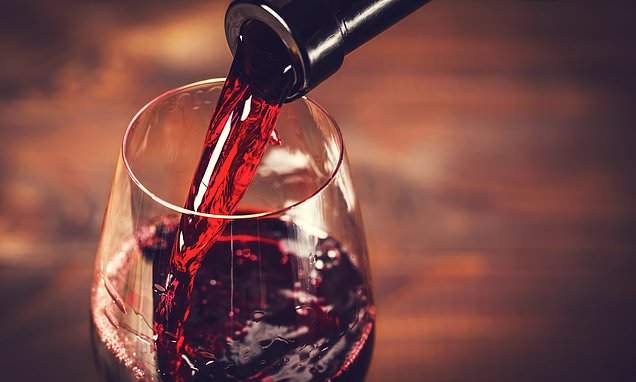 A compound abundant in red wine could pave the way for new treatments for both depression and anxiety, researchers say.

Trials on mice showed resveratrol – found in the skin of grapes – blocked an enzyme that causes depressive and anxious behaviour.

Experts now say the compound, given to the mice in super-strength doses, may be an ‘effective alternative’ to existing drugs.

Although red wine contains resveratrol, consuming the equivalent amount given to mice through drinking alone would kill you. 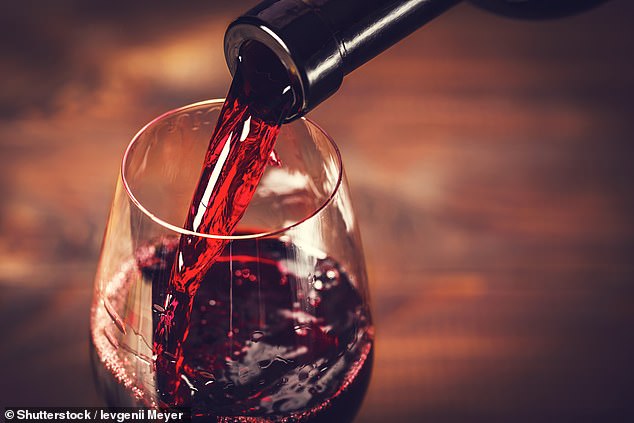 Resveratrol has long been touted as an elixir capable of combating many diseases from cancer to arthritis and even dementia.

Scientists at the University of Buffalo, in upstate New York, used mice to test the effects of resveratrol on depression and anxiety.

They showed signs of anxiety and depression when given too much corticosterone, which regulates the body’s response to stress.

But phosphodiesterase 4 (PDE4) – an enzyme released by corticosterone – was actually to blame for the behaviour, results revealed.

Further tests showed the behaviour shown by the mice was caused because PDE4 lowered levels of a key messenger molecule in the body.

Resveratrol, however, appeared to protect the mice from showing signs of anxiety or depression by inhibiting PDE4.

The ‘effects were similar to those of the PDE4 inhibitor rolipram’, lead author Dr Ying Xu wrote in a report of the study.

She said: ‘Resveratrol may be an effective alternative to drugs for treating patients suffering from depression and anxiety disorders.’

The study, published in the journal Neuropharmacology, also involved Dr Xiaoxing Yin, of the Xuzhou Medical University in China.

Mice involved in the study were given the equivalent of up to 10mg of resveratrol per kilogram of their body weight.

In a 70kg (154lbs) human, this would translate to them needing a dose of 700mg – the equivalent 350 glasses of red wine, an amount that would kill.

The average glass of red wine contains 2mg of resveratrol, according to the Linus Pauling Institute at Oregon State University.

Mice involved in the study were given the equivalent of up to 10mg of resveratrol per kilogram of their body weight.

In a 70kg (154lbs) human, this would translate to them needing a dose of 700mg – the equivalent 350 glasses of red wine, an amount that would kill.

The average glass of red wine contains 2mg of resveratrol, according to the Linus Pauling Institute at Oregon State University.

Antidepressants – which include common brands such as Prozac, Cipramil and Seroxat – are proven to be an effective way of treating depression.

However, the pills all focus on serotonin or noradrenaline function in the brain – not by inhibiting enzymes that may play a role, Dr Xu said.

Only a third of patients with depression see their symptoms improve by taking the powerful medications, she wrote in a report of the study.

Due to resveratrol already being used in food supplements, resveratrol is known to be safe. It would therefore not require safety studies.

Resveratrol – an antioxidant also found in peanuts – has been proven to have anti-inflammatory properties in an array of studies.

It has also been found to cut harmful cholesterol, protect brain function and lower blood pressure.

However, much of the research on resveratrol has been done in animals and test tubes using high amounts of the compound.

Most human studies have focused on supplemental forms of the compound, in super-strength concentrations higher than that found in wine.

Figures from the Anxiety and Depression Association of America suggests up to 40million people are affected by the disorders in the US.

Data from the Mental Health Foundation suggests around a fifth of people in the UK aged 16 show signs of both mental disorders.

DO YOU DRINK TOO MUCH ALCOHOL? THE 10 QUESTIONS THAT REVEAL YOUR RISK

One screening tool used widely by medical professionals is the AUDIT (Alcohol Use Disorders Identification Tests). Developed in collaboration with the World Health Organisation, the 10-question test is considered to be the gold standard in helping to determine if someone has alcohol abuse problems.

The test has been reproduced here with permission from the WHO.

To complete it, answer each question and note down the corresponding score.

0-7: You are within the sensible drinking range and have a low risk of alcohol-related problems.

Over 8: Indicate harmful or hazardous drinking.

8-15: Medium level of risk. Drinking at your current level puts you at risk of developing problems with your health and life in general, such as work and relationships. Consider cutting down (see below for tips).

16-19: Higher risk of complications from alcohol. Cutting back on your own may be difficult at this level, as you may be dependent, so you may need professional help from your GP and/or a counsellor.

20 and over: Possible dependence. Your drinking is already causing you problems, and you could very well be dependent. You should definitely consider stopping gradually or at least reduce your drinking. You should seek professional help to ascertain the level of your dependence and the safest way to withdraw from alcohol.

Severe dependence may need medically assisted withdrawal, or detox, in a hospital or a specialist clinic. This is due to the likelihood of severe alcohol withdrawal symptoms in the first 48 hours needing specialist treatment.