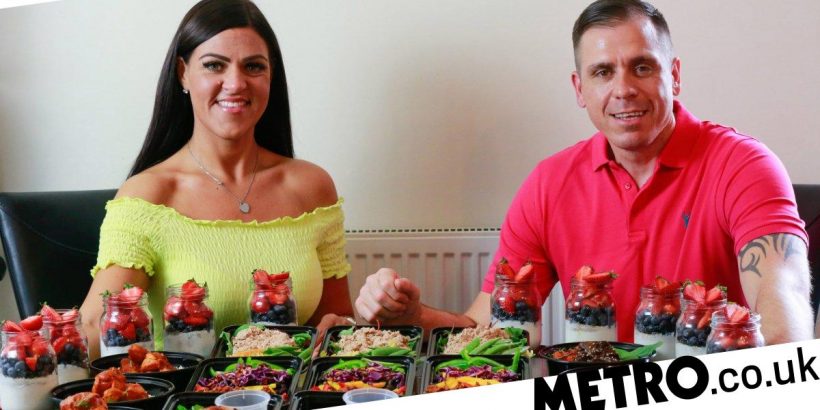 John Clark, 39, and his partner Charlotte Deniz, 34, have lost 15 stone between them, not by spending loads of money on fancy superfoods but by batch-cooking each week’s meals for just 60p a dish.

The couple want to show that it’s possible to overhaul your diet and lose weight in a healthy way while on a budget.

The couple spend around £135 a month on food, carefully planning out colourful boxed up meals for breakfast, lunch, and dinner.

Their weight loss plan was simple: Just make sure that every meal box contains just 400 calories.

Every Sunday they spend six hours preparing their meals for the week so they don’t have to bother with cooking after work.

HGV driver John, of Bolton, who now weighs 13st 5lb, said: ‘We make absolutely everything from scratch and we eat whatever we want.

‘It’s not a diet. I love what I eat and enjoy every mouthful.

‘It can be hard work. I do it on a Sunday and spend hours doing it. But I don’t cook in the week at all. It’s all done in one go.

‘It’s all about making sure your diet is balanced and sustainable. I cook really tasty food, even things that people usually think are unhealthy.

‘It’s a diet plan that allows you to eat whatever you want. What I cook are really nice meals. I’d say it’s the best diet in the world.’

John was the first to start meal prepping, using it as a way to lose weight before he met Charlotte.

Weighing 21 st 6lb at his heaviest, the driver was known as ‘Fat John’ thanks to a diet of burgers, sausage sandwiches, and pub lunches, racking up between 4,000 and 5,000 calories a day.

At 23 John booked a GP appointment when he started to struggle to buy clothes. He was told he was obese.

‘I sat in my car outside desperate, alone and cried,’ he said.

‘I was given some leaflets on what I should and shouldn’t eat but I wasn’t offered much help at all. I didn’t know where to start. I found it really difficult.’

John began working out five times a week and quickly dropped weight, but he hated getting up early to work out.

In 2004 he decided to focus on his diet instead. He took up meal prepping and said the pounds ‘just dropped off’.

In her twenties, Charlotte said she had an ‘awful’ diet and often gorged on takeaways, chips, and burgers in one sitting each day.

She took on John’s approach to prepping meals every Sunday and went from a size 18 to a size eight in the space of a year.

The couple dedicated themselves to making meals that were healthier, budget-friendly, and actually enjoyable.

Now they buy all their supplies on a Friday and cook it all up on Sunday. They spend around £80 on 5kg of chicken, burgers, sausages, mince and fish online, £25 on fruit and vegetables at their local market, and grab everything else from Aldi and Tesco.

Then John will work hard in the kitchen on a Sunday, cooking up four meals a day (breakfast, lunch, a snack, and dinner) for the next seven days for both himself and Charlotte. Each meal goes in one of 56 individual cartons, all shared on Instagram under the name @themealprepking.

Dad-of-two John says: ‘We have a very varied diet and the food we eat is amazing. Some people literally don’t believe it when they see.

‘Unlike some diets these meals aren’t grey and boring. It’s all fun food and is all about moderation and variety.

‘It is sustainable and I wouldn’t give it up for the world.

‘I don’t like to think of myself as having a diet plan. I eat what I want.

‘Now I just want to help other people too. I want to inspire people to stay away from boring diets.’

The couple’s typical diets before and after batch-cooking: