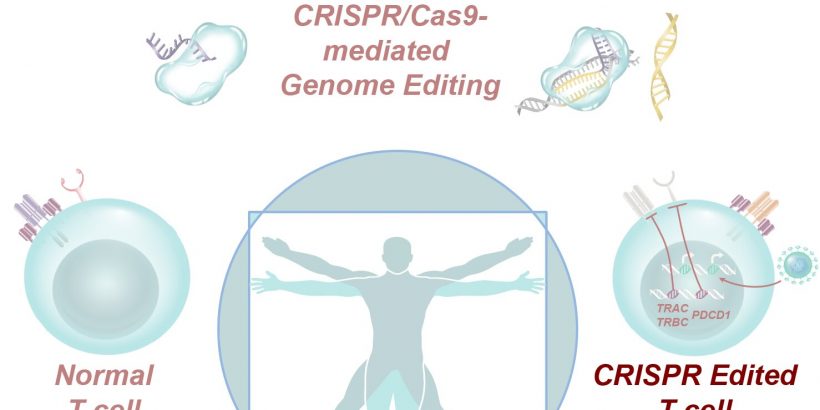 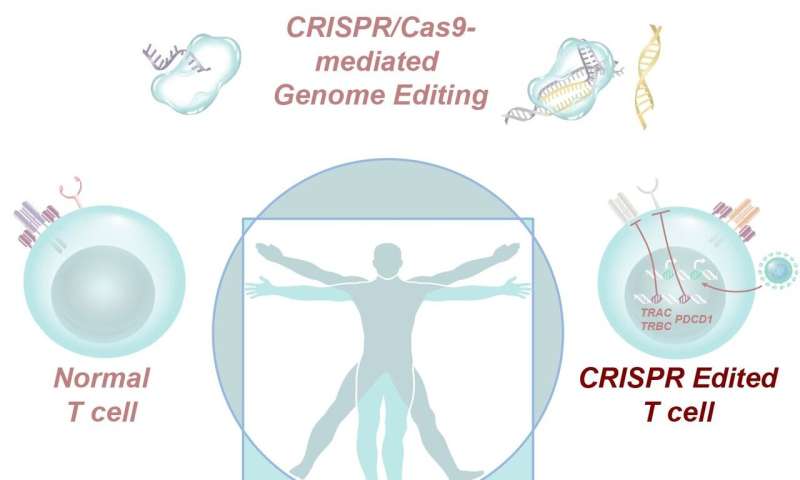 Genetically-edited immune cells can persist, thrive, and function months after a cancer patient receives them, according to new data published by researchers from the Abramson Cancer Center of the University of Pennsylvania. The team showed cells removed from patients and brought back into the lab setting were able to kill cancer months after their original manufacturing and infusion. Further analysis of these cells confirmed they were successfully edited in three specific ways, marking the first-ever sanctioned investigational use of multiple edits to the human genome. This is the first U.S. clinical trial to test the gene editing approach in humans, and the publication of this new data today in Science follows on the initial report last year that researchers were able to use CRISPR/Cas9 technology to successfully edit three cancer patients’ immune cells. Penn is conducting the ongoing study in cooperation with the Parker Institute for Cancer Immunotherapy and Tmunity Therapeutics.

“Our data from the first three patients enrolled in this clinical trial demonstrate two important things that, to our knowledge, no one has ever shown before. First, we can successfully perform multiple edits with precision during manufacturing, with the resulting cells surviving longer in the human body than any previously published data have shown. Second, thus far, these cells have shown a sustained ability to attack and kill tumors,” said Carl June, MD, the Richard W. Vague Professor in Immunotherapy and director of the Center for Cellular Immunotherapies in the Abramson Cancer Center and director of the Parker Institute for Cancer Immunotherapy at the Perelman School of Medicine at the University of Pennsylvania and the study’s senior author.

The findings are the latest milestone in Penn’s history as cellular and gene therapy pioneers, including development of the first FDA-approved CAR T cell therapy, Kymriah, for pediatric and adult blood cancer patients.

Patients on this trial were treated by Edward A. Stadtmauer, MD, section chief of Hematologic Malignancies at Penn, who is the co-lead author on the study along with Joseph A. Fraietta, Ph.D., an assistant professor of Microbiology at Penn. The co-senior author is Simon F. Lacey, Ph.D., director of the Translational and Correlative Studies Laboratory in the Center for Cellular Immunotherapies.

The approach in this study is closely related to CAR T cell therapy, in which patient immune cells are engineered to fight cancer, but it has some key differences. Just like CAR T, researchers in this study began by collecting a patient’s T cells from blood. However, instead of arming these cells with a receptor against a protein such as CD19, the team first used CRISPR/Cas9 editing to remove three genes. The first two edits removed a T cell’s natural receptors so they can be reprogrammed to express a synthetic T cell receptor, allowing these cells to seek out and destroy tumors. The third edit removed PD-1, a natural checkpoint that sometimes blocks T cells from doing their job.

“This new analysis of the three patients has confirmed that the manufactured cells contained all three edits, providing proof of concept for this approach. This is the first confirmation of the ability of CRISPR/Cas9 technology to target multiple genes at the same time in humans and illustrates the potential of this technology to treat many diseases that were previously not able to be treated or cured,” June said.

Once the three genes are knocked out, a fourth genetic modification was accomplished using a lentivirus to insert the cancer-specific synthetic T cell receptor, which tells the edited T cells to target an antigen called NY-ESO-1. Previously published data show these cells typically survive for less than a week, but this new analysis shows the edited cells used in this study persisted, with the longest follow up at nine months.

Several months after the infusion, researchers drew more blood and isolated the CRISPR-edited cells for study. When brought back into the lab setting, the cells were still able to kill tumors.

“Previous studies have shown these cells lose function within days, so the fact that the CRISPR-edited cells in this study retained anti-tumor function for a significantly longer period of time after a single infusion is very encouraging,” June said.

The CRISPR-edited T cells used in this study are not active on their own like CAR T cells. Instead, they require the cooperation of a molecule known as HLA-A*02:01, which is only expressed in a subset of patients. This means that patients had to be screened ahead of time to make sure they were a match for the approach. Participants who met the requirements received other clinically-indicated therapy as needed while they waited for their cells to be manufactured. Once that process was completed, all three patients received the gene-edited cells in a single infusion after a short course of chemotherapy. Analysis of blood samples revealed that all three participants had the CRISPR-edited T cells take root and thrive in the patients. While none responded to the therapy, there were no treatment-related serious adverse events.