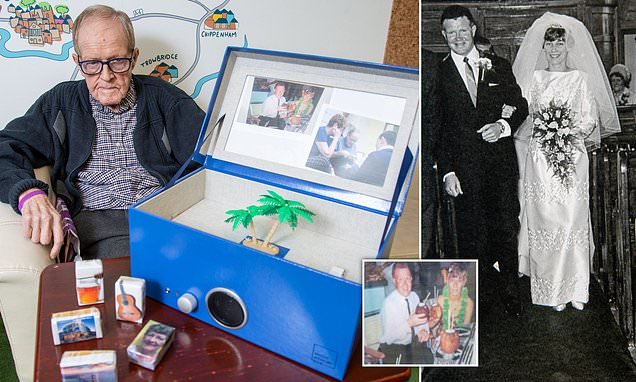 A dementia-striken husband who doesn’t speak has been able to reconnect with his wife with the help of a ‘music memory box’.

The Music Memory Box is a kit which families fill with significant objects such as photographs which also plays songs.

Steve Garrity, 82, and his wife Monica, 74, of Bristol, use the innovative box to play their love song – ‘Temma harbour’ by Mary Hopkin – while remembering their happy life together.

Mr Garrity has slowly deteriorated since his diagnosis of dementia and Parkinson’s in 2011 and has been unable to speak to his wife for five years.

Mrs Garrity said the box has ‘wonderful’ for the couple, as Mr Garrity hums along to the music and holds out his hand to his wife.

The combination of memorabilia in the box, which is still in prototype, created by Chloe Meineck, 28, have seen incredible reactions from patients who struggle to communicate due to living with dementia or similar conditions. 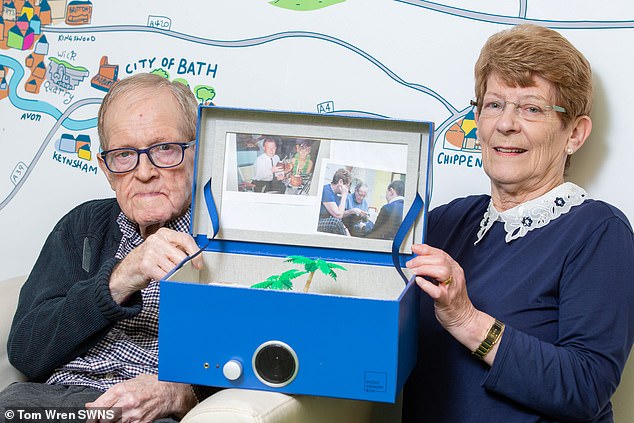 Steve Garrity, 82, and his wife Monica, 74, have been able to reconnect with the use of the ‘Music Memory Box’ after he lost the ability to communicate due to dementia and Parkinson’s 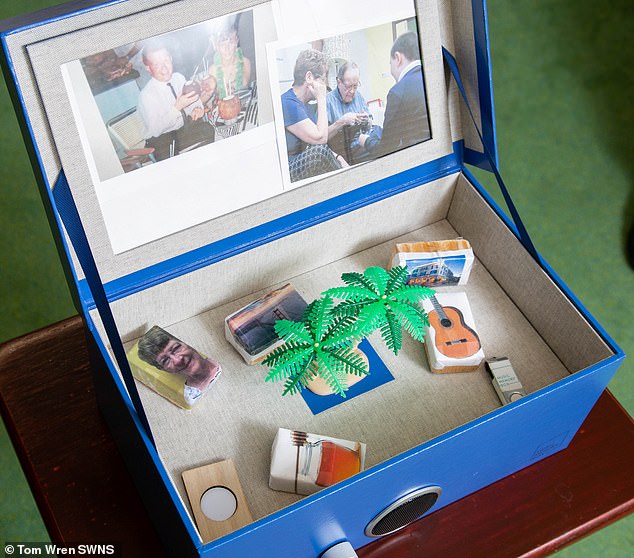 The Music Memory Box (pictured) is a kit which families fill with significant objects such as photographs which also plays songs, created by Chloe Meineck, 28 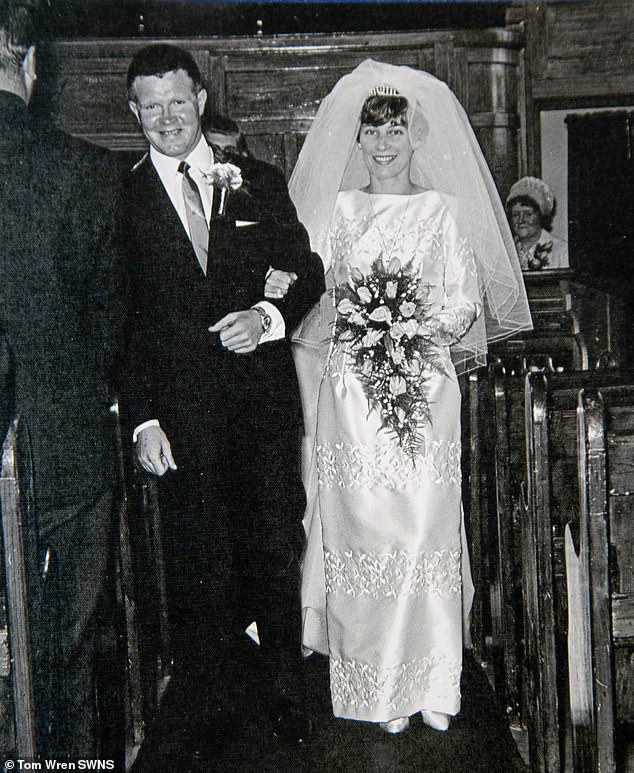 Mr and Mrs Garrity married in Britain in 1967 (pictured) and moved to Ghana the day after their wedding day. Palm trees in the box and ‘Temma harbour’ by Mary Hopkin are able to take the couple back to their most precious times

Mrs Garrity said: ‘We have been able to connect again, it is wonderful.

‘He doesn’t usually communicate with me but when the music plays, he hums along and even holds out his hand to grab mine.’

When the music is played through the box by the couple placing a miniature palm tree figurine in the centre – an object which signifies the memory – Mr Garrity can instantly remember days dancing with his wife on the coastline of Ghana.

‘We moved to Ghana the day after our wedding more than 50 years ago so the song is very emotive,’ Mrs Garrity said.

‘It takes us back to when we got married, it feels like we are back in Ghana together.’

According to founder Chloe Meineck, 28, the box ‘harnesses the evocative power of music’ to create a tool for people living with dementia to ‘reminisce, reawaken and reconnect with loved ones’.

Her journey to designing the box began as a child – visiting her 104-year-old great-grandmother who was living with dementia and playing the piano together.

During a 3D design course at the University of Brighton, Ms Meineck made the first bespoke version of the box as part of a final project after learning to code.

Since graduating in 2012, Ms Meineck has received grant funding from an artist residency to produce 28 prototypes of the product to send to families to test.

The kickstarter fund she set up for the initial launch of the project has been hugely successful – generating £25k from donors in just two weeks – and Ms Meineck is now preparing to send the first orders.

Ms Meineck, who has won multiple awards as a young designer, added: ‘We have tested it with many families and I have been able to make improvements and ask for opinions.

‘I am so happy the kickstarter has reached the funding target and we can start sending the products out to help families around the world.’

Mr and Mrs Garrity, who married in Britain in 1967, lived in the African country for four years and used to dance to their song together under the palm trees on the coast.

Sadly, in 2011, Mr Garrity was diagnosed with Parkinson’s and Lewy body dementia.

This type of progressive dementia that leads to a decline in thinking, reasoning and independent function.

Since 2013 when he moved to Deerhurst care home in Bristol, Mr Garrity has lost the ability to speak to his wife, as many sufferers of both Lewy body dementia and Parkinson’s struggle with speech.

However, Mrs Garrity was one of the first users in the UK to trial the box in 2017.

When the object is placed in the centre of the box, the matched song begins to play from a speaker situated on the front of the device.

The couple, who have two children – Mark, 50 and Kirsty, 48 – used to be keen ballroom and rock and roll dancers.

Although Mr Garrity now uses a wheelchair, they share a love of music and Mrs Garrity said her husband ‘lights up’ as soon as one of their favourite songs are played.

She said: ‘Whenever we play the songs it is so emotive. Steve has been deteriorating and can’t speak any more. 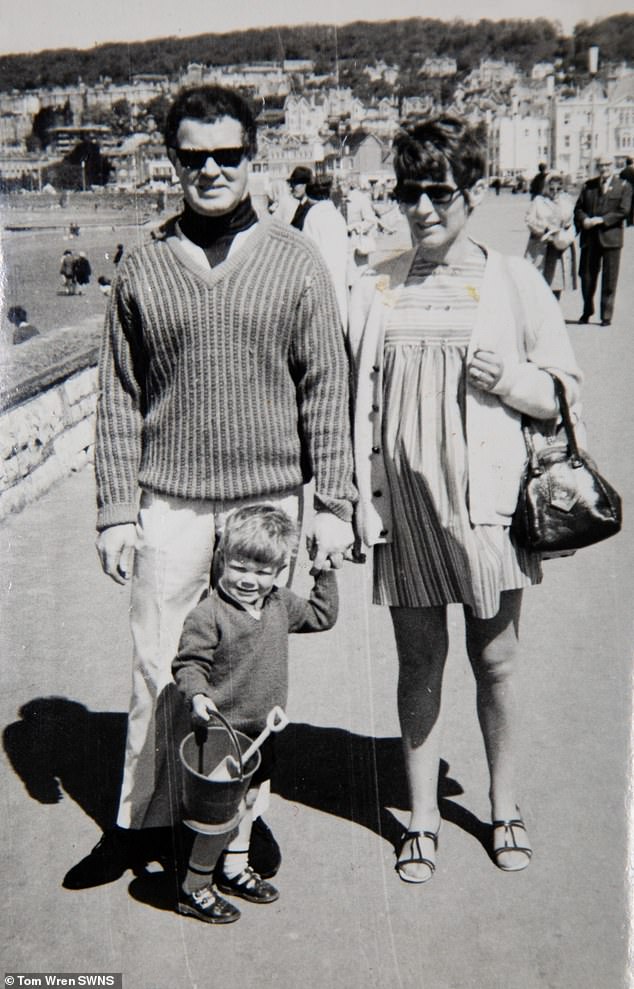 In 2011, Mr Garrity was diagnosed with Parkinson’s and Lewy body dementia. Pictured, with his wife and one of their children in 1971. 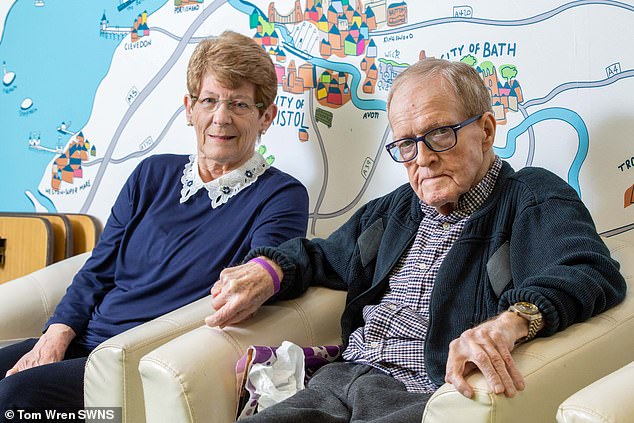 Since 2013 when he moved to Deerhurst care home in Bristol, Mr Garrity has lost the ability to speak to his wife because of his dementia and Parkinson’s 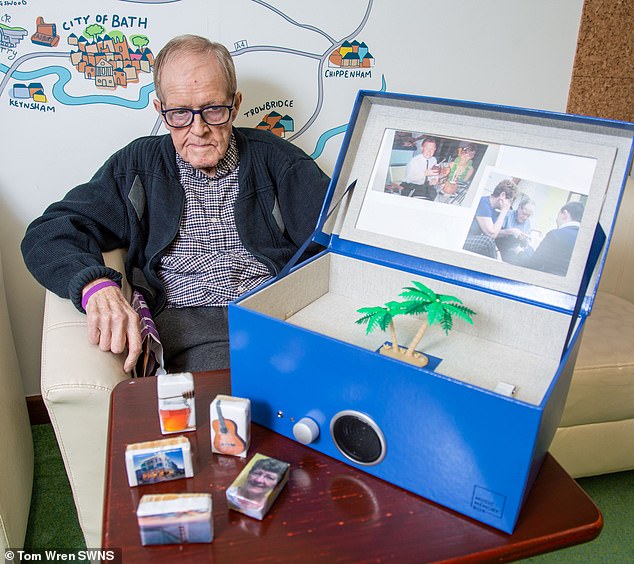 Mrs Garrity said her husband ‘lights up’ as soon as one of their favourite songs is played. Pictured, with the box and objects replicating their memories, such as a guitar and palm trees

‘He doesn’t make many facial expressions due to his condition but his memory is still there.

‘He remembers the music from different points in our lives once the song starts to play.

‘The technology is amazing.’

Mrs Garrity also uses other objects in the box to play music from various monumental events in their lives to remind Mr Garrity about other poignant times.

She added: ‘We have a guitar as one of the models.

‘This links to the song La Paloma by Andre Rieu which Garrity asked a guitarist to play to me in a restaurant.

‘Steve knows it as soon as it comes on and instantly we are back having a meal together.

‘We also have a photograph of myself in there which plays one of our favourite songs, Portrait of My Love by Matt Monro.’

There are 850,000 people estimated to be living with dementia in the UK, and five million in the US.

It is estimated that the number of people living with dementia in the UK by 2025 will rise to over one million.

WHAT IS LEWY BODY DEMENTIA?

Lewy body dementia (LBD) is the second most common form of degenerative dementia after Alzheimer’s.

It is the form Robin Williams was diagnosed with before he took his own life in 2014.

Unlike Alzheimer’s, LBD affects the brain regions responsible for vision – as opposed to memory.

That means sufferers may start with memory loss, but over time the more debilitating symptoms will be powerful hallucinations, nightmares and spatial-awareness problems.

LBD is closely connected to Parkinson’s disease, meaning that many sufferers will develop Parkinson’s as well – as happened to Robin Williams.

The most common symptoms include:

Many sufferers will first develop Parkinson’s, suffering physical disabilities, before doctors diagnose their dementia. That is what happened to the late revered actor Robin Williams.

Some will start with memory loss that could be mistaken for the more common Alzheimer’s disease. Over time, they will develop symptoms more clearly associated with LBD.

There is no known cause. What we do know is that risk increases with age.

At a cellular level, LBD is characterized by tiny clumps of abnormal proteins produced by the brain when its cells are not working properly.

They cause memory problems, although these don’t tend to be as severe as with Alzheimer’s — which is linked to a build-up of the protein beta-amyloid.

Another key difference is that Lewy body dementia affects regions of the brain responsible for vision, causing powerful hallucinations, nightmares and spatial-awareness problems.