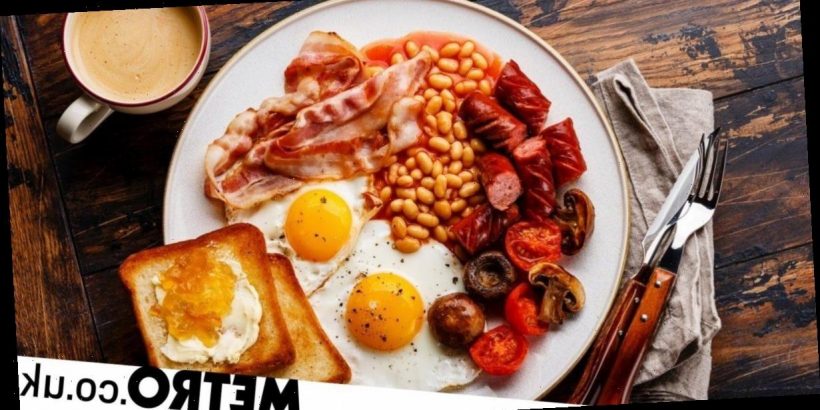 Swap that measly bowl of cereal for a proper plate of breakfast.

Having a big morning meal could help you lose weight by making you burn two and a half times as many calories throughout the day, says new research.

Researchers analysed the metabolism of 16 men in a lab experiment, asking them to consume a low-calorie breakfast and a high-calorie dinner one day, then vice versa on the other day.

They found that eating a larger breakfast and a smaller dinner boosted diet-induced thermogenesis (DIT), the generation of heat in the body that burns up calories.

This occurred even if the total calories consumed throughout the day remained the same.

It was also found that eating a low-calorie breakfast boosted an appetite for sweets throughout the day.

Study author Dr Juliane Richter said: ‘Our results show a meal eaten for breakfast – regardless of the amount of calories it contains – creates twice as high diet-induced thermogenesis as the same meal consumed for dinner.

‘This finding is significant for all people as it underlines the value of eating enough at breakfast.

‘Eating more at breakfast instead of dinner could prevent obesity and high blood sugar.

‘We recommend that patients with obesity as well as healthy people eat a large breakfast rather than a large dinner to reduce body weight and prevent metabolic diseases.’

The findings back up those from a 2017 study of 50,000 adults, which found that eating a big breakfast, a medium lunch, and a small dinner led to lower BMIS.

Nutritionists tracked the participants for seven years and discovered eating the largest meal in the morning was among the most effective strategies for preventing long-term weight gain.

It’s thought that consuming a large meal in the morning, when our metabolism is at its best, helps to prevent cravings for sugary foods later on in the day and helps us feel fuller for longer.