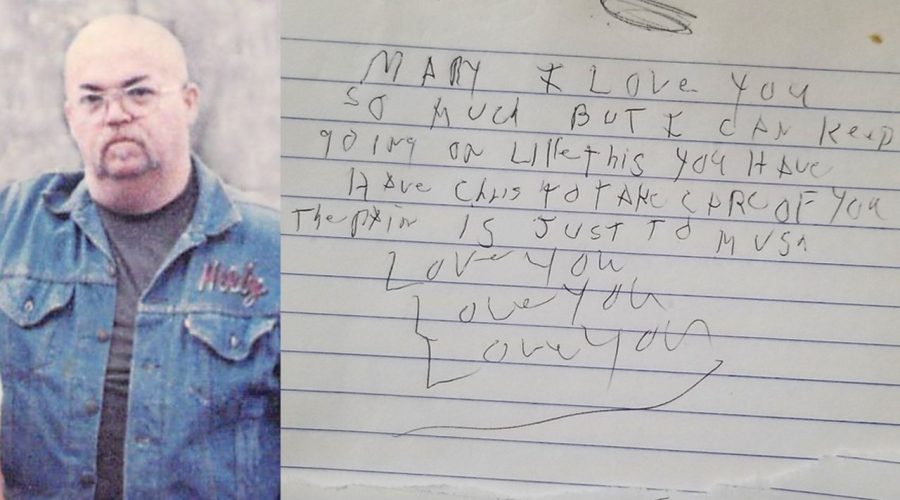 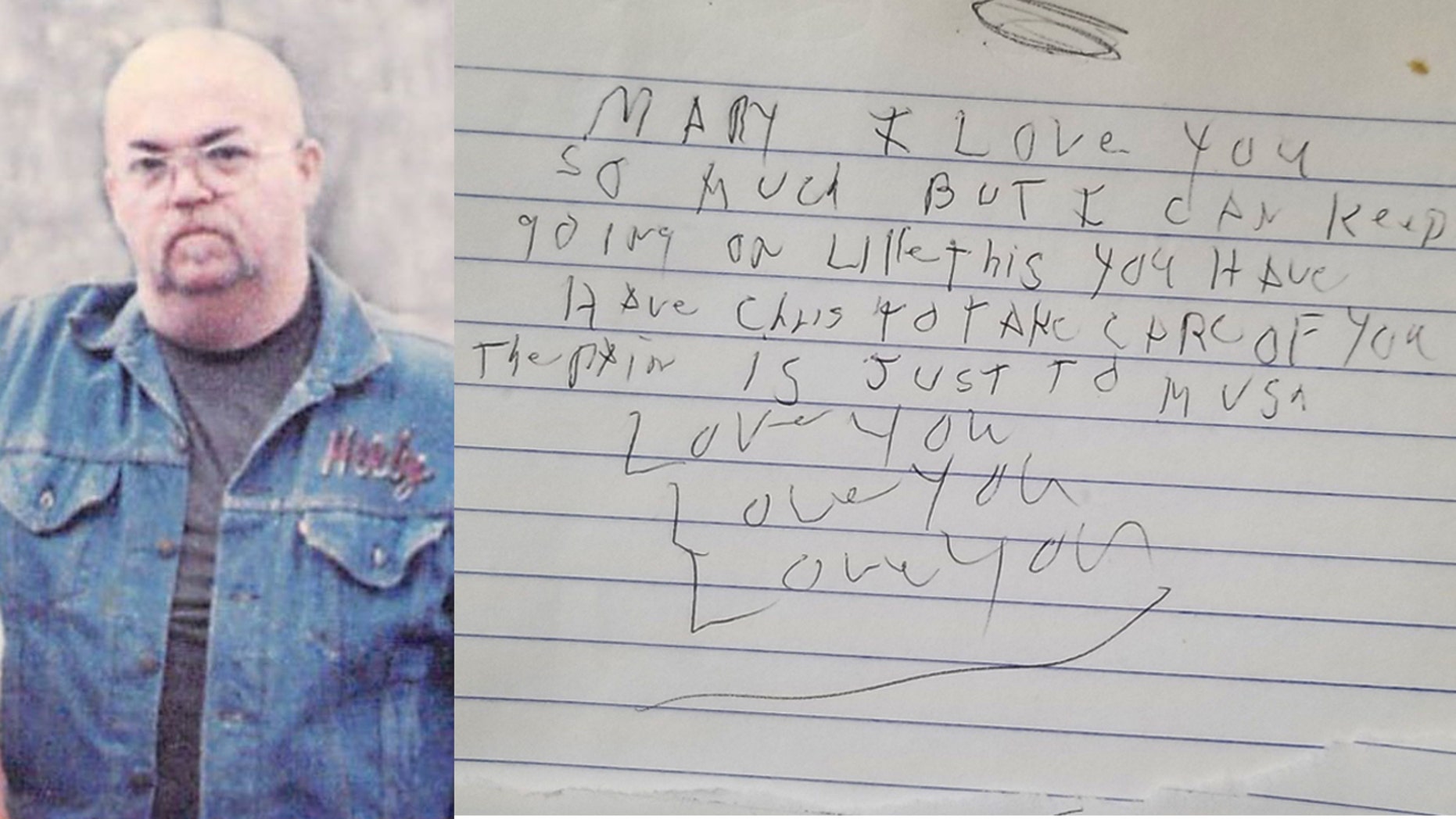 U.S. Air Force veteran Herb Erne II, 76, of North Carolina, died by suicide in February 2018. On the right is the note to his wife, saying he could no longer stand the chronic pain.

One woman spoke of how her mother, at 72 years old, and in pain because of degenerative bone disease, saw only one way out after her opioids were tapered down. She committed suicide.

A husband whose wife of 50 years suffers from neurological and spinal diseases and who no longer can get a prescription for painkiller patches said, “A welcome death has become a discussion.”

Paul Wayman, a 69-year-old veteran, wrote: “The VA cut my pain meds cold turkey after over 25 years. I now buy heroin on the street.”

“You need to talk with veterans. My friend has more metal and screws in him than a robot, but no more pain meds. Suicide is the only light at the end of the battlefield," Wayman said. "I used to do a lot of volunteer work, loved doing it with my wife. Now I get high so can walk.”

AS DOCTORS TAPER OR END OPIOID PRESCRIPTIONS, MANY PATIENTS DRIVEN TO DESPAIR, SUICIDE

“All we’re asking is some relief. And some quality of life," he said. "Ending life now is not on bucket list. I do think about it all the time.”

Wayman is among the hundreds who reached out to Fox News through emails and messages on social media, following the publication of a three-part series on the nation's struggle to address its crippling opioid crisis, caused mainly by illegal drugs, and the unintended victims – chronic pain sufferers who have relied on prescribed opioids for relief – left in its wake.

The series showed the federal government’s approach to addressing the overdose epidemic by targeting the supply and prescribers of opioids has unwittingly led many doctors to cut down or cut off their patients’ pain medications altogether. The approach – bolstered by 2016 Centers for Disease Control and Prevention (CDC) guidelines for opioid prescribing that, despite the agency’s warning that they merely were suggestions, not to be enforced as law – has left many chronic pain sufferers undertreated, with some contemplating taking their own life.

Pain patients who shared their frustrations and desperation and, in several cases, questions about whether they could go on much longer included a wide range of mothers, fathers, executives, farmers, maintenance workers, doctors, nurses, law enforcement officials and veterans. All described their experience of being limited by their diseases and pain to being debilitated and bedridden, after being tapered down or denied continued prescription opioids.

“My wife lives in extreme pain,” wrote Tom Walker of Lousiana. “She has had countless epidural procedures, to no avail. And add one very invasive back surgery, to no avail. She suffers from three different neurological diseases as well.”

The only source of relief, transdermal fentanyl patches, was discontinued, he said.

“When I reminded the doctor about his Hippocratic Oath, he informed us that he was not going to lose his job over a patient,” said Walker, who has been married for 50 years. “She went thru [sic] a very painful ‘Cold Turkey’ process.”

Casting the restrictive policies on painkillers as a “mutant outgrowth of the CDC's position on opioids,” Walker said, “I am afraid that this has become the cause du jour for too many law enforcement agencies and politicians.”

DOCTORS CAUGHT BETWEEN STRUGGLING OPIOID PATIENTS AND CRACKDOWN ON PRESCRIPTIONS

Julie McLeland wrote: “My mother hung herself in August after her ‘pain management’ doctor made some radical changes to her drug protocol.”

“She was only 72 and had degenerative bone disease in her back,” McLeland said. “She lived in misery and died in despair because it was politically popular to ignore patients who desperately need medication and paint them as addicts without moral compasses. She is loved and missed. Thank you for giving her a voice.”

Herb Erne III, a registered nurse, wrote: “My father was a victim of the opioid scare, he took his life because nobody would help him with his pain. He was 76 with several health problems, one being chronic leg pain that started about 18 month prior to his suicide. Nothing would help with the pain.”

“He was scheduled to have surgery this past January. The surgeon decided to postpone the surgery until my father had regained his strength, he was receiving Home Health at the time" Erne wrote. "He asked his primary MD for help with the pain but he would not write for narcs and nothing he tried was working for pain control.”

Erne continued: “The MD referred him to a pain clinic, with similar results. On February 10th of this year, my father put a gun in his mouth and pulled the trigger. My mother was out at the time and found him when she returned home. I arrived shortly after. He left a note saying he just could not take the pain.”

Erne says his father, a U.S. Air Force veteran and former employee of General Electric's aircraft division, was one of the many pain patients who are the silent victims of the opioid crisis.

"As a nurse, I have seen addicts and the other end of opioid abuse,” he said, “but there is another side to this crisis that people are not talking about, those that actually need pain medications but cannot get them because of the ‘fear factor’” of running afoul of the anti-opioid – including legal ones taken safely under medical supervision – backlash.

Pain patient advocate Bill Murphy of New Hampshire said: “The voices of addiction recovery advocates have been very effective over recent years, and rightly so. The problem against which they fight is very serious and the funding they have received for addiction education and more effective rehabilitation facilities is outstanding.”

“But the chronically ill who do not abuse, who do not divert, have become the unintended victims of misguided and overzealous efforts by policy and regulation making bodies in the government," he said. "Addiction does not seek managed care. Pain management returns and improves function. Our leaders need to understand this.”

Another veteran wracked by pain from battlefield injuries wonders where the appreciation of the country he risked his life for is as health care providers deny him the medical relief that long kept him functional and grateful to wake up each day.

“This has to stop” wrote Rick Campbell, a disabled veteran who lives in Alabama and describes being in pain three-fourths of his waking hours. “I have been on opiates for over 15 years and have not overdosed or had a medical emergency due to them, but am being forced off and left to suffer in pain.”

“It is insane and we are suffering," he said. "It is sad our country cares more about illegal drug users than they do the veterans that served this country and need the medication and have documented proof of it.”

The Veteran's Administration was contacted for comment on this story, but did not respond before publication.

But Dr. Stephen Gelfand, a member of the Physicians for Responsible Opioid Prescribing (PROP), which says that opioids for chronic pain harm people more than they help, said in an email: “The efforts of PROP should not be derailed by the one-sided, opioid industry efforts to disparage the CDC Guideline.”

Referring to a news item in South Carolina about a large drug-trafficking operation that was selling heroin, fentanyl, crack cocaine, among other drugs, Gelfand said: “I am sick and tired of hearing how there should be few limits to opioid prescribing, when the track record of widespread over-prescribing has led, not only to the staggering rising toll of opioid-related addiction and death, but also to the great expansion of this lucrative criminal illicit opioid drug trade which affects society and all of us.”

Gelfand said there are doctors and drug companies that overstate the negative impact of restricting prescription opioids because of  “a financial stake in maintaining the volume of opioid prescriptions.”

“They have taken advantage of chronic pain patients on opioids, many of whom suffer from opioid use disorder or the disease of addiction, which is characterized by denial and withdrawal symptoms, including pain, and used as an excuse for opioids being ‘needed’ lest they are at risk for ‘suicide,'" he wrote. "In other words, the occurrence of withdrawal, which is an inevitable consequence or direct effect of chronic opioid use, is being used as a reason to disparage the CDC Guideline and reject important gradual opioid tapering regimens, especially at high doses, or the more difficult discontinuation of opioids in some patients, or the essential referral of others for needed addiction treatment services, including the use of buprenorphine.”

“We believe in careful, gradual tapering of opioids to avoid or significantly attenuate withdrawal, as well as in the imperative of the prevention of addiction initially, by avoiding opioids in the vast majority of patients with chronic non-cancer pain, while prescribing them only for a carefully screened and monitored select minority.”

Dr. John Swicegood, an Arkansas physicain who has been a pain specialist for 33 years, vehemently disagreed, and lamented “the harm brought about by this ‘opioid crisis’ narrative… throwing every legitimate patient suffering chronic pain, even cancer and palliative pain, under the bus.”

“I went personally to all Arkansas congressional offices more than once explaining this, that a social narrative was replacing science. lt was curious to just see someone's eyes glaze just over when I went on to explain this, I kept saying, the ‘opioid crisis’ is not your grandmother taking 3 lortabs per day," Swicegood wrote in an email.

"We see about 4,500 encounters per year – and they are infirmed, sick, crippled, in wheelchairs, walkers, having either failed spine or orthopedic surgery or not candidates – this is the group in the shadows. It is not your young tanned rested male or female walking in with minor findings wanting disability and opiates (we screen them out – this BTW is the population of misuse, diversion and addiction, enabled by our failed culture).”

"This was an opportunity for [insurance companies] to bail on opiate prescription coverage as well as to place public focus implying pain care was addicting everyone," Swicegood said, "and this was the crisis, to the extent physicians were to blame, the government was not stopping bad doctors. For example, pill mills are mostly uncredentialed physicians that the DEA continues to re issue schedule 2 controlled substance permits -despite knowing they were selling RX for cash. This continues in our area."