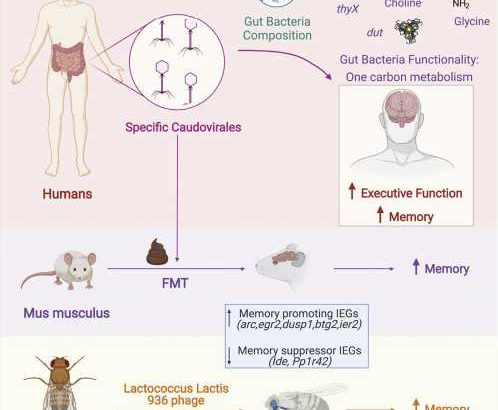 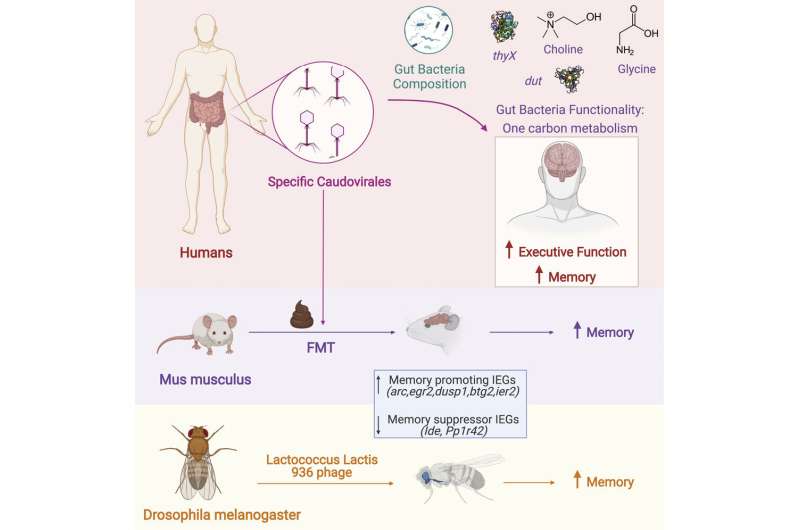 A team of researchers affiliated with a large number of institutions in Spain has found evidence of the presence of certain bacteriophages in the gut promoting better executive function and memory in flies, mice and humans. In their paper published in the journal Cell Host and Microbe, the group describes their study of the impact of bacteriophages on mental function.

Prior research has shown that the presence of certain types of bacteria in the gut can promote or hinder mental functioning. In this new effort, the researchers wondered if the same might be true of bacteriophages, which are viruses that parasitize bacteria and reproduce inside of them.

To find out if there might be a link between gut bacteriophage levels and cognitive abilities, the researchers focused on Microviridae and Caudovirales. They first tested fecal samples from 114 volunteers and then again from another 942 volunteers, both times measuring levels of either bacteriophage. They also gave each volunteer several memory and cognitive tests. They found that those volunteers with higher levels of Caudovirales tended to do better on the tests. In contrast, those with high levels of Microviridae tended to do worse on the tests.

The researchers then conducted a study of various types of foods to find out how the two kinds of bacteriophage might make their way into the human gut. They found that the most common route appeared to be through dairy products.

The researchers continued their work by transplanting fecal samples from the human volunteers into the guts of fruit flies and mice. They then tested their cognitive and memory abilities against control groups. As with the human test subjects, the researchers found that those given samples with high levels of Caudovirales tended to do better on the tests, while those given doses of Microviridae did worse.