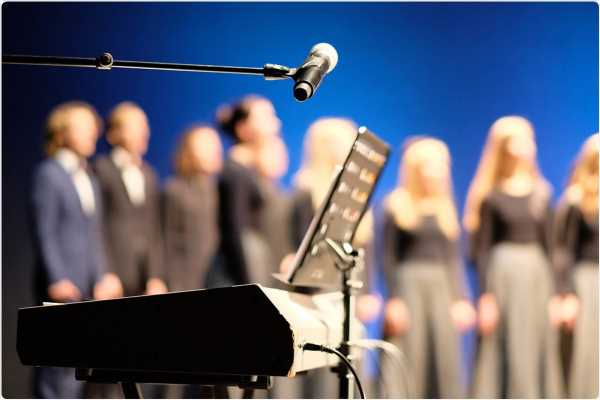 SARS-CoV-2 spreads through respiratory droplets when an infected person coughs, sneezes, speaks and breathes. In some instances, it can also spread by singing. Previous reports have shown outbreaks involving singing groups.

Now, a team of researchers from the Netherlands and Sweden demonstrates that airborne spread via infectious droplets or aerosols over longer distances of more than 1.5 meters due to singing is possible during singing events.

The study, which appeared on the pre-print server medRxiv*, the researchers described SARS-CoV-2 transmission in six singing events between September and October 2020 across the Netherlands, with attack rates from 25 to 74 percent. 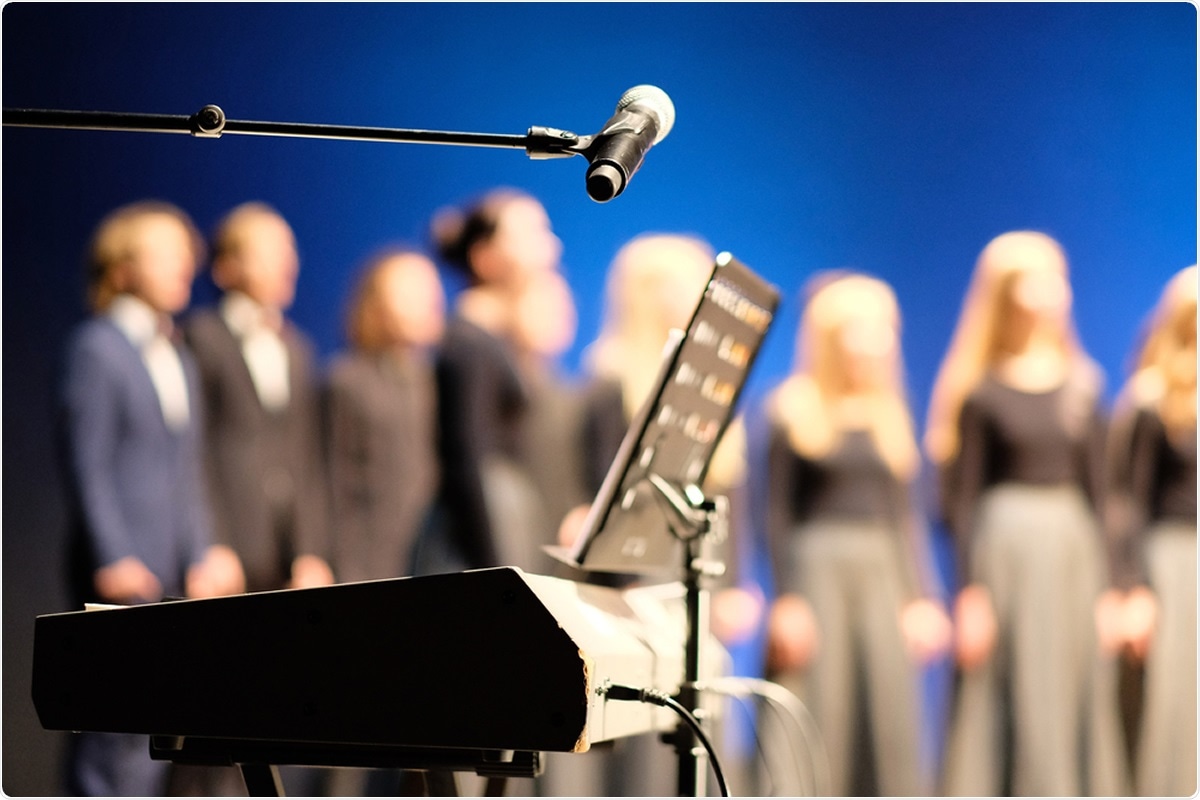 Previous studies and the media described multiple outbreaks with a high attack rate among singing groups between March and September 2020 in the Netherlands.

These reports suggest a potentially elevated risk of singing for SARS-CoV-2 transmission. However, it was unclear whether the outbreaks reported were due to frequent and prolonged social contact before, during, or after the singing event or if singing itself was a risk.

Since March 2020, singing groups stopped practicing in the Netherlands due to the widespread transmission of SARS-CoV-2 alongside other public health measures.

When governments began lifting restrictions due to the decreasing number of cases, singing in groups was allowed in July 2020, provided they follow the specific recommendations. These include following ventilation guidelines, singing in a zigzag formation, and using a room with mandatory ventilation rates.

During this time, universal masking or the wearing of masks in public was not yet mandatory.

In the Netherlands, about one million singers participate in 24,000 choirs, and about 70 percent of ensembles resumed their practices from September 2020. From then until October 2020, there was a sharp increase in the weekly incidence and case toll of COVID-19 in the country, from 31.4 to 391 per 100,000.

In the study, the team aimed to determine the correlation between singing practices resumption and the rapid increase of COVID-19 cases.

From September through October 2020, they investigated six clusters of COVID-19 cases among those who attended singing events. Four groups were reported to be associated with choir rehearsals, one with a choir performance and one with a singing ensemble during a church service.

The team collected data by phone call or email and through online questionnaires to arrive at the study findings. After collecting and analyzing the data, the team found that transmission for most singing group members took place at singing events.

In the mentioned five events, the positive cases had little to no contact outside of the events, except for those who lived and traveled together to the event. About ten individuals lived together, and of these, seven had contracted COVID-19. 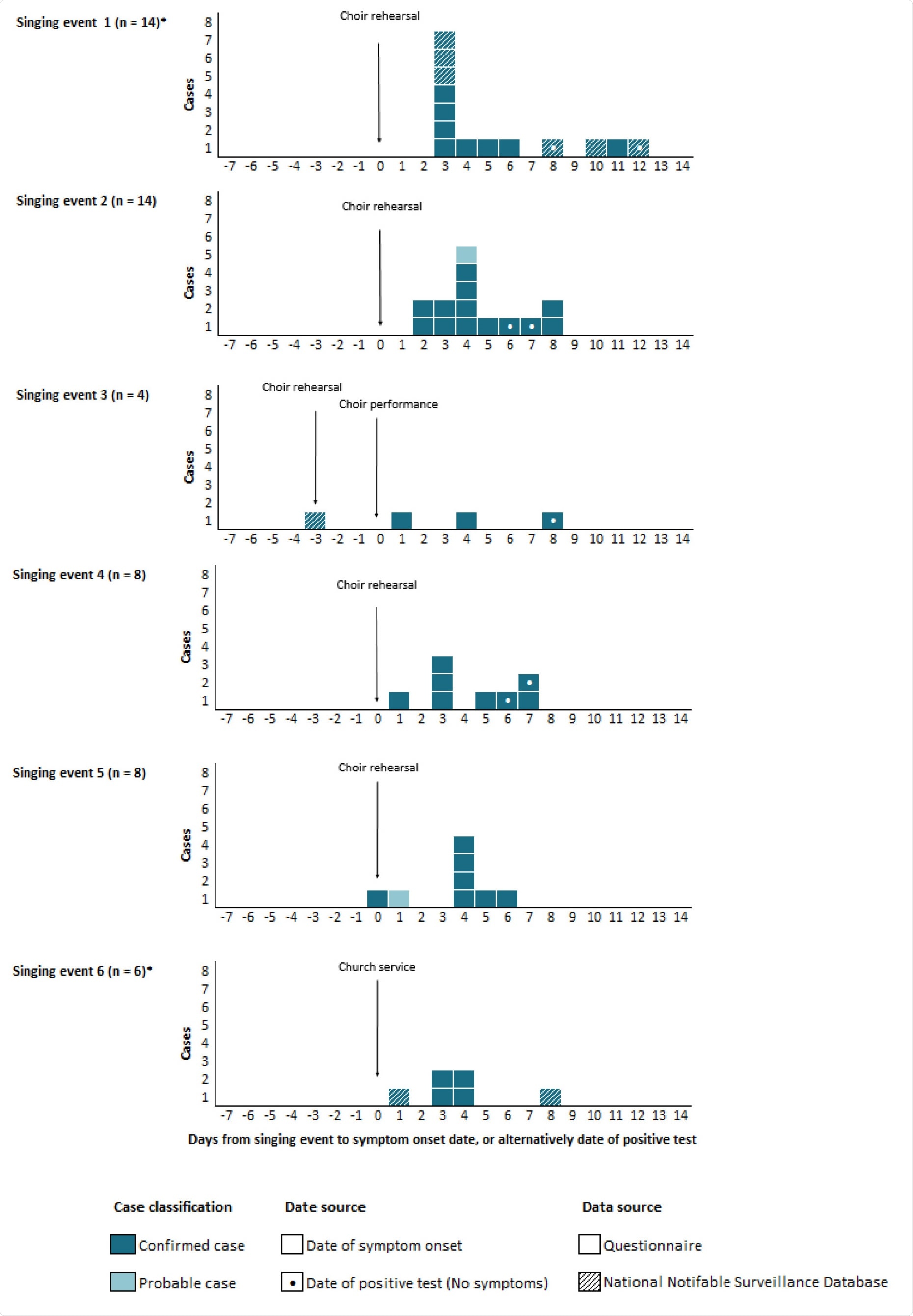 Confirmed and probable COVID-19 cases in each singing event, September–October 2020 by date of symptom onset, or alternatively by date of positive test.

Further, at least one singing group member reported their symptom onset from day 0 to 3 following the event. This shows that during the event, they are contagious, supporting previous studies showing a higher level of shedding before the symptoms develop in terms of SARS-CoV-2 transmission dynamics.

The indirect contact and droplet transmission within the 1.5 meters due to singing is possible if a superspreader is present in the event. One factor that may have influenced transmission is the airflow expelling respiratory droplets over long distances.

The team recommended further studies to determine the role of airflow and the transmission dynamics of SARS-CoV-2 when singing in groups. Phylogenetic analysis and serology tests should be conducted to identify potential source cases or those who are susceptible.

The team concluded that multiple transmission routes might have caused outbreaks in the five clusters. Also, it is possible that airborne transmission due to singing partly led to the high attack rates reported.

Hence, when infection control measures are eased and gatherings allowed, recommendations regarding singing groups are necessary to prevent virus spread.

medRxiv publishes preliminary scientific reports that are not peer-reviewed and, therefore, should not be regarded as conclusive, guide clinical practice/health-related behavior, or treated as established information.