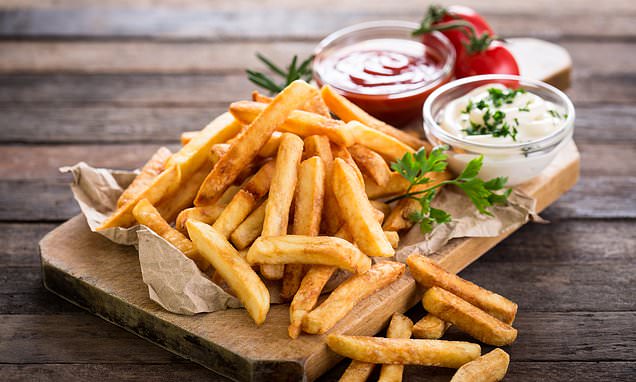 How a Western diet hinders the flu jab: Common additive found in fries, frozen meat and cooking oils ‘reduce the number of immune cells that kill the virus’

Many of us rely on the flu jab to keep us fighting fit during the chilly winter months.

But research suggests the fatty Western diet may be hindering the vaccine’s effectiveness.

Scientists looked at the effect of the food additive tert-butylhydroquinone (tBHQ) – commonly found in cooking oils, frozen meat, chips and crackers – in mice.

They found tBHQ exposure reduces the number of virus-fighting cells in the rodents’ bodies when they battle flu.

And when the animals were exposed to the same virus later, their bodies were less able to recognise – and launch an immune response against – the life-threatening pathogen. 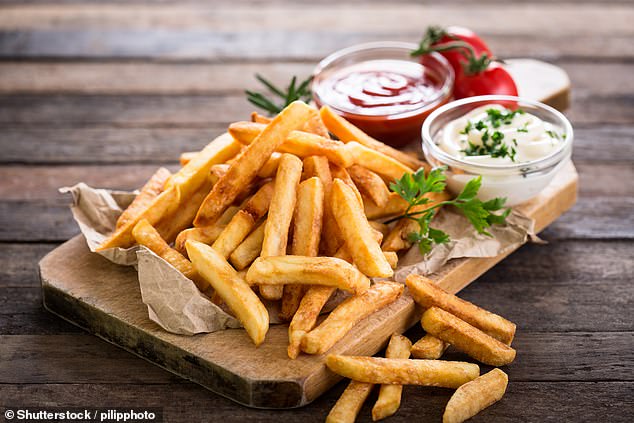 The research was carried out by Michigan State University and led by Robert Freeborn, a fourth year PhD candidate in the department of pharmacology & toxicology.

‘If you get a vaccine, but part of the immune system doesn’t learn to recognise and fight off virus-infected cells, then this can cause the vaccine to be less effective,’ Mr Freeborn said.

‘We determined that when tBHQ was introduced through the diet, it affected certain cells that are important in carrying out an appropriate immune response to the flu.’

Flu was responsible for up to 650,000 respiratory-related deaths worldwide during the 2017/18 influenza season, the authors wrote in their presentation at the 2019 Experimental Biology meeting.

The researchers noted flu death rates are failing to improve despite an increase in the number of people getting vaccinated against the virus.

They wondered whether environmental factors may be worsening the spread of the infection or reducing the jab’s effectiveness.

tBHQ is added to food to extend its shelf life and has been shown to reduce the activation of the immune-cell CD4 in laboratory models.

To test whether the same effect occurs in animals, the researchers added tBHQ to the food of mice in quantities that are comparable to the levels in the Western diet.

It is worth nothing the additive is not always listed on a product’s ingredient list.

Two weeks into the diet, the rodents were exposed to one of four flu strains.

Ten days later, the researchers collected fluid from the animals’ lungs and lymph nodes to measure its CD4 and CD8 T cell levels, which make-up the immune system.

‘CD4 T cells are like movie directors that tell everyone else what to do,’ Mr Freeborn said.

‘The CD8 T cells are the actors that do what the director wants.’

HOW DOES THIS FLU OUTBREAK COMPARE TO THOSE IN THE PAST SIX YEARS?

tBHQ also slowed the activation of the T cells, which reduced their ability to fight infections sooner.

‘Overall, we saw a reduced number of CD8 T cells in the lung and a reduction in the number of CD4 and CD8 T cells that could identify the flu virus in the mice that were exposed to tBHQ,’ Mr Freeborn said.

‘These mice also had widespread inflammation and mucus production in their lungs.

‘Our studies showed that mice on a tBHQ diet had a weakened immune response to influenza infection.

‘In our mouse model, tBHQ suppressed the function of two types of T cells, helper and killer T cells.

‘Ultimately, this led to more severe symptoms during a subsequent influenza infection.’

In a second part of the study, the researchers investigated whether tBHQ affected the rodents’ ability to respond to a flu strain they had encountered before.

But those exposed to tBHQ took twice as long, with them only starting to fight off the infection at day six.

‘This suggests that tBHQ impaired the memory response to infection with related strains of influenza virus, which would be expected to correlate with reduced vaccination efficacy,’ the authors wrote.

tBHQ also caused the mice to lose more weight while battling the infection.

‘It’s important for the body to be able to recognise a virus and remember how to effectively fight it off,’ Mr Freeborn said.

‘That’s the whole point of vaccines, to spur this memory and produce immunity.

‘tBHQ seems to impair this process.’

Although unclear exactly why this occurs, Mr Freeborn believes tBHQ ‘upregulates some proteins which are known to suppress the immune system’.

His team are planning to investigate the additive’s impact in human-blood samples.

In the meantime, the best way to avoid these effects is to eliminate, or minimise, tBHQ from your diet.

‘It can be hard to know if you are consuming tBHQ, as it is not always listed on ingredient labels,’ Mr Freeborn said.

‘Since tBHQ is largely used to stabilize fats, a low-fat diet and cutting down on processed snacks will help reduce tBHQ consumption.’

Mr Freeborn also stressed getting the flu jab every year is the best way to protect yourself against the infection.

The rocketing number of flu cases in the UK and across the world was put down to a surge in four aggressive subtypes that attacked the population simultaneously.

One included the so-called ‘Aussie flu’, a strain of influenza A which triggered triple the number of expected cases in Australia during the country’s winter.

Experts feared the virulent H3N2 strain, which reached the UK, could prove as deadly to humanity as the Hong Kong flu in 1968, which killed one million people.

Another was a strain of influenza B, called Yamagata and dubbed ‘Japanese flu’, which was blamed for the majority of cases during the UK’s winter.

Its rapid spread raised concerns because it was not covered in a vaccine given to the elderly. However, experts claim it was less severe.

Usually, just one subtype, of either influenza A or B, is responsible for the majority of cases. The bug spreads easily in the cold weather.