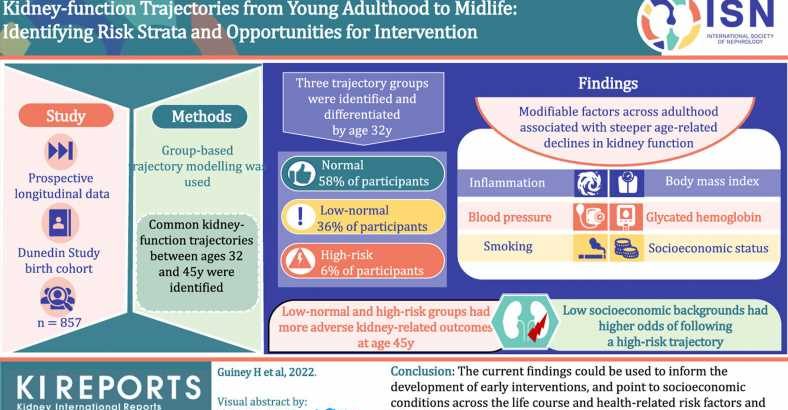 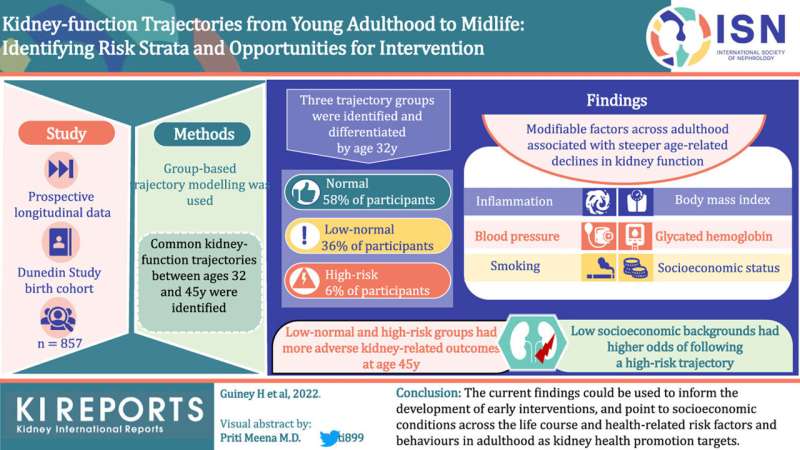 People who grew up in deprived socioeconomic conditions, or who were overweight in childhood, are more likely to have poorer kidney function in their 30s and 40s and are more at risk of developing chronic kidney disease as they get older, a University of Otago study has shown.

Lead author Dr. Hayley Guiney, of Otago’s Dunedin Multidisciplinary Health and Development Research Unit, says kidneys play an important role in our health by filtering waste products from our blood, controlling blood pressure and regulating levels of salt, water, and other chemicals in our system. Their function can decline with age.

“Poor kidney function is usually associated with older age and most of the research to date, focuses on older adults. But as aging is a gradual process, we wanted to understand how kidney function changes before the age of 45, can we detect early changes in kidney function that will then lead to impaired kidney function as we age, and what are some of the risk factors,” she says.

The researchers found about 6 percent of people’s kidneys were functioning poorly for their age, and another 36 cent had some signs of lower-than-normal function.

“No-one yet had chronic kidney disease, but those two groups were on a path that put them at higher risk of developing kidney problems as they continue to age.

“We could see that growing up in a socioeconomically deprived household or being overweight in childhood increased the risk that someone might be on one of these riskier paths.

“When they were adults, people who had high blood pressure, were overweight, had high systemic inflammation, were at risk for diabetes, smoked, or were living in deprived socioeconomic conditions, showed faster declines in kidney function between the ages of 32 and 45,” Dr. Guiney says.

However, as with many diseases, early intervention is key to preventing or slowing the onset of chronic kidney disease.

Dr. Guiney believes the study underscores the need for public health attention and investment into the prevention of chronic kidney disease.

“We’ve shown that people can make changes in adulthood that should help keep their kidneys healthy for longer, like maintaining healthy blood pressure, a healthy weight, and reducing smoking.