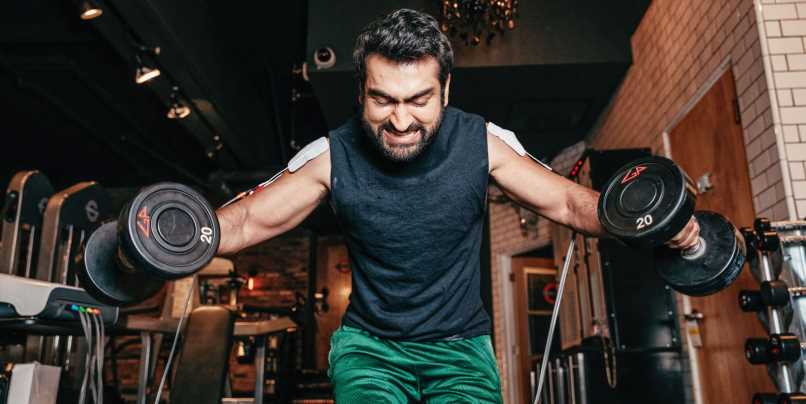 Kumail Nanjiani is in a dimly lit basement weight room in Beverly Hills called the Granite Gym, electrical wires attached to his back. Elbows in two cloth cradles, he grunts through reps of a modified lat pulldown as his trainer, Grant Roberts, delivers electric charges to his back muscles.

“You ready?” Roberts asks. “Never,”Nanjiani says. Roberts fires another shock anyway, and Nanjiani’s lats quiver. Then he does another rep.

The 41-year-old is hoping all that voltage (okay, only 70 milliamps, but still!) can fast-track his transformation from comedic actor into action star. Nanjiani made his name by making you laugh in The Big Sick and HBO’s Silicon Valley, and he’ll do that again in Men in Black International this summer. But his next role, rumored to be in a major comic-book film, involves a makeover. “I realize what’s holding me back from those roles is how I look,” he says. “So I’m changing that.” 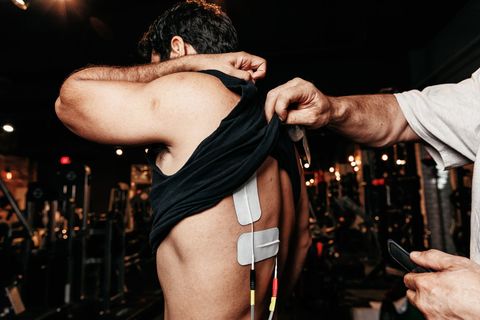 To that end, Nanjiani’s been trudging down to Granite five days a week for the past three months to train with Roberts, a former Mr. Canada. Roberts uses electronic stimulation (e-stim to trainers) to help fire up target muscles—and it’s a strange sensation. But Nanjiani is fully on board, absorbing milliamps and grinding out reps.

It’s just one technique Roberts is deploying to catapult his client onto the action-hero A-list—a major leap for an actor who came to Hollywood after growing up in Pakistan and attending college in Iowa. Before he met Roberts, Nanjiani had been your average gym goer, riding the stationary bike to nowhere for 20 minutes a day. Now his workouts draw from the bodybuilder playbook, and his trademark wit has been replaced by a thousand-yard stare.

“When I’m exercising, I’m not thinking about anything else,” he says.“It’s like meditation.” That may be why Nanjiani’s friends “practically staged an intervention” a few months ago to get him out of the gym. The last thing they want is a T-1000 clone of Nanjiani replacing Silicon Valley’s Dinesh. “Effort isn’t funny,”he says. “Several of my friends have said, ‘There’s nothing funny about a guy who works out all the time.’” Nanjiani doesn’t care. “I’m kind of obsessed with it.”

Even when he’s not hooked up to diodes, Nanjiani thinks about the gym. His diet is so squeaky-clean that Roberts has to nudge him to carb up on cheat day. The actor’s goal: slap 20 pounds of muscle onto his 150-pound frame. No joke.

But he insists he’s not turning his back on comedy; rather, he’s expanding his acting range. “Look at Bruce Willis in Die Hard,” he says. “He was very funny while staying true to the tone of the movie.” In the process, the TV lightweight became one of the heaviest hitters in Hollywood.

Nanjiani has his eyes on a similar prize. “If I can be a big, buff person with the same outlook I have now, that would be pretty cool,” he says. “There aren’t many people around like that. 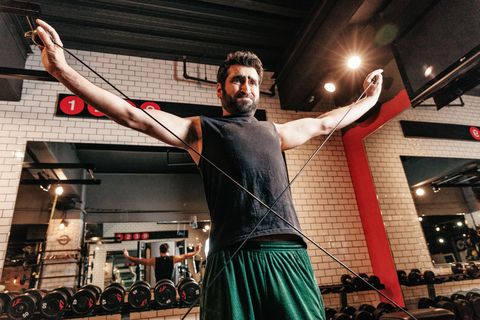 “Pakistani food is delicious, but it’s a lot of carbs: biryani, naan bread, tons of rice. Afterward, my wife and I will say, ‘Let’s take a quick nap.’We wake up five hours later.”

“Basically, it’s five days of low-carb, then over the weekend you eat as much as you want. But I’m trying to figure out the food thing right now because I wasn’t eating enough. I’m still kind of afraid of gaining the wrong kind of weight, because I’m very vain.”

“My favorite comedic actor growing up was Bill Murray.He’s the opposite of effort. He’s really not trying at all.”

“I grew a beard because I needed a crutch to start working out intensely. But it’s going well now, so I’m going to shave it.”

The Break of Brawn 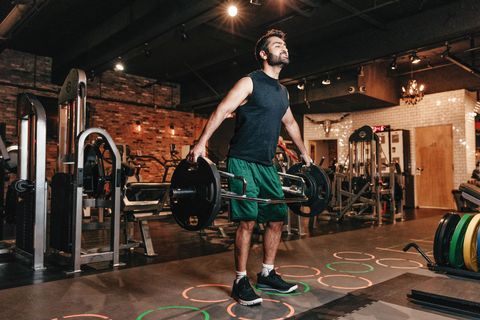 Nanjiani’s spent extra time (and electricity!) building action-hero shoulders. Want to bulk yours up? Try his workout; all you need are dumbbells and a bench.

Do the first 3 moves as a triset, one right after the other, using the same dumbbells. Do
3 rounds, resting 60 seconds between each round. Then do exercise 4.

Stand with dumbbells at your sides, palms facing in. Without swinging, raise the weights in front of you until your arms are parallel to the floor. Pause, then lower to the start. That’s 1 rep; do 5 to 8.

Stand holding dumbbells in front of your thighs, palms facing in. Raise the dumbbells directly out to your sides, elbows bent slightly. Pause, then lower to the start. That’s 1 rep; do 5 to 8.

Bend your knees and hinge your torso forward, keeping your back flat, arms hanging. Raise the dumbbells out to your sides. Pause, then lower to the start. That’s 1 rep; do 5 to 8.

Sit on a bench, holding dumbbells at your shoulders. Press the dumbbells up and outward; pause when your arms are nearly straight. Return to the start. That’s 1 rep; do 3 sets of 12 to 15.