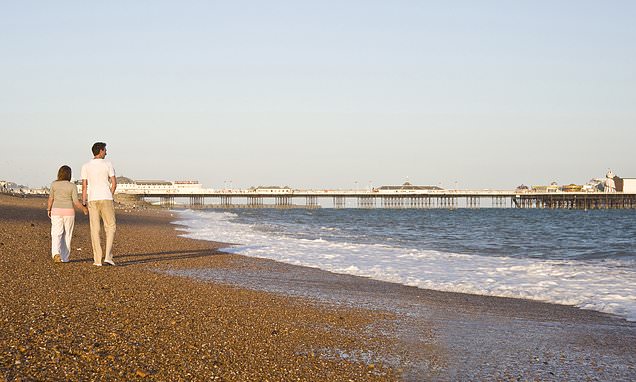 Poorer people may be ‘42% less likely to suffer from depression, anxiety or other mental health issues if they live within a mile of the coast’

Poor people may be less at risk of depression if they live by the seaside, research suggest.

Scientists from the University of Exeter analysed the incomes and residences of nearly 26,000 people.

They found the lowest-earning participants were 42 per cent less likely to report a mental health problem if they lived within 0.6 miles (1km) of the coast.

This is compared to volunteers who resided more than 50km (31 miles) away.

A stroll along the beach is thought to boost mental wellbeing by reducing stress, providing access to ‘clean air’ and giving people an opportunity to socialise. 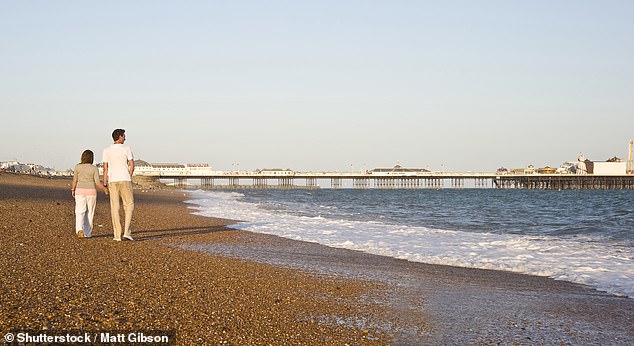 ‘When it comes to mental health, this “protective” zone could play a useful role in helping to level the playing field between those on high and low income.’

Around one in six adults (17 per cent) in England experience mental health problems like anxiety or depression, the scientists wrote in the journal Health and Place.

In the US, nearly one in five are said to suffer, National Institute of Mental Health statistics show.

While it is normal to feel down from time to time, people with depression may feel persistently unhappy for weeks or months on end.

Depression can affect anyone at any age and is fairly common – approximately one in ten people are likely to experience it at some point in their life.

Depression is a genuine health condition which people cannot just ignore or ‘snap out of it’.

Symptoms and effects vary, but can include constantly feeling upset or hopeless, or losing interest in things you used to enjoy.

It can also cause physical symptoms such as problems sleeping, tiredness, having a low appetite or sex drive, and even feeling physical pain.

In extreme cases it can lead to suicidal thoughts.

Traumatic events can trigger it, and people with a family history may be more at risk.

It is important to see a doctor if you think you or someone you know has depression, as it can be managed with lifestyle changes, therapy or medication.

Worrying about money is a recognised cause of depression, according to the charity Mind.

This is a vicious cycle, with depressed people then being less able to manage their finances.

Exposure to green spaces – such as fields, parks and public gardens – has repeatedly been linked to a reduced risk of mental health issues.

However, the effect of blue spaces – like coasts, rivers and lakes – was less clear.

To learn more, the scientists used the Health Survey for England to compare people’s wellbeing relative to their proximity to the coast.

Among the lowest-income participants, those who lived less than a 1km from the sea were 42 per cent less likely to battle with their mental health.

Those who resided up to 3.1 miles (5km) from the coast were 24 per cent less at risk, the results show.

This remained true even after the scientists adjusted for other factors that influence mental health, such as long-term illness.

The same benefits were not found to occur among the more affluent participants.

The study did not set out to uncover how coastal living boosts mental wellbeing.

The scientists believe, however, easy access to the seaside has the same benefits as green spaces.

‘It could be exposure to coastal environments improve mental health through a range of potential mechanisms in the same way as has been proposed for green space’, they wrote.

‘[These include] reduced stress, improved air quality and immune functioning, and increased opportunities for social contact and physical activity.’

Past research suggests the ‘positive relationship between living in more natural environments and mental health is stronger within socioeconomically deprived groups’, the Exeter scientists wrote.

A study also found ‘recreational visits to the English coast, particularly walking, are more likely to be made by people from some lower socioeconomic backgrounds as compared to other natural environments’.

The results come as the public body Natural England prepares to open access to all of the country’s coastal paths by 2020.

‘This kind of research into blue health is vital to convincing governments to protect, create and encourage the use of coastal spaces,’ Dr Mathew White, environmental psychologist at the University of Exeter, said.

‘We need to help policy makers understand how to maximise the wellbeing benefits of ‘blue’ spaces in towns and cities and ensure access is fair and inclusive for everyone, while not damaging our fragile coastal environments.’

‘It’s crucial our natural and urban landscapes are sufficiently funded and protected in the future to ensure everyone can benefit from these “blue” spaces.’