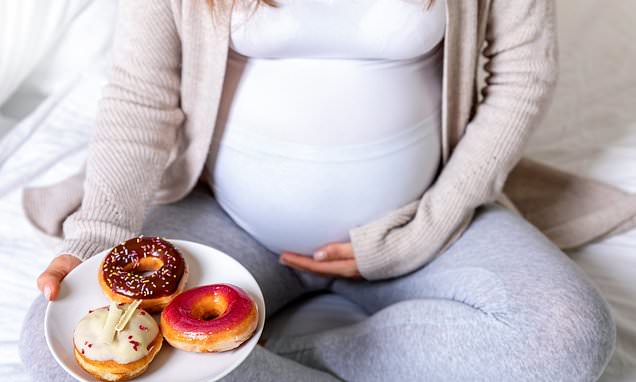 HALF of pregnant women in the UK are either obese or overweight and face a greater risk of suffering a miscarriage or stillbirth, report warns

More than half of pregnant women in Britain are overweight or obese, a major report has shown.

Data found 50.4 per cent of expectant mothers tipped the scales at their first NHS appointment between 2016 and 2017.

This is up from 47.3 per cent the previous year, according to statistics collected from 714,000 mothers-to-be.

More than 18,000 of these women were deemed morbidly obese, which is the fattest possible category.

Being obese or overweight increases the risk of miscarriages and stillbirths, and can prevent babies from developing properly in the womb. 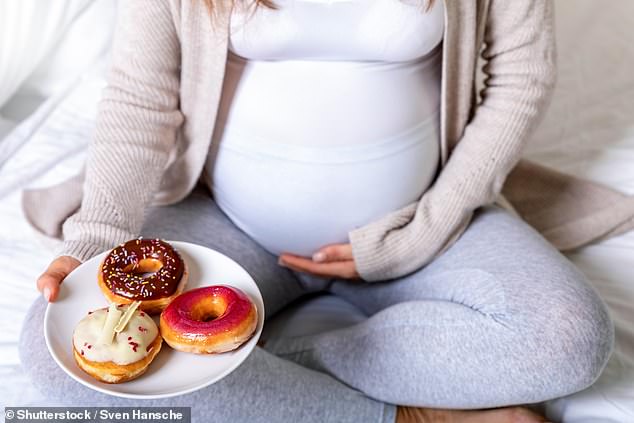 More than half of pregnant women in Britain are overweight or obese, a major report has shown

Research has shown youngsters born to overweight parents are much more likely to become fat themselves, leading to type 2 diabetes and heart disease.

A BMI over 30 also triples the risk of gestational diabetes and high blood pressure for the mother.

The new National Maternity and Perinatal Audit accounted for 97 per cent of all births in the UK between April 2016 and March 2017.

Professor Russell Viner, president of the Royal College of Paediatrics and Child Health (RCPCH), said: ‘For the first time, over half of women are being recorded as overweight or obese during pregnancy.

‘Every parent wants to give their baby the best start in life, however this raises several red flags for both women’s and children’s health.’

DOES OBESITY INCREASE THE RISK OF MISCARRIAGES?

Our in four women with a BMI over 30 – defined as obese – miscarry before 12 weeks. This is compared to one in five who are of a healthy weight.

Although unclear exactly why this occurs, scientists believe overweight women have higher levels of the hormone insulin in their blood, which may later the lining of the womb and affect embryo development.

Carrying dangerous amounts of weight also raises the risk of pregnancy complications, such as high blood pressure and bleeding, which can result in an miscarriage.

He said: ‘For mothers, being overweight during pregnancy comes with significant risks including gestational diabetes, pre-eclampsia, miscarriage and postpartum haemorrhage.

‘Women must be supported before conception, during pregnancy and after birth to ensure the healthiest possible outcome for both themselves and their child.

‘With the right support, it is possible to stop this dangerous cycle from being repeated.’

The report also found there was a  discrepancy in the number of babies developing brain injuries in the first three days of life at certain NHS trusts.

Around one in every 1,000 babies born between 35 and 42 weeks develop the brain injury, known as encephalopathy.

But the researchers noted a number of trusts and boards that had higher levels of encephalopathy than expected.

For example, the number of children who developed an encephalopathy in England was 20 per cent more than in Scotland.

They said more needed to be done to look at variation across the health service.

Variation between hospitals was also noted for the percentage of women suffering serious tears during labour or experiencing major bleeding after birth.

The rate of instrumental births – using forceps or ventouse – varied from 6.8 per cent to 18.4 per cent among maternity services.

Professor Lesley Regan, president of the Royal College of Obstetricians and Gynaecologists (RCOG), said: ‘All women should expect to receive the best possible care during pregnancy and childbirth.

‘National initiatives to improve maternal and neonatal care are making impressive headway to ensure services are as safe and personalised as possible for women, the vast majority of whom have a safe birth.

‘But we must not be complacent since this report highlights marked variation in standards of care persist, particularly around birth complications, such as severe perineal tearing and obstetric haemorrhage.’

The report also found a small increase in the number of women being induced into labour after 40 weeks (28 per cent to 29 per cent).

There was also a decrease in the number of babies born underweight in England – falling from 55.3 per cent to 52.3 per cent.

WHAT IS OBESITY? AND WHAT ARE ITS HEALTH RISKS?

Obesity is defined as an adult having a BMI of 30 or over.

A healthy person’s BMI – calculated by dividing weight in kg by height in metres, and the answer by the height again – is between 18.5 and 24.9.

Among children, obesity is defined as being in the 95th percentile.

Percentiles compare youngsters to others their same age.

For example, if a three-month-old is in the 40th percentile for weight, that means that 40 per cent of three-month-olds weigh the same or less than that baby.

The condition costs the NHS around £6.1billion, out of its approximate £124.7 billion budget, every year.

This is due to obesity increasing a person’s risk of a number of life-threatening conditions.

Such conditions include type 2 diabetes, which can cause kidney disease, blindness and even limb amputations.

Research suggests that at least one in six hospital beds in the UK are taken up by a diabetes patient.

Obesity also raises the risk of heart disease, which kills 315,000 people every year in the UK – making it the number one cause of death.

Carrying dangerous amounts of weight has also been linked to 12 different cancers.

This includes breast, which affects one in eight women at some point in their lives.

Among children, research suggests that 70 per cent of obese youngsters have high blood pressure or raised cholesterol, which puts them at risk of heart disease.

And if children are overweight, their obesity in adulthood is often more severe.

As many as one in five children start school in the UK being overweight or obese, which rises to one in three by the time they turn 10.