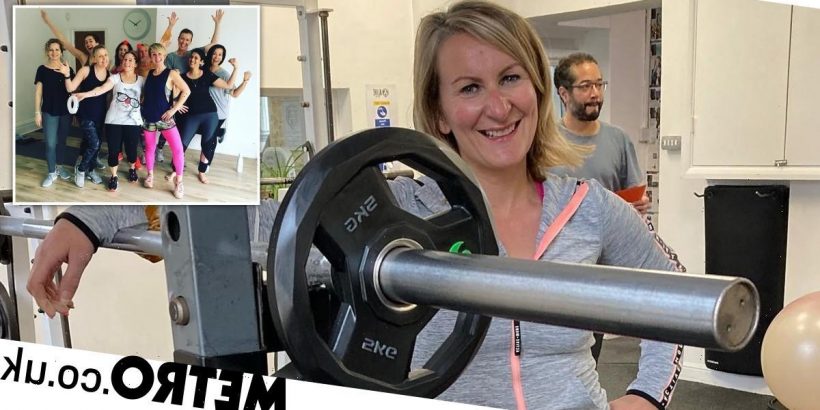 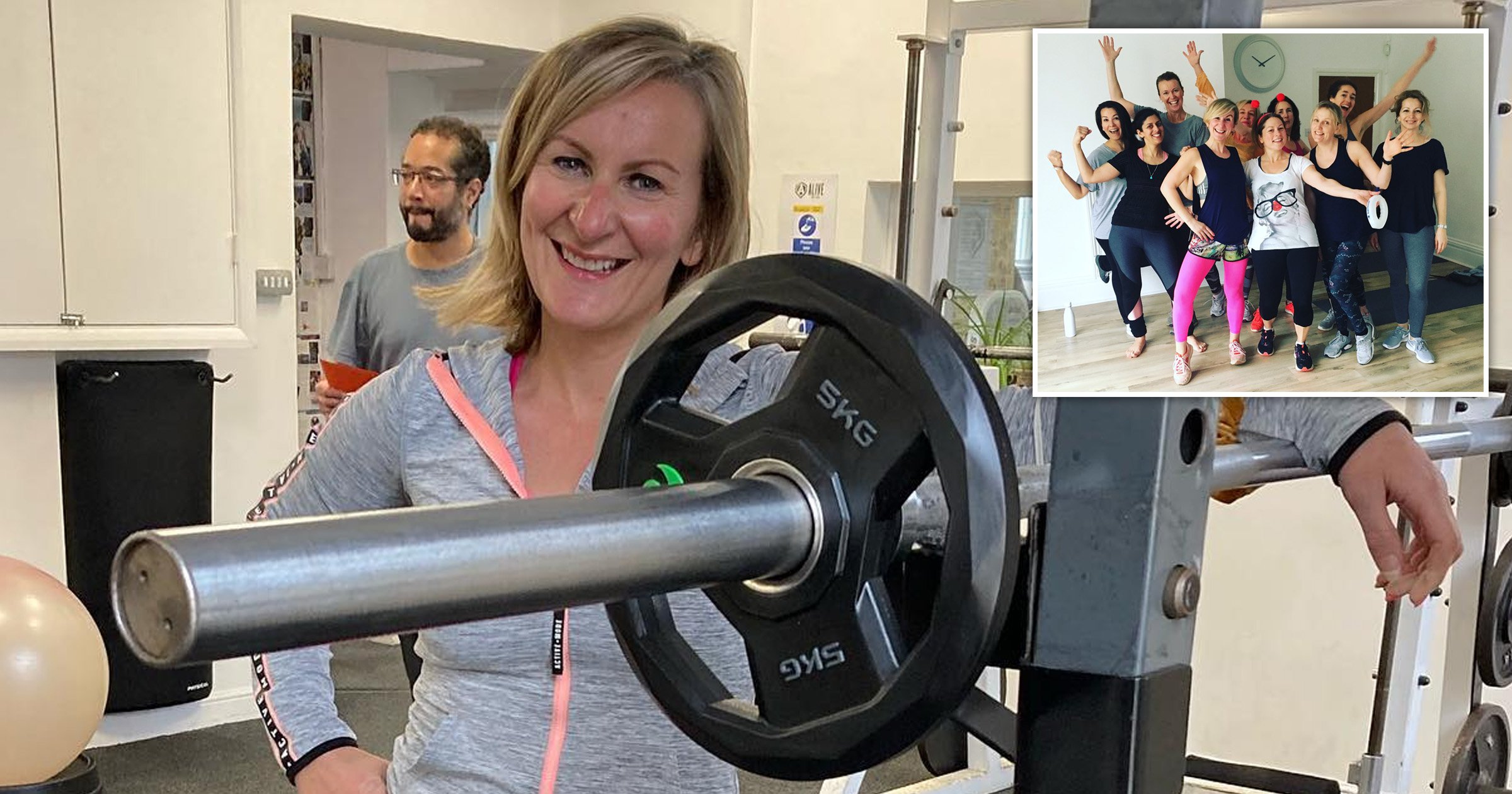 A mum who battled anorexia has transformed her relationship with food – and now runs a fitness business to help women feel good.

Christine Chessman, 46, had anorexia as a young teenager, and was told by doctors she ‘could have a heart attack at any time’ due to her significant weight loss.

But she has since worked hard to change her relationship with food, and now helps other women to ‘feel good in their bodies’.

The mum-of-two who lives in Hove, Sussex, explained that she had a ‘traumatic upbringing’ in Belfast during the Troubles and was hit by a car at the age of 11, which affected her confidence – leading to her feeling shy and self-critical in her teens.

She said she ‘never felt pretty’ during her younger years and ‘never quite felt good enough’.

This led to her implementing a strict diet and exercise regime and, at her lowest point, Christine weighed under five stone.

‘It was really when I was probably about 13,’ Christine said.

‘So, I put emphasis on my looks, and that’s how I then started being able to cope with thing. I started restricting what I was eating.’

Christine began to lose weight very quickly through strict dieting and physical activity, and disordered exercise behaviours started to creep in to her daily life.

She would do exercises in her bedroom, walk for miles instead of getting the bus, and do fitness classes at home.

As Christine’s weight decreased, she started receiving more and more compliments from her peers.

‘Everybody was saying, “you look amazing, what are you doing?”,’ Christine said.

‘So that just fuelled me to keep going and keep going, and I felt a sense of, “wow, look at me, I can eat so little”.

‘But then it’s not a diet any more, then it becomes something different, and, for me, it took on a life of its own and I became anorexic.’

Christine’s weight dropped to under five stone when she was 14. Her hair started falling out, she was cold all the time, and became so weak that she was unable to climb up the stairs.

Things became ‘really scary’ when she was told by doctors that she could have a heart attack at any time due to her low blood pressure and slow heart rate.

Christine, who used to be an IT manager but is now a non-diet strength and movement coach, said: ‘It started becoming just painful and difficult, and I didn’t want to go out with my friends because they would always go out to eat.

‘I was becoming more socially isolated and unable to do schoolwork, and my blood pressure got incredibly low, to the point that they told me I could have a heart attack at any time.

‘But then there was a massive part of me that wanted to live, and I wanted to be different, and I knew that to get there, I had to eat.

‘I stopped feeling like, “oh, look at me,” and I just started feeling really sad.’

Christine said her anorexia went unnoticed for months, and it wasn’t until her German teacher spotted her dramatic weight loss that she got the help she needed.

At the age of 15, Christine went to hospital as an outpatient and had blood tests, weigh-ins and help from dieticians. She also received counselling for roughly six months.

Her weight increased from under five stone relatively quickly and she said her counsellor gave her ‘that desire to live and to find joy again’.

However, given the rapid change in her body, Christine felt uncomfortable with her new physique, and while she appeared healthier on the outside, she said she was still ‘so unhappy’.

The mum-of-two said she started implementing numbing behaviours, such as drinking a little bit more alcohol in her 20s, not buying chocolate, and running marathons.

She explained that she was so miserable for much of her 20s and 30s because her struggles were ‘always hidden’, and that made her feel even more alone.

She said: ‘I constantly watched what I ate, I constantly punished myself for what I ate, making up for it with exercise, eating less. I didn’t have a “normal” relationship with food until very recently.

Christine continued to make slow improvements and had ‘moments of joy’, including having her two daughters, Mia, 13, and Erin, 14.

But in her late 30s, she developed Body Dysmorphia Disorder (BDD) and became obsessed with her hair and how it looked.

She said she thought that her hair was ‘awful’. She would straighten it, constantly try to look at her hair in mirrors, and would see strangers and think, ‘I’d do anything to have their hair’.

This then morphed into a fixation with her skin, where she would buy potions and lotions and scrubs, and do everything she could to keep her skin clean and spot-free.

She started washing her bed sheets every day, wearing a fresh T-shirt every evening, filming herself, and taking photographs of her skin in mirrors.

This all changed when she asked her daughter to take a picture of her back so she could see what it looked like, as Christine realised that she was outwardly displaying her unhealthy behaviours to her children.

‘That really shook me because I had done so much to protect them from these behaviours,’ Christine said.

‘I think that was the turning point for all of it and that certainly coincided with my business changing, for it to be part of the non-diet space and to really empower women to move their bodies as they are, and feel good in their bodies.

Christine started her business, Hello Fitness Brighton, in 2013 and it has gone from strength-to-strength.

She teaches various classes, including boot camps, HIIT workouts and Pilates, from her home studio, outdoors, through her app and on the platform called Body Image Fitness.

Christine explained that she connected with other fitness professionals through social media, which was enormously helpful, and she ‘wanted to do things differently’ – focusing on strength and movement instead of calories and the diet culture mentality.

‘It’s really about changing the focus to how we feel about movement, how movement makes us feel, and how we feel in our bodies rather than about how we look,’ Christine said.

Christine’s journey has not been an easy one, but now she wants to inspire others and continue to ‘build women up’.

She explained: ‘What kept me going is I always had this feeling that I had a life’s mission.

‘I always had a feeling that there was a reason that I got so ill and that I could do something good with it.

‘I always felt the anorexia wouldn’t be for nothing, that I could come out the other side and do something, so that’s always been the driver of the business as it is now, definitely.’

For more support and information about eating disorders, visit: www.beateatingdisorders.org.uk