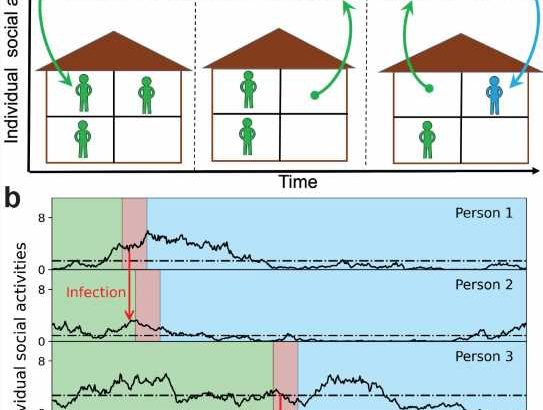 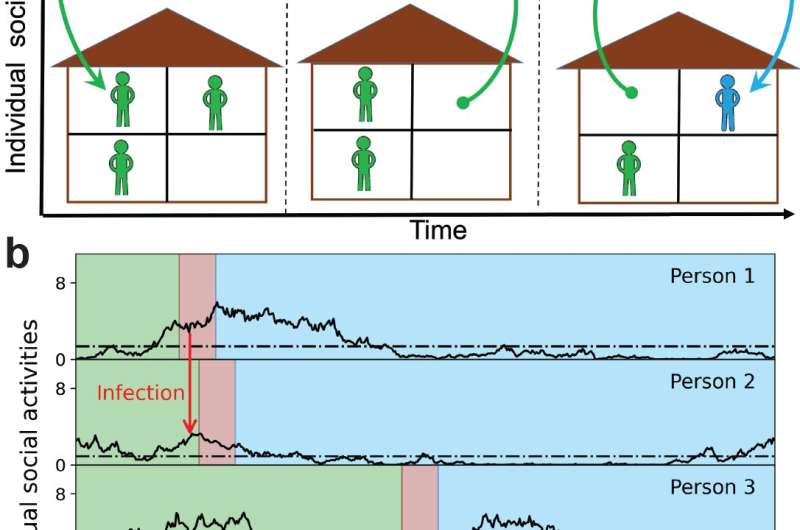 To better understand the factors governing the wave and plateau dynamics of the spread of COVID-19, a team of scientists at the U.S. Department of Energy’s (DOE) Brookhaven National Laboratory, the University of California San Diego (UCSD), and the University of Illinois Urbana-Champaign (UIUC) has developed an epidemiological model inspired by real-world observations based on proximity data, like the fact that any given individual’s social activity tends to happen in bursts over short time scales, with longer in-between periods reverting to average sustained social-activity levels.

The new model—dubbed the stochastic social activity (SSA) model—was paired with a traditional epidemiological model and validated against empirical data taken from four U.S. regions before introducing COVID-19 vaccines. Stochastic refers to individual social activity being random and unpredictable, a variable that can nevertheless be captured in mathematical equations through probability distributions that are averaged out over time.

The new model builds on the team’s earlier work published in April of this year in the Proceedings of the National Academy of Sciences that showed the concept of “herd immunity” does not apply to the COVID-19 pandemic, because this type of collective immunity to the disease turns out to be short-lived. Instead, what emerges is a fragile and temporary state of collective immunity, which they coined “transient collective immunity” (TCI). The prior study also considers individual differences in the size of social networks.

The team reports in the current work that this newly accounted-for random dynamic factor will always produce waves or plateaus of infections—like those seen throughout the pandemic—whether the model also accounts for individuals’ changing their social behavior based on knowledge of current infection rates. The model further tells us that COVID-19 may be here to stay—it shows a clear path for it to become endemic in the global population, much like the common cold or the flu. “Our new model describes three phenomena: why during a pandemic, a wave stops; how it can progress at a nearly constant rate, forming a plateau; and why new pathogens actually stay with us permanently, entering what’s called an endemic state. Classical theory tells us when a new pathogen is introduced, it will eventually kill itself off by infecting enough people that herd immunity is developed, unless biological immunity is very short-lived. But even in the case where long-term biological immunity is developed, we explain the scenario of how a new pathogen stays endemic in a population,” notes lead author and physicist in the Theory and Computation Group at the Center for Functional Nanomaterials (CFN), a DOE Office of Science User Facility at Brookhaven Lab, Alexei Tkachenko.

“What we are providing here is yet another factor that contributes to the dynamics of a pandemic that consists of multiple waves. In our case, our waves are caused exclusively by changes in the time-averaged level of social activity of individuals. The fluctuations in activity level led to a significant change in the propagation of the epidemic in waves and plateaus,” adds Sergei Maslov, University of Illinois Urbana-Champaign professor of bioengineering and physics and Bliss Faculty Scholar.