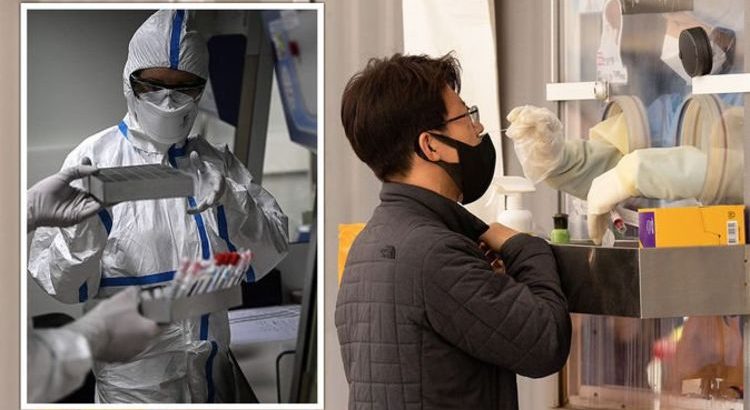 Jonathan Van-Tam says 'no time to delay' over Omicron variant

Omicron, also known by its other official designation B.1.1.529, first cropped up in Botswana last week. Officials quickly leapt to action, suspending travel from six African nations, South Africa among them. But that has since proved somewhat fruitless, as cases have successfully travelled far beyond their origin point.

Which countries have reported the Covid variant?

Decisive action has failed to hold off Omicron, which has started as a trickle beyond African borders.

The UK, which has some of the world’s most advanced sequencing technology, is currently among those affected.

Scientists have identified 14 cases so far, but they fear “dozens” may have escaped surveillance.

Another 14 countries have made similar discoveries, many far further afield.

Ultimately, the reported figures likely serve as a snapshot of the overall picture, as they currently depend on sequencing advancement.

Dr Harries said cases would increase as countries increase “focused contact tracing” and ramp up efforts in this area.

At the same time, officials are working to understand how dangerous Omicron really is.

The variant triggered fears last week, when several governments shuttered borders, as they feared Omicron’s “very unusual constellation of mutations” would allow it to escape immunity provided by Covid vaccines.

Without that immunity, experts warned, it could return the world to “square one”.

But fears have quickly settled, with experts sceptical Omicron could bypass the jab altogether and noting the disease does not appear more deadly than its predecessors at present.

So far, South Africa has reported no hospital admissions or deaths from the variant.

Symptoms have appeared mild and allegedly vary from signs of the base disease.

Doctors believe they include:

Scientists have said a milder variant could speed up the end of the pandemic but that it is too early to tell what it has in store for the world just yet.

As with the other strains, they won’t understand how dangerous Omicron is for a few weeks.

Covid can take up to two weeks to build severity, with most deaths at the latter end of the time scale.

They have, on average, milder symptoms compared to older people.