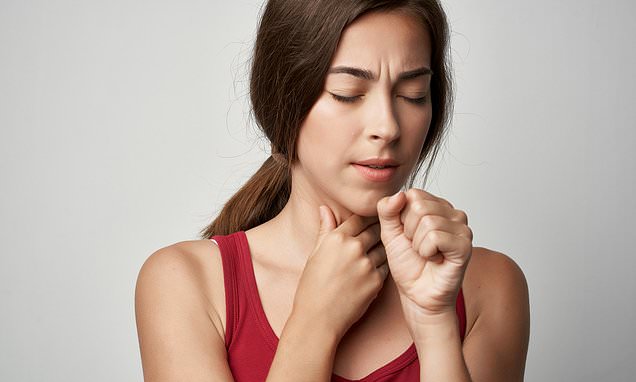 Do YOU have a persistent sore throat? Researchers warn the symptom could be a sign of CANCER in your larynx

Patients who visit their GPs with a persistent sore throat should be considered for larynx cancer, a study suggests.

A sore throat combined with shortness of breath, problems swallowing or earache is a greater warning sign of laryngeal cancer than hoarseness alone, new research concludes.

A study of more than 800 patients diagnosed with cancer of the larynx found more than a five per cent risk of cancer when these symptoms showed, compared to 2.7 per cent for hoarseness alone. 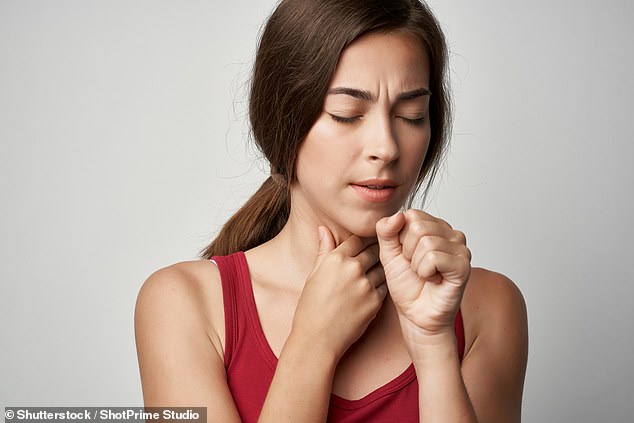 A study of more than 800 patients diagnosed with cancer of the larynx found more than a five per cent risk of cancer from a persistent sore throat combined with shortness of breath, problems swallowing or earache

But the findings from the University of Exeter gives greater insight into the combinations of symptoms GPs should be alert to when deciding who should be investigated for cancer.

What is throat cancer and how many people does it affect in the UK?

Laryngeal cancer is a type of cancer that affects the larynx (voice box).

In the UK, there are about 2,400 new cases of laryngeal cancer each year.

The main symptoms include: a change in your voice, such as sounding hoarse, pain or difficulty when swallowing, a lump or swelling in the neck, a long-lasting cough, a persistent sore throat or earache and in severe cases, difficulty breathing.

It is not clear exactly what causes laryngeal cancer, but the risk is increased by smoking tobacco, regularly drinking large amounts of alcohol, a family history of head and neck cancer, an unhealthy diet or exposure to certain chemicals and substances, such as asbestos and coal dust.

Professor Willie Hamilton, who co-wrote the study, said: ‘This research matters – when Nice guidance for cancer investigation was published there was no evidence from GP practices to guide this, nor to inform GPs.

‘Crucially, hoarseness serious enough to be reported to GPs does warrant investigation.

‘Furthermore, our research has shown the potential severity of some symptom combinations previously thought to be low-risk.’

The research, published in the British Journal of General Practice, was carried out using patient records from more than 600 GP practices as part of the UK’s Clinical Practice Research Datalink.

Each year, more than 1,700 people are diagnosed with cancer of the larynx and, of those, 80 per cent are men.

The numbers have risen by almost a third over the past 20 years, with tobacco and alcohol use strongly linked to the disease.

Lead author Dr Elizabeth Shephard said: ‘The UK still lags well behind the rest of Europe on cancer survival rate, although our research is part of a body of work that is leading to significant improvements.

‘There’s still some way to go and the results of this study really highlight the need to improve the current recommendations for all of the head and neck cancers, which are either incomplete or absent.’