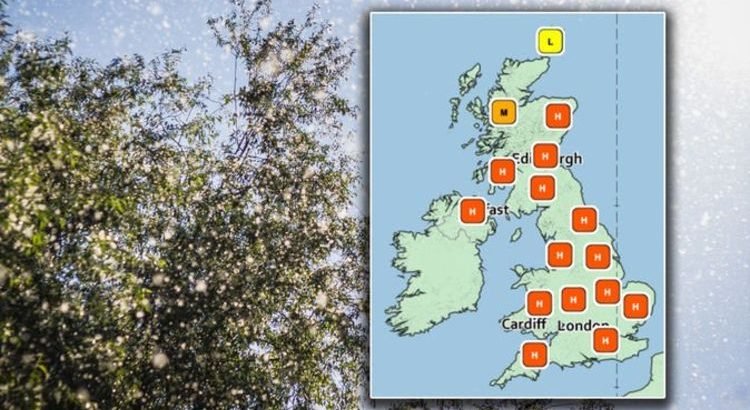 Warm temperatures over the Easter Bank Holiday weekend are expected to trigger high pollen counts in the UK. With around 20 per cent of the UK affected by hay fever, the pollen count spikes could result in large numbers of runny noses and watering eyes this weekend. Almost all of the UK is predicted to have a high pollen count today (Saturday April 20), according to the Met Office. But northwest Scotland can expect ‘Moderate’ pollen levels, with the Orkney and Shetland Islands forecasted ‘Low’ pollen levels.

Warm temperatures this weekend are predicted to cause higher pollen counts

Easter Monday is likely to have the highest average levels of pollen across the UK, added charity Allergy UK.

But, the following Tuesday could also see high levels of pollen in the southwest, it revealed.

“During the spring months pollen from trees is the common culprit for hay fever symptoms,” said the charity.

“Warm temperatures this weekend are predicted to cause higher pollen counts so people living with pollen allergy may experience allergic symptoms including one or more of the following: Sneezing, itchy nose/throat, runny nose, blocked/stuffy nose, red, itchy and watery eyes, and cough, and/or breathing problems.

“Management of hay fever symptoms includes pollen avoidance by reducing exposure, and managing symptoms with hay fever treatments and medication depending on allergic symptoms and how severe these are.”

If you do go outside during periods of high pollen counts, it’s important to reduce your expose to the allergen, said Allergy UK.

When you go back inside after spending time outdoors, you could lower your risk of hay fever symptoms by having a shower straight away.

“Shower when you get indoors and change clothes to remove pollen from the skin, hair and clothing,” it added.

“Plan outside activities carefully to avoid peak pollen times and wear wraparound sunglasses and a hat to prevent pollen getting onto the face and in the eyes.”

It’s also important to keep your windows closed when you’re inside – particularly in the early mornings and evenings, when higher amounts of pollen are in the air.

11 Tips to get you through hay fever season

Hay fever season is upon us once again, here are our top tips to reduce those annoying pollen allergy symptoms.

Avoid parks or fields, particularly in the early evening when there’s a lot of pollen floating at nose level

Putting petroleum jelly around your nostrils could help to trap pollen, and prevent symptoms, said the NHS.

Alternatively, wear wraparound sunglasses to stop pollen from getting into your eyes.

Smoking, or being around smoke, could make hay fever symptoms worse.