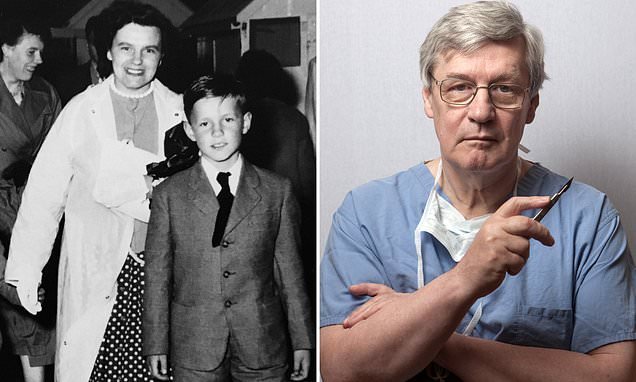 After 35 years on the front line of British medicine, heart surgeon Stephen Westaby has become a bestselling author. Last week, in the first part from his latest book, The Knife’s Edge, he explained how a head injury sustained when playing rugby removed both fear and inhibitions – and turned him into a brilliant surgeon. Today, he tells of his fears for the NHS – and offers his blueprint to save it. 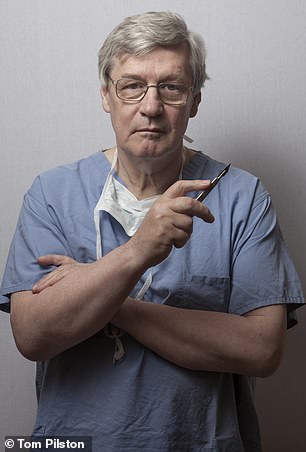 Professor Stephen Westaby, pictured, has worked in the NHS for the past 35 years. He fears the health service, which was founded three weeks before he was born, may be doomed

What do Albert Einstein and our treasured NHS have in common? They were both brilliant for their time, but when they reached 70 they both died from something eminently treatable.

In Einstein’s case, it was an aortic aneurysm for which he persistently refused surgery. For the NHS, I believe, it is the ‘free for all at the point of delivery’ principle that seems impossible to sustain – because Britain’s population is expanding and ageing in tandem and only a proportion of us pay taxes to fund it.

I was born three weeks after the NHS was started and I have always been its greatest champion, but the now deep-seated problems with the service were palpable the day my mother died.

She was 92 and had dementia and severe Parkinson’s, and although my dad was deaf and virtually blind, at 94 he remained my mother’s constant companion. They were happy in their own home.

It was March 2016 when it became clear from her agitation and heavy breathing that the end was near. My father knew the score.

We all wanted her to be comfortable and I knew how to achieve that. When my grandfather was dying from heart failure, his kindly GP came to the house to dispense morphine which helped him on his way. As a junior doctor in the 1970s, I did the same for many desperate patients. It is what compassionate doctors do: it is end-of-life care and common decency.

I call 111 and a dialogue of incomprehensible stupidity begins. The call-handler reads out her lines and a barrage of wholly inappropriate questions. I think to myself: I am a doctor, I know what the patient needs. To remain polite I hold back on my frustration. She is only doing her job. 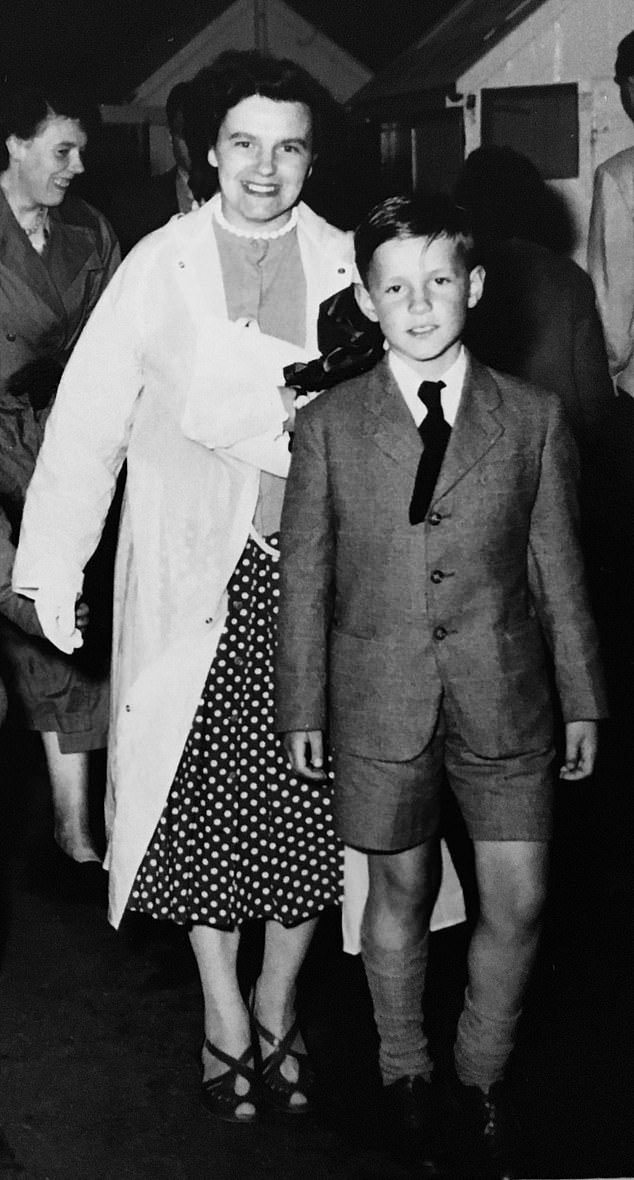 Prof Westaby, aged 12 in 1960 along with his mother, was with her when she passed away in March 2016 aged 94. Prof Westaby, despite being a renowned heart surgeon, had to speak to an NHS call handler who asked ‘inane questions’ before eventually sending a doctor, by which time it was too late

I’m passed to the supervisor, who asks the same inane questions, and eventually I get to speak to a doctor. After some persuading, they agree to send out the single GP who is covering the whole region. It’s ridiculous. I just want my poor mother to have some morphine.

Ten minutes before the GP arrives, and nearly five hours after I’d sought help, my mother’s breathing changes and I know she doesn’t need the doctor any more.

At that moment I felt the system I’d toiled in without a single day of sick leave for more than 40 years had finally let me down. The very sympathetic locum GP was profoundly embarrassed. She described the system as in chaos.

It seemed a fitting testament to a broken NHS. It made no difference that our family was full of doctors. No one was there to help.

To save the NHS we need to pay for it

In the 1990s my colleagues and I each performed 500 to 600 heart operations a year. We were a finely honed production line of cardiac surgery, with a great team and excellent results.

But over the years political correctness has taken hold. We were told we should be spending more time on surgical training, attending outreach clinics in far-flung general hospitals or participating in management meetings. Anything, in fact, apart from doing what we had been trained to do.

Now the six surgeons at my old hospital, part of the Oxford Radcliffe Hospitals NHS Trust, each perform about 150 operations per year, fewer than 1,000 operations a year between all of them. 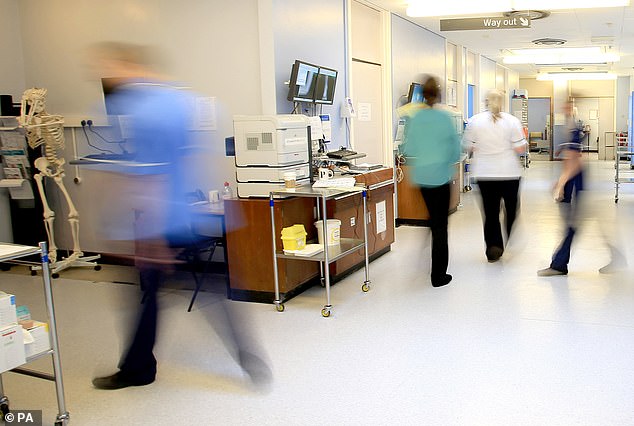 It is clear to me that the NHS needs a radical reboot to ensure we are training enough of our own doctors and nurses, and it clearly needs to support innovation, despite the costs

It is sad because those of us at the sharp end really did want the NHS to be the best. But in my career I have seen much to be critical of: thousands of hospital bed closures over the past decade, the disintegration of mental health and social services, and the damaging alienation of the medical and nursing professions.

And the perpetual overseas recruitment drive that aims to poach trained staff from the developing world is a disgrace.

My own doctor nephews have been working happily in Australia, while only doctors from poor countries want to work in the NHS – and it shows.

We are busy trying to attract medical and nursing staff from Asia and Africa, when these countries need them at home.

It is clear to me that the NHS needs a radical reboot to ensure we are training enough of our own doctors and nurses, and it clearly needs to support innovation, despite the costs.

Almost two decades ago I helped develop an alternative to heart transplantation in the form of a fully implantable heart pump, which can give years of extra life to patients. But they are still not available to the majority of those who could benefit.

Today, heart failure is the only fatal disease with a worse prognosis than cancer. The statistics also show we have higher infant mortality rates and appalling outcomes for cancer and heart attacks compared to many other countries.

All this is not because our surgeons, doctors or nurses are poor. Quite the opposite. If you cut out the bureaucracy and regulations they might be more productive.

In better-functioning healthcare systems there are many more doctors, higher nurse-to-patient ratios and vastly shorter delays to assessment and treatment. There are more scanners, and lifesaving drugs and equipment are introduced in a timely fashion, whatever their cost.

Moreover, such systems are not subject to political ping-pong.

There are excellent healthcare systems in Europe and Australia on which we could model ours.

Yes, they might be based on insurance premiums, but we pay for the NHS out of taxes anyway – it’s just a different kind of premium. These better healthcare systems don’t have to discontinue all of their elective surgery for a month because of so-called seasonal pressures, as if winter were an unexpected event.

It seems as if no one has the guts to dismantle or reform this tarnished treasure for fear of being cast into political oblivion.

We are putting in billions of pounds to transform the NHS, but who can tell you where this money goes or what it achieves? Is it any wonder we – the workers within the system – remain disillusioned?

Red tape kept my friend’s kidney from his son

The bureaucratic failings within the NHS were made shockingly apparent to me when I found myself unexpectedly operating on a very dear friend from medical school, Steve Norton. I got a call late one evening to say he was very ill and needed urgent heart surgery.

Fixing Steve was like replumbing a Victorian house. All the main pipes were buggered and those coming out of the boiler needed to be replaced. But the surgery seemed to be effective, and at 3am I went to see Steve’s wife Hilary and his family to tell them things had gone well.

At 6am I took a shower and stepped into clean theatre blues, celebrated Steve’s apparent recovery with a sausage and egg sandwich and at 7.30am joined the intensive care ward round ready for the next day.

But as part of his illness Steve had already suffered a stroke and his brain started to swell. I heard someone say: ‘If anyone can save him, Westaby can.’ But he couldn’t. Steve’s brain didn’t recover. 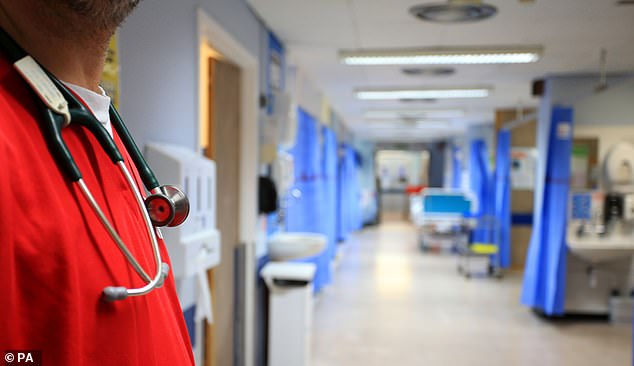 We are putting in billions of pounds to transform the NHS, but who can tell you where this money goes or what it achieves? Is it any wonder we – the workers within the system – remain disillusioned?

Unbeknown to me, both Hilary and her eldest son had congenital polycystic kidneys. And, when I had broken the news, she asked with remarkable composure whether he could be given his father’s functioning kidney.

An organ from his dad would provide the best possible chance of compatibility – same blood group, same genes, no rejection.

For a brief moment I thought I could generate something positive out of this disaster.

I called the director of the transplant service, only to be told that while Steve was conscious he could have voluntarily donated a kidney to his son. Now that he was dead, the family could only request that he become an organ donor and then any transplantable organs would go to the national donor pool.

Those were the rules. The transplant authorities would not allow Steve’s kidney to be used for his son, nor given to Hilary, who was close to needing a transplant herself. Steve died peacefully, surrounded by his family. Because of the bureaucracy, all his organs died with him.

Where was the NHS when I needed it?

When I urgently needed prostate surgery in my late 60s, the best the NHS could offer me, still a busy doctor with decades of service, was a one-year wait for surgery. During that time I’d have needed to continue working with a catheter and a plastic bag full of urine strapped to my leg. I was not prepared to endure the wait so, regrettably, I arranged the procedure privately.

And then, aged 68, discomfort and deformity in my right hand – where the surgical instruments smacked into my palm – forced me to finally curtail my career.

I might no longer be cutting people up but I still work hard for the NHS I passionately believe in.

I’m part of a group working to create a rehabilitation campus in Oxford allowing people to be quickly and safely discharged from hospital after surgery. And despite my grumblings, I remain resolute that British healthcare is up there with the best in the world.

When I trained, then during the early years of my consultant career, we worked in a supportive environment alongside teams brimming with enthusiasm.

Although I was repeatedly chastised for going off piste to save lives, it was usually with the wag of a finger and a grin, followed by the profound gratitude of a relieved family. 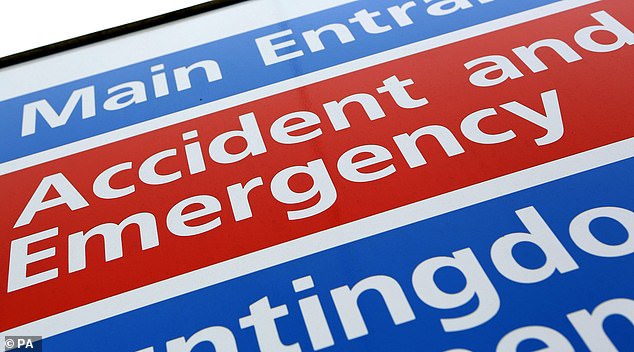 These days it would be instant ‘gardening leave’. So who takes these chances now?

Would I train in cardiac surgery in the current era? Sadly the answer is no.

Would I do it again with my old expansive practice in a well-equipped centre, within an environment where safety mattered more than money? You bet.

I gained inordinate pleasure from helping frightened patients and their families, as well as enormous satisfaction simply from the technical aspects of repairing a failing heart and watching a person walk out of the hospital into a new life.

Fragile lives made better. But we shouldn’t have to jump through hoops for that privilege.