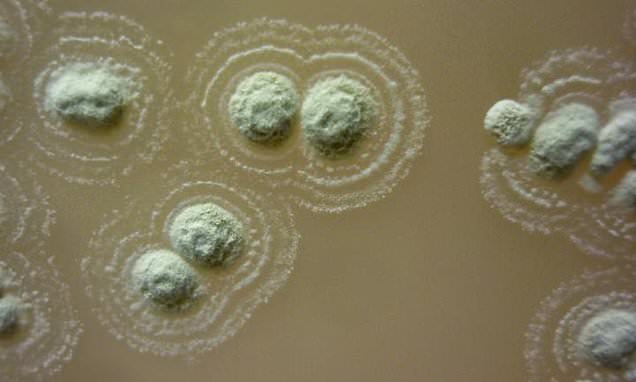 Doctors and scientists are desperately searching for new ways to kill superbugs – and the new finding could pave the way.

A study found dirt from County Fermanagh can stop the growth of drug-resistant bacteria, such as the hospital superbug MRSA.

The discovery has been hailed as an ‘important step forward’ in the progress against antibiotic resistance, considered one of the biggest threats to humanity. 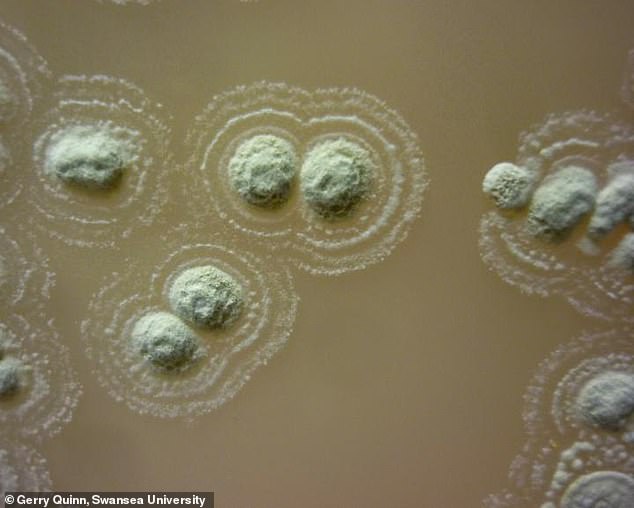 The new bacteria discovered in the soil from County Fermanagh, streptomyces sp. myrophorea (pictured under a microscope) can halt the spread of superbugs including MRSA

The soil from the highlands around the village of Boho, near the border with the Republic of Ireland, has been used as medicine for many years.

It was traditionally wrapped in cloth and used to heal toothache and throat infections, among other ailments, according to historians.

Now, scientists led by a team at Swansea University have discovered it can combat four out of the six most common antibiotic-resistant bacteria.

It is not known whether the soil could have the same effect on the other two common resistant bacteria species, Pseudomonas aeruginosa and Enterobacteriaceae.

But it was also found to be able to stop differently structured bacteria, including gram negative bacteria, which are more likely to be drug-resistant.

‘Our discovery is an important step forward in the fight against antibiotic resistance,’ said Professor Paul Dyson from Swansea University.

WHAT IS ANTIBIOTIC RESISTANCE?

Antibiotics have been doled out unnecessarily by GPs and hospital staff for decades, fueling once harmless bacteria to become superbugs.

The World Health Organization (WHO) has previously warned if nothing is done the world is heading for a ‘post-antibiotic’ era.

It claimed common infections, such as chlamydia, will become killers without immediate solutions to the growing crisis.

Bacteria can become drug resistant when people take incorrect doses of antibiotics or if they are given out unnecessarily.

Chief medical officer Dame Sally Davies claimed in 2016 that the threat of antibiotic resistance is as severe as terrorism.

Figures estimate that superbugs will kill 10 million people each year by 2050, with patients succumbing to once harmless bugs.

Around 700,000 people already die yearly due to drug-resistant infections including tuberculosis (TB), HIV and malaria across the world.

Concerns have repeatedly been raised that medicine will be taken back to the ‘dark ages’ if antibiotics are rendered ineffective in the coming years.

In addition to existing drugs becoming less effective, there have only been one or two new antibiotics developed in the last 30 years.

In September, the WHO warned antibiotics are ‘running out’ as a report found a ‘serious lack’ of new drugs in the development pipeline.

Without antibiotics, C-sections, cancer treatments and hip replacements will become incredibly ‘risky’, it was said at the time.

‘Our results show that folklore and traditional medicines are worth investigating in the search for new antibiotics.

‘Scientists, historians and archaeologists can all have something to contribute to this task.

‘It seems that part of the answer to this very modern problem might lie in the wisdom of the past.’

The researchers, from Wales, Brazil, Iraq and Northern Ireland, were led by Dr Gerry Quinn, who used to live in Boho and knew of the soil’s healing properties.

They found bacteria in the soil – named Streptomyces sp. myrophorea – could inhibit the reproduction of the antibiotic-resistant bacteria, but have not yet worked out how.

Antibiotic resistance occurs when bacteria, viruses or fungi are exposed to a drug so often or incorrectly that they learn to resist being killed by it.

For example, if people do not finish courses of antibiotics or take in small amounts of medicines through eating animal products.

When pathogens are exposed to amounts of drugs too small to kill them, they can learn how to survive treatment.

One high profile infection is gonorrhoea, of which one strain has already become completely resistant to front-line antibiotics.

Dr Quinn said: ‘The discovery of antimicrobial substances from Streptomyces sp.myrophorea will help in our search for new drugs to treat multi-resistant bacteria, the cause of many dangerous and lethal infections.

‘We will now concentrate on the purification and identification of these antibiotics.

‘We have also discovered additional antibacterial organisms from the same soil cure which may cover a broader spectrum of multi-resistant pathogens.’

The team’s research was published in the journal Frontiers in Microbiology.